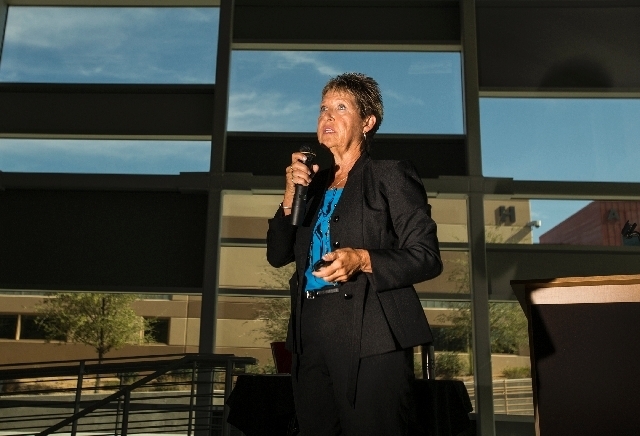 Pam Salazar, chair of the Teachers and Leaders Council, speaks during a school administrators seminar Wednesday at West Career and Technical Academy in Las Vegas.

What if half your performance evaluation was based on your co-workers’ output, not your own?

Those co-workers might not even be in your department or field.

The other half of your evaluation would depend on your supervisor’s observations.

That’s what more than 17,000 of Nevada’s 25,000 public school teachers face under the state’s first mandatory teacher evaluation system. The vast majority of teachers soon will be evaluated on the test scores of students they never saw or subject areas they didn’t teach, or both.

The evaluation system will be piloted and validated using 10 percent of Nevada teachers and principals starting Aug. 26. Florida has tried the same evaluation method and now is embroiled in a federal lawsuit with its teachers union over the constitutionality of evaluating teachers on test scores over which they have no control.

“This is the controversy, as you’d guess,” said Pam Salazar, chairwoman of the Nevada council that created the evaluations, speaking to a sea of faces that rarely, if ever, come together in one place.

But almost all 357 of Clark County School District’s principals were there at West Career and Technical Academy on Aug. 7. And the leaders of the nation’s fifth-largest district wore the pensiveness on their faces. They were beginning their first training with the Southern Nevada Regional Professional Development Program on how to perform the labor-intensive evaluations. And the evaluations also will be pointed in their direction, tying student scores to principals’ evaluations for the first time.

It’s justified, he said. “A radical change is coming.”

He stood at the back of West’s cafeteria watching the principals take in all that’s required of them. It changes their jobs, that of the state’s 25,000 teachers and the education experience of the state’s 440,000 students.

“They were sticker shocked,” Hanlon said of principals, noting that many just found out they must observe teachers in the classroom up to three times a year under a policy approved by the State Board of Education this summer.

Dave Wilson, principal of Chaparral High School near Flamingo Road and U.S. Highway 95, supports the new evaluation system because of the academic improvement it might spur in the bottom-ranked district and state. Being at a turnaround school with extra federal funds, he already has adopted many of the new evaluation mandates at Chaparral and has seen progress. But he will be required to observe probationary teachers — those with three years or less experience in the district — three times a year. With 24 probationary teachers, that’s 72 observations per school year, not including goal-setting and review meetings with those teachers.

“At the same time though, that’s the job of the principal. You’re the principal teacher,” said Barton, describing how all principals will be trained multiple times a month to take subjectivity out of observations as much as possible. “This has never been done but is top priority. It has to be.”

Still, no one has the answer of how to individually evaluate teachers from math to social studies and art. The system is “being built as blindly as one could imagine,” Salazar said.

“It’s not as black and white as people originally thought,” she said, referring to 2011 when Nevada lawmakers and their counterparts in most states mandated for the first time the creation of teacher evaluations based on student performance.

The Nevada council, made up of teachers, administrators and education officials, had to come up with a basic evaluation framework and couldn’t look to other states for much guidance.

“As usual, policy is way ahead of the research,” said Laura Bornfreund, senior policy analyst for the nonprofit New America Foundation.

Almost all states are taking a stab at evaluating teachers and principals using student performance, but they’re finding it’s far more complicated than imagined, she said. “It’s a lot easier to point to those doing it wrong than right.”

Under Nevada’s new system, teachers and school-level administrators earn one of four designations, from ineffective to highly effective, based on their score. The scoring system, not yet constructed, will be split into two equally weighted parts. The first half relies almost entirely on an administrator’s observations of that teacher under five standards. The second half relies solely on student scores from state tests. But the tests are only given in key subjects, namely math, reading and writing, in third through eighth grades, providing direct data for just 30 percent of teachers.

“What the Legislature thought would be a majority of teachers being tested is actually a super-minority,” said Theo Small, a member of the Nevada Teachers and Leaders Council. He taught at Miller Elementary School before being elected this year as vice president of the Clark County Education Association, which represents about 18,000 educators.

The council had to find a way to use student scores for all teachers, as the Legislature required. The council came up with a creative alternative for scoring most teachers. It recommended using schoolwide scores from tested subject areas for teachers of grade levels that aren’t tested and for those in specialty subjects such as music, social studies and art.

Florida did the same and could now be forced to abandon the scoring system if it loses a federal lawsuit, which has some Nevada lawmakers and state officials worried about the implications here.

The scoring method is flawed to begin with, “just an easy fix” for evaluating untested teachers, Bornfreund said. Most teachers will be scored on students not their own and subjects they never taught.

And that’s the opposite of what lawmakers intended. Their goal was to establish evaluations that show teachers their individual impact on students and where to improve their performance. If they don’t become more effective after professional development, the evaluations could be used to get rid of “in­effective” teachers.

But Small believes that even though it might be a flawed system, it’s a first step toward improvement by requiring principals to observe and collaborate with teachers instead of just running their pen over a checklist.

Nothing more than principal observations has been used in the Silver State. Teachers were rated unsatisfactory or satisfactory, with no in-between. More than 90 percent of Clark County teachers are rated “satisfactory,” according to officials. But Nevada ranks last or close to it in comparisons of student performance from state to state.

“There is a lot of trepidation” among teachers over using schoolwide scores for individual evaluations, Small said.

Good teachers will leave struggling schools because they will receive bad evaluations, and bad teachers will float on the success of their peers in good schools, many have predicted.

But there aren’t many alternatives without spending millions, Bornfreund said. The Hillsboro, Fla., school district created 900 tests to have one for every course and grade level. Florida is considering doing that statewide, as are North Carolina and Tennessee, she said.

“Do we really want schools to be testing factories?” said Small, noting that it will be a “total undertaking” to find a fair way of evaluating every teacher, but it can’t be rushed.

In an email to district officials and school board members, Augspurger laid out the policies and practices that must be changed to give principals power over their students’ success before they can be evaluated on it. Unlike now, where the district shuffles ineffective teachers among schools without principals’ consent, principals must have final approval, he said. And, most of all, the policy negotiated with the Clark County teachers union of laying off the least senior teachers first — regardless of how well they perform — must be abandoned, he said. The administrators contract already has done away with a last-hired, first-fired policy.

“A principal … should not lose a highly performing, first-year teacher and be required to keep a poorly performing teacher with more seniority,” he said. “We need to get serious here.”

It’s unlikely such a contract change would come willingly from the teachers union, requiring more reforms from the Legislature forcing it to be done.

State Sen. Debbie Smith, D-Sparks, has been an education reformist in the Legislature and was a key proponent for the evaluations in 2011. She said the recent legislation is just a start. Even the evaluations are coming slower than anticipated. The Legislature originally required full implementation this school year but decided a few months ago to pull back, as other states have done. Lawmakers gave the Nevada Department of Education up to two more years to test the system.

“It is better to slow down a bit than make mistakes,” she said.

Salazar agreed. “We are in uncharted waters.”