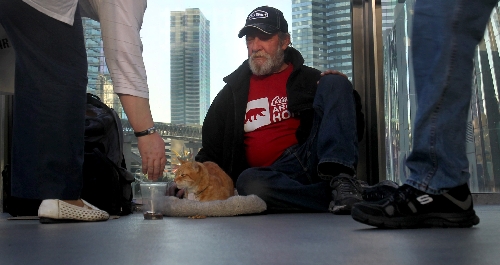 County commissioners on Tuesday referred a discussion about banning certain animals on Las Vegas Boulevard to a work group examining issues on the Strip.

The group, which is composed of tourist and gaming industry representatives and meets in secret, was formed by County Manager Don Burnette at the direction of commissioners last year to examine liquor sales, hand billing, street performers, vacant parcels, trash collection, graffiti, news racks and other persistent issues in the tourism corridor.

The goal is to "prevent further degrading of the brand," according to county management notes.

Commissioner Chris Giunchigliani, who sponsored the proposal, requested the matter be referred to the work group with plans to reintroduce an amended ordinance or provide suggestions at a later date. She said the proposal was meant to address animal cruelty issues and was prompted by tourist complaints brought to the Las Vegas Valley Humane Society.

There was not much discussion by county commissioners before they unanimously voted to let the Strip committee flesh out the proposal’s details and come back to the board later.

The action takes the discussion out of the public forum and into a secret meeting setting. The Strip committee does not post minutes or agendas and does not allow public attendance.

As it is written, the proposal would ban animals on public sidewalks and pedestrian bridges along Las Vegas Boulevard south of Sahara Avenue and north of Sunset Road and on either side for a quarter mile.

It would exempt service animals, nearby residents with pets going to and from their homes, animals used for government purposes and animals authorized by a parade permit, a special use permit, a business license or other government sanction. It also would exclude animals in pet-friendly hotels.

The proposal said that possessing animals on the Strip "tends to hinder traffic and promote loitering and unsanitary conditions."

Allen Lichtenstein, attorney for the American Civil Liberties Union of Nevada, told the Review-Journal earlier this month that the proposal faces constitutional challenges in that it’s "overbroad and unjustified" and does not address an exact problem.

Some who would be affected by the proposal should it become law criticized the amendment for unfairly targeting the homeless and buskers who panhandle on the Strip. Panhandling is constitutionally protected speech. Giunchigliani said the proposal had nothing to do with homelessness.

Others were critical of how the proposal would be enforced by animal control.

Terry Jicinski, senior vice president of operations for the Las Vegas Convention and Visitors Authority, sits on the Strip work group and told the Review-Journal in October that the committee is considering customer experience while examining issues.

"We want to make the Strip a pleasant place to walk," Jicinski said. "It’s about the simplicity of getting from point A to point B. Getting from one side of the Strip to the other. The endgame for the customer is the pleasure of that experience. Sensory is involved, how much litter is there? How clean is it? If there’s a smell? We want to make sure we’re not having any of that, that it’s well-maintaned, well-kempt and clean."

Commissioners Lawrence Weekly and Steve Sisolak requested the work group be created to conduct analysis of all issues, conduct fiscal analysis to determine whether a business improvement district or other similar mechanism could help resolve trash issues and bring stakeholders together to discuss design and signage issues.

It is unclear when the group will make a set of recommendations to the commission.