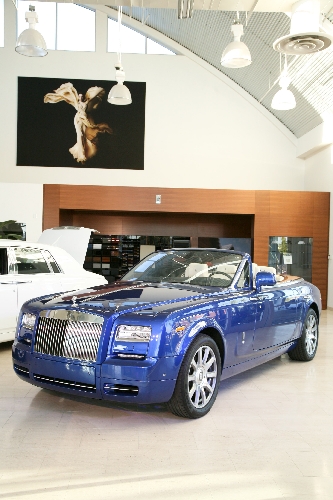 The local auto dealership industry is experiencing some expansion in this market, a good sign all around.

When economists look at developments within the overall business cycle, they pay attention to the automobile industry. Cars play an important role in forecasting the economic outlook, as the sometimes volatile industry makes a large contribution to other industries, according to industry analysts.

Locally, things are looking much better than the national picture, said Steve Olliges, president of Team Ford Lincoln, formerly Team Ford Las Vegas. Much of the local expansion in dealerships has to do with the national trends in consumer requested add-ons.

Technology has made new cars much more attractive to car buyers than in the past, making it a solid area for job growth in the Las Vegas Valley.

“The new technology has helped with us to continue to grow,” said Olliges, a longtime Las Vegan who is part of the professional driving team for the off-road Ford F-150 SVT Raptor truck.

A popular new technology includes rear-mounted radar for backing out of busy parking lots. The radar technology beeps an alarm when it has searched for and found approaching vehicles you may not be able to see. It will possibly include a visual indicator in the side mirrors in higher-end vehicles.

Night vision with pedestrian detection also will be a hot item in new vehicles as consumers ask for bigger and better safety options for their vehicles. Most new technology focuses on safety, while some are simply a matter of convenience for drivers.

Many of the latest technologies are being rolled out on higher-end vehicles, however it won’t take long for these extras to move into the mid- and lower-end automobile market as the car gadget industry continues to advance and demand grows across the economic board.

“The big changes we have noticed in our business is the technology in both cars and trucks,” Olliges said. “We now have park assist, sync and adaptable cruise control.”

Other technological advances to look for are the automatic high-beam control, parental control for teen drivers, GPS vehicle tracking, driver capability tools that can sense if a driver is impaired due to over-tiredness or other abnormal driving behaviors and in-car Internet using cellphone technology.

Olliges, a graduate of the University of Nevada, Las Vegas, is a passionate driver himself. A local resident since he was 6 years old, he has been riding in the desert for decades and has won the Baja 1000, along with seven championships. He was hand-picked by Ford officials when they came to Las Vegas to expand its four-point business plan more than a decade ago.

Team Ford’s success is built on customer satisfaction, Olliges said. Since opening Las Vegas Team Ford in 2000, Olliges and his management staff have always tried to hire people who have “exceptional people skills no matter what fields they were in previously, car business, golf pro, restaurant,” he said. “We look for reliable people with a great work ethic.”

In the spring of 2010, Team Ford expanded with its purchase of the Lincoln-Mercury dealership from the Desert Auto Group, something Olliges had been working toward. The Mercury brand was phased out in 2011, as Ford Motor Co. refocused its marketing and engineering efforts on the Ford and Lincoln brands.

“I had always wanted Lincoln-Mercury; it’s a Ford-owned product,” said Olliges. “We have more people coming in and more products, a huge service department, and we are hiring more sales people.”

The Team Ford group now has an even greater selection of vehicles and reaches a more diverse group of consumers across the valley and from the surrounding region.

Team Ford employs 120 people currently and is looking to hire about another 20, Olliges said.

A recent expansion has been to the service department. Team Ford’s Quick Lane of Las Vegas offers more than 14 different services, including brakes, minor and major tune-ups, electrical diagnoses and repair and oil changes, from experts trained at automobile factories. The staff can work on all makes and models using quality parts from brands such as Motorcraft, as well as name-brand tires from Goodyear, Continental, Michelin and more. Olliges is proud of the new, no-appointment necessary policy and late hours so costumers can drop off, pick up or work around their busy schedules rather than the other way around.

Quick Lane is located right across from the Team Ford dealership on Drexel Road in northwest Las Vegas.

“We look for someone who has great people skills, who is reliable and honest, and definitely someone who cares about doing the right thing,” Olliges said.

The company has had great success in particular because of its employees and their dedication to Team Ford’s goals, as well as the detailed training programs that the local dealership has implemented since opening.

“Anyone interested in seeking a job with us is asked to come on down to our human resources department and fill out an application,” Olliges said.

Towbin Motorcars, which opened in 1991, recently celebrated an expansion with the grand opening of its new showroom at 5550 W. Sahara Ave. Currently, the showroom has the Bentley Continental GT Speed, the fastest Bentley ever built, as well as the newly redesigned Rolls Royce Phantom family.

Recently, the company opened Towbin Fiat on 2550 S. Jones Blvd. and moved Towbin Motorcars (Rolls-Royce, Bentley and Aston Martin) to the West Sahara location and a fully redesigned new building. Towbin Automotive currently has a roster of more than 450 employees.

“This past year we have seen a bigger need to fill more positions because 2012 was the best year since 2007 for the automotive industry,” said Towbin-Mansour. “So with the increase in business we definitely need more employees.”

“We felt the same thing almost every industry felt because of the economic crisis,” Towbin-Mansour said. “It made us work harder and smarter which has ultimately made us a stronger, healthier company. We are always looking for new talent. We recently had a job fair and several hundred people came to interview.”

Towbin is always in the business of adding to its successful workforce. The longtime local company looks for potential employees who have a solid sales background and are customer-oriented with a strong work ethic. For those interested in applying, go to www.towbinmotorcars.com.

Berardi Towbin has been nominated for one of the most prestigious awards in the automotive industry. The matriarch of the Towbin business family is one of 57 dealers nominated for the 2013 Time Dealer of the Year award. She, along with the other nominees, will be honored at the 96th annual National Automobile Dealers Association Convention & Exposition in Orlando, Fla., Feb. 9.

“Taking over the helm of the company that my husband, Dan, and I built together, since his untimely death, has been most rewarding, though bittersweet,” Towbin said. “He was a visionary, a dedicated, hardworking, community-minded professional who taught me everything and pushed me beyond my comfort level as he did with our children, Josh (Chop), partner and general manager of Towbin Dodge, Prestige and Fiat, and Jesika, director of operations for Towbin.”

Three Square Food Bank, of which Berardi Towbin is a founding member, will benefit from the honor by receiving $1,000 from Ally Financial, a sponsor of the Time Dealer of the Year award.

Beradi Towbin has also chaired the Go Red for Women program from the American Heart Association and is a founding member of the Make-A-Wish Foundation’s Southern Nevada chapter. She was also on the board of Easter Seals and has received awards from the United Way and the Boys & Girls Clubs of Las Vegas for her efforts.

The company’s success, and subsequent return investment into the community, comes from its strong sense of loyalty to and from its employees, who play a major role in Towbin Motorcars’ charitable functions.

We look for “stable, loyal, hardworking and confident people who are looking for long term-employment within our automotive family,” Towbin-Mansour said. “We always promote from within the company. So once you join our team you can move up.”