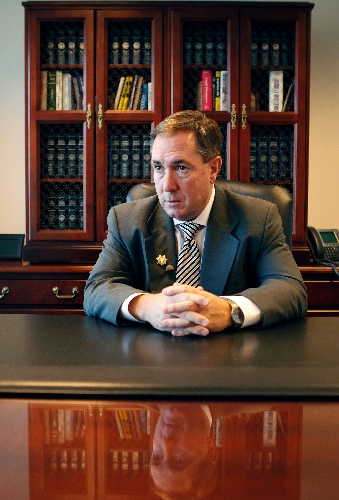 District Attorney David Roger said Tuesday he wants to be part of the legal staff of the Las Vegas police union but also is exploring employment opportunities with law firms.

"I’m confident I’ll be able to find some work," Roger said after making his Jan. 3 retirement official in an email to members of the Las Vegas news media. "It was a very tough decision to end a prosecutorial career, but at the end of the day, I have to think about my family."

In the email, he talked about his growing family with wife, Susan, a newly elected Las Vegas municipal judge.

"As you know, four days after my re-election, Susan and I were blessed with the birth of our daughter Holly Marie," Roger wrote. "This past year has been filled with many, many wonderful moments with our daughter.

"As a 50-year-old father, I am very cognizant of my own mortality and want to spend every minute of every day enjoying time with my family. I do not have any firm employment offers at the present time."

In an interview, Roger said working for the Las Vegas Police Protective Association, which represents 2,800 rank-and-file police officers, is appealing because the union’s office is two minutes away from his Summerlin home.

Chris Collins, the police union’s executive director, has publicly said he wants to hire Roger, but Collins must first get approval from his board of directors.

Allen Lichtenstein, general counsel for the American Civil Liberties Union of Nevada, said that until Roger resigns in January, the district attorney’s office should not investigate any matters involving police officers because of Roger’s possible employment with the police union.

"I think that it would be proper that his office recuse itself from anything having to do with investigations of police officers because at the very least that can create an appearance of a conflict of interest," Lichtenstein said.

Roger responded that he won’t remove his office from cases involving officers, but he intended to "screen" himself, or distance himself, from any involvement until he makes a decision on where he is going to work in January.

"We’re the chief law enforcement officers in Clark County," Roger said. "We screen people from cases all the time."

"I appreciate the opportunity the public has given me to serve them, but I have a family to think about," he said.

Roger, who reached a milestone Oct. 8 with his 25th anniversary as a county employee, gives up a base salary of more than $202,000 to enter the private sector.

At Tuesday’s commission meeting, county counsel Mary-Anne Miller said the seven commissioners, all of whom are Democrats, do not have to appoint someone from Roger’s political party. Roger is a Republican.

Wolfson, 57, who began his legal career as a prosecutor in the district attorney’s office, said a lot of people have "encouraged him" to seek the top job.

"If anything, it gives me an advantage having served on both sides," said Wolfson, who also spent a couple of years as a federal prosecutor.

Lowry, who has been with the district attorney’s office for two decades, said Tuesday she also is interested in the position.

If chosen, Lowry, 51, would be the first woman to serve as district attorney.

"I’m not sure there is anybody who has the breadth of experience within our office or outside of our office that has worked in so many different roles and places in the office," Lowry said.

She oversees the family support, juvenile delinquency and child welfare divisions of the district attorney’s office and manages 300 people on a $33 million budget.

Other candidates are likely to surface as the selection process picks up.

Commissioner Chris Giunchigliani Tuesday called for the creation of a selection committee to interview candidates. The committee would be made up of people selected by each commissioner, and the process would be open to the public.

"I believe this is a wonderful opportunity to have a fair, impartial administrator in the position of the district attorney," she said in an email to the Review-Journal.

Giunchigliani, who has been at odds with Roger over his ardent support of the death penalty, said it’s a difficult job that "requires treating employees with respect, assuring independence of judgment with regard to law enforcement, prosecuting criminals appropriately and watching how our public tax dollars are spent.

"We have had DA’s such as Bob Miller, Stew Bell (and) Rex Bell that could be role models for being a district attorney."

Roger has sometimes tangled with the commission, especially over budget cuts, during his decade-long tenure. In April, he refused to follow a county-wide edict to cut his payroll by 9 percent, saying the order crippled his ability to carry out the duties of his office.

County Public Defender Phil Kohn, who has a history of sparring with Roger, took some parting shots at the district attorney on Tuesday.

Kohn said his office has been unable to work with Roger on death penalty cases "to sort through which cases should be filed and not be filed."

The death penalty should be used in the worst-of-the-worst murder cases, Kohn said.

"I’m hoping in Mr. Roger’s successor, that it is someone we can work with," Kohn said. "I have no communication with David Roger."