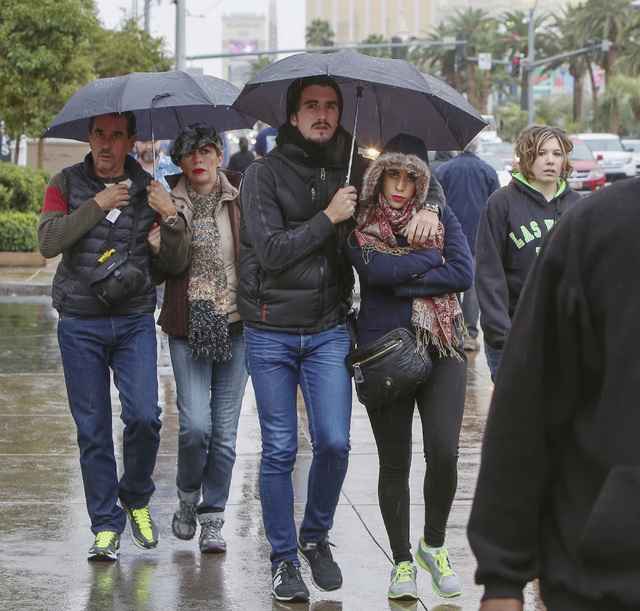 Pedestrians holding umbrellas walk on the side walk along Las Vegas Boulvard near Aria Hotel and Casino as heavy rain approaches the Las Vegas Valley on Friday, Dec. 12, 2014. A weather system that is bringing heavy rainfall to Northern California and southern parts of Oregon is going to drop some moisture on the Las Vegas Valley before the weekend (Bizuayehu Tesfaye/Las Vegas Review-Journal)

It was a wet Independence Day for many in the Las Vegas Valley, and the monsoon weather is expected to last through the weekend, according the the National Weather Service.

According to meteorologist Chris Outler from the weather service’s Las Vegas office, the measuring station at McCarran International Airport recorded .08 inches of rain on Friday and officially broke the 125-day dry spell.

Though the valley was 25 days short of the 150-day record for most days without measurable precipitation, this last spell was the 11th driest in Las Vegas history.

On Saturday, the valley felt a lot of moisture in the air, and clouds brought the temperature down slightly to about 98 degrees, but most of the rain fell north of the valley in Lincoln, Mojave and Nye counties.

Thunderstorms were developing west of the valley early Saturday afternoon, Outler said, and rain was already falling in the Spring Mountains and in San Bernardino County, Calif.

Mount Charleston got over an inch of rain, and hail covered the ground at the Las Vegas Ski & Snowboard Resort.

The wind wasn’t too extreme, though there were gusts around the storm cells, and Pahrump felt winds reaching 40-50 mph.

There’s a 20 percent chance of a repeat performance of Friday night’s precipitation, and the monsoon moisture will stick around throughout the weekend and maybe into next week, he said.

Flash flood warnings were issued for Twentynine Palms and Needles, Calif., and, closer to home, the south side of the burn area from last year’s Carpenter 1 wildfire was expected to see some flash flooding. U.S. Highway 95 had some flooding south of Beatty.

Flash floods happen when showers dump rain onto Southern Nevada’s dry ground and roadways, which can’t absorb it. Flash floods are dangerous because they happen suddenly, and the floodwater generally runs fast.

The Regional Flood Control District recommends drivers avoid flash floods. It only takes 12 inches of water to wash your car, truck or SUV off the road, the agency said.

You can track flash floods using the Twitter hashtag #NVfloodspotting, and you can download the flood control district’s FloodSpot smartphone app for iPhone and Android devices.