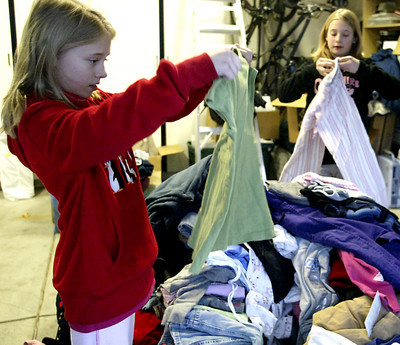 A few weeks after donating her life savings of about $20 to a family she had never met, 9-year-old Taylor Sturgis is learning what it is like to be on the receiving end of the holiday spirit.

Taylor had been planning on buying a new leotard and maybe something nice for her family with her savings until she heard on the radio that a thief at a memorial service stole thousands of dollars collected for the widow and child of an iron worker who had fallen to his death at a construction site.

Taylor insisted that her mother, Ali Sturgis, drive to the other side of town to give the grieving family Taylor’s savings. “So I did,” Ali Sturgis said. “And now I keep telling her that this is why everyone is being so nice to us.”

Her family’s Henderson home burned down last week and since then her cell phone hasn’t stopped ringing with people wanting to help.

“It makes me happy that everyone is giving back to us,” said Taylor, a Kesterson Elementary School fourth-grader.

About 1:40 a.m. Thursday, the Sturgis family was forced out into the cold and dark pre-dawn by a blaze that destroyed the downstairs kitchen, living and dining rooms at their Christmas-lighted home on Freedom Court, southwest of Warm Springs Road and Arroyo Grande Boulevard.

Over the weekend, during one of many trips to the house to try to salvage whatever he could, Tom Sturgis pointed to a crumbling wall beneath a caving ceiling on Saturday. “That’s where the (Christmas) tree was,” he said.

“I’m just happy we all got out, that’s the main thing,” he added.

“After the fire alarms went off,” Ali Sturgis said, “I looked back and, just seeing all those flames in my kitchen, I thought, ‘Oh my God.’

“I was pushing the kids out, no socks, no shoes, just pajamas and I was thinking to myself, ‘This is my picket fence that’s going down. This is our dream.'”

But two days later, her attitude had changed to one akin to her husband’s. “Things can be replaced. It’s just stuff,” she said. “I’m just so glad everyone is okay.”

Her sister took the family into her Henderson home. And Christmas will go on, complete with presents. Henderson firefighters went into the house Thursday morning and pulled out as many presents as they could.

“It’s pretty cool they did that,” said Kimberly Sturgis, 11, a sixth-grader at Greenspun Middle School.

As for replacing their household possessions, Ali Sturgis’ employer at Gymcats, a Henderson gymnastics facility for children, sent an S.O.S. e-mail to its staff and clients, even listing the clothing sizes for each of the four family members.

Donations have been pouring in so fast that “we’re going to have to start giving things away soon,” Tom Sturgis said.

By Sunday, the garage at Taylor’s aunt’s home was filled with bags of clothes that the family was going through to see what fit best.

“It’s just been tremendous, overwhelming really,” Ali Sturgis said. “I just keep saying thank you, but that seems so inept.”