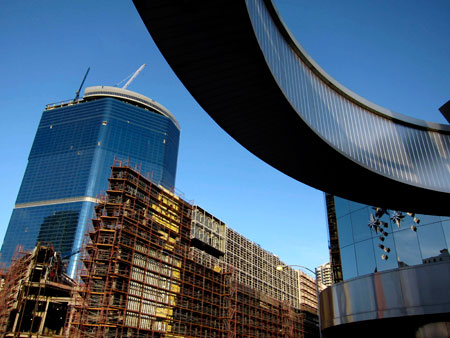 Billionaire corporate raider Carl Icahn said Wednesday he would wait for the Las Vegas gaming market to settle before deciding how to proceed with the bankrupt Fontainebleau development that has been shuttered since April.

Icahn, the former owner of the Stratosphere and Arizona Charlie’s properties, submitted the only qualified bid for the shuttered Fontainebleau, according to a report filed late Tuesday by the examiner for the U.S. Bankruptcy Court in Miami.

Examiner Jeffrey Truitt said an auction for the Fontainebleau, scheduled for Thursday, wouldn’t take place. The bankruptcy judge has set a hearing on the Fontainebleau for Jan. 27 and Icahn could be awarded ownership of the 27-acre Strip development at that time.

Icahn’s bid of $156.6 million for the Fontainebleau was submitted in late November.

Reached at his New York City offices, Icahn said his staff did “a fair amount of work” accessing the planned 3,889-room Fontainebleau, which sits unfinished at the northern end of the Strip.

The project was 70 percent complete when construction was halted after lenders cut off $800 million in financing. The Fontainebleau once had a construction budget of almost $3 billion.

“It’s pretty stormy in Vegas right now,” Icahn said, talking about the current economic climate and not the weather. “We’ve always liked Vegas, but it’s probably overbuilt a bit too much. But that doesn’t mean it will be overbuilt forever. We have hope the sun will come out again.”

Icahn said he would leave it up to the bankruptcy court to decide when he could take control of the Fontainebleau. “We’ve always been the people who buy the things nobody else wants,” Icahn said. “I like the business. I think gaming is a pretty good business.”

Analysts have said it would take at least $1.5 billion to complete the Fontainebleau.

In a one-page letter, Truitt said two other submissions were filed by last Friday’s deadline to bid on the Fontainebleau. However, he said those bids didn’t meet certain qualifications.

Truitt didn’t name the bidders, but neither submission was accompanied by a required deposit or satisfactory evidence that the bidder had the financial ability to close the transaction, according to his letter.

Truitt declined comment Wednesday beyond what he submitted to the bankruptcy court.

One bid was thought to have come from San Francisco real estate developer Luke Brugnara, who said he was willing to pay up to $200 million for the Fontainebleau. Brugnara was denied a Nevada gaming license by state casino regulators in 2001.

Brugnara said he submitted a bid of $170 million with the court Friday, with the financial backing of a New York City hedge fund.

In November Icahn outbid Penn National Gaming to become the bankruptcy court’s stalking horse bidder for the Fontainebleau. Penn National said last week it was no longer interested in the project.

The bankruptcy judge in Miami will have to rule on when Icahn can take ownership of the Fontainebleau.

Icahn, 73, is currently ranked 43rd on the Forbes list of the world’s wealthiest people with a net worth of $9 billion.

Icahn realized a $1 billion profit when he exited the Las Vegas casino market in early 2008, selling the Stratosphere, both Arizona Charlie’s and the Aquarius in Laughlin to a private equity firm for $1.3 billion.

Icahn recently re-entered the casino industry as the largest single equity holder in the restructured Tropicana Entertainment, which is expected to exit bankruptcy by the end of the month.

His company now owns eight casinos, mostly riverboats in the Midwest as well as two properties in Laughlin and one in Lake Tahoe.

He also led a group of investors in March that acquired the Tropicana Atlantic City for $200 million at auction. The property will be part of Tropicana Entertainment, which has its corporate headquarters in Las Vegas.

Icahn said Wednesday that he would keep Tropicana Entertainment and the Fontainebleau separate, but that could change.

Before it went into bankruptcy, the Fontainebleau had been scheduled to open late this year.
Contact reporter Howard Stutz at hstutz@reviewjournal.com or 702-477-3871.