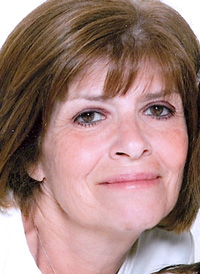 JANE KALINOWSKY/REVIEW-JOURNAL Kathleen Turner, left, poses in a portrait. Turner got hit with a ball during a 51's game......

CARSON CITY — Always keep your eye on the ball has taken on new meaning in Nevada.

In a 4-3 decision, the court said stadium operators have protections from lawsuits involving foul balls striking fans, even if an injury occurs outside of the stands.

In adopting the "baseball rule" for an entire stadium, the court majority dealt a death blow to a lawsuit filed by Las Vegas 51s fan Kathleen Turner, who was eating a sandwich in the Beer Garden at Cashman Field in 2002 when a foul ball struck her between the eyes, breaking her nose and cutting her face.

The court majority said a stadium operator has a limited duty to protect spectators against injuries caused by foul balls that are errantly projected into the stands.

But the court said the operator in the case at hand, Mandalay Sports Entertainment, which operates the stadium where the Las Vegas 51s play baseball, "satisfied its duty as a matter of law under the facts presented in this case."

The court minority argued that the "baseball rule" protecting stadium operators from liability for foul balls should apply only to the stands, where spectators are more attuned to the potential for an injury from a foul ball.

Attorney Beau Sterling, representing Turner, said the majority extended the protection to an entire stadium, which had the effect of upholding a lower court ruling that threw out Turner’s case in 2005.

"It’s a close decision, and it provides some comfort," Sterling said. "But it’s also a bit more painful. It’s all about counting to four in Nevada."

Sterling had asked the court to adopt a more limited rule, giving juries the opportunity to determine if a foul ball injury that occurs outside the stands should result in compensation for the injured party.

Turner was sitting in an area where there are seats with a limited visibility of the game.

Sterling said the court majority has now equated sitting in such an area to sitting behind home plate.

"We thought it should be a question for a jury to decide," Sterling said.

Attorney Thomas Dillard Jr., who represents Mandalay, could not be reached for comment on the decision.

But in October oral arguments in Las Vegas on the case, Dillard described Turner as an experienced baseball spectator who should have known to pay attention to the game at all times. Dillard also noted that 51s tickets carry a warning about the risk of foul balls.

The majority decision was written by Justice Ron Parraguirre, who was joined by Justices Bill Maupin, Jim Hardesty and Nancy Saitta.

In adopting the "limited duty," or baseball, rule, Parraguirre said a stadium operator’s obligations to safeguard baseball fans is satisfied by sufficient protected seating for those spectators who reasonably might be anticipated to desire protected seats, and when protection is also provided for spectators in the most dangerous parts of the stadium, such as behind home plate.

The record in the case establishes that foul balls occasionally fly into the Beer Garden, some parts of which have an obstructed view of the field, he noted.

Gibbons supported the adoption of the limited duty rule but only to the stands.

"Because the limited duty rule should not apply outside of the stands, I conclude that the 51s had a general duty to protect Mrs. Turner from injury in the Beer Garden," Gibbons wrote. "Whether the 51s breached that duty by failing to provide a protective screen or barrier is a question of fact for the jury."