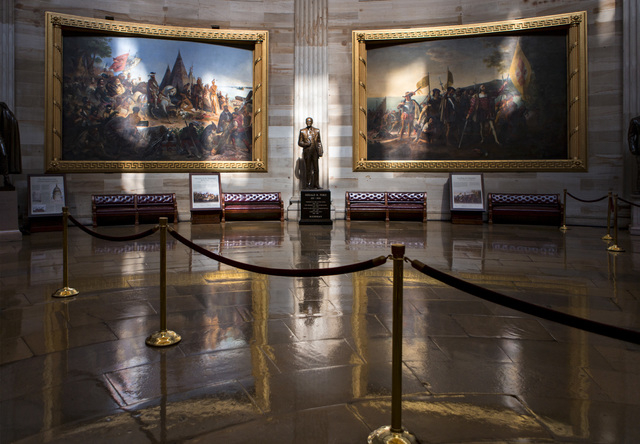 Normally filled with visitors and tourists, the empty Rotunda at the U.S. Capitol is seen in Washington, Tuesday, Oct. 1, 2013, after officials suspended all organized tours of the Capitol and the Capitol Visitors Center as part of the government shutdown. A statue of President Gerald R. Ford at center is illuminated amid large paintings illustrating the history of the United States. (AP Photo/J. Scott Applewhite)

WASHINGTON — There’s at least one constant in a government shutdown: The 532 members of Congress continue to be paid — at a cost of $10,583.85 per hour to taxpayers.

Lawmakers get their pay even as hundreds of congressional staffers are sent home, packs of tourists are turned away at the Capitol, and constituent services in many offices grind to a halt. Most entrances to House and Senate office buildings and underground parking garages are closed.

House members and senators can’t withhold their own pay even if they want to. Under the Constitution’s 27th Amendment, lawmakers can only change the pay of those in a future Congress, not the one in which they serve. Senators and House members are paid $174,000 a year; a handful of leaders make up to $20,000 more.

Lawmakers aren’t oblivious to how it looks. Republican Sen. Ted Cruz and others are pledging to donate their salaries to charity during the shutdown.

While lawmakers’ paychecks will continue, the same isn’t true for their aides and some support staff at the Capitol. Like some 800,000 other federal employees judged to be nonessential and therefore furloughed, thousands of workers on Capitol Hill were sent home Tuesday. Those who weren’t will still see their paychecks delayed.

Sen. Saxby Chambliss, R-Ga., told all but four of the 30 staffers in his Washington office they were not needed during the shutdown. People quit answering his office phones at noon, replaced by a recorded message normally used for greeting after-hours callers. “They’ll get to hear my message,” Chambliss quipped.

Assistant Senate Democratic leader Dick Durbin sent about 80 percent of his Washington staff home and closed all four of his offices in Illinois. Other lawmakers determined a bigger share of their aides was too important to be furloughed.

Rep. Peter King, R-N.Y., said he’d told just four staffers — all part-timers — to go home. House Majority Leader Eric Cantor, R-Va., sent about a third of his staff home, though his office did not say how many aides that meant overall. The offices of House Speaker John Boehner and Senate Majority Leader Harry Reid didn’t immediately respond to queries about how many staffers were furloughed and how many were still at work.

The Capitol was eerily quiet for a weekday when Congress is in session. Doors to the House and Senate barber shops were locked as were most of the restaurants and snack facilities in the Capitol and neighboring congressional office buildings. All the gift shops were closed.

The only tourists in the Rotunda, the old House and Senate chambers and other locations for gawking were tiny groups escorted by lawmakers themselves. The red-jacket escorts who normally direct thousands of tourists through the Capitol every day were judged to be nonessential, as were most of the security aides who check them through metal detectors.

As long as the House and Senate remain in session, the visitors galleries for watching lawmakers in action are open, too. Unlike when the government isn’t shut down, there weren’t any lines of people waiting to get in Tuesday.