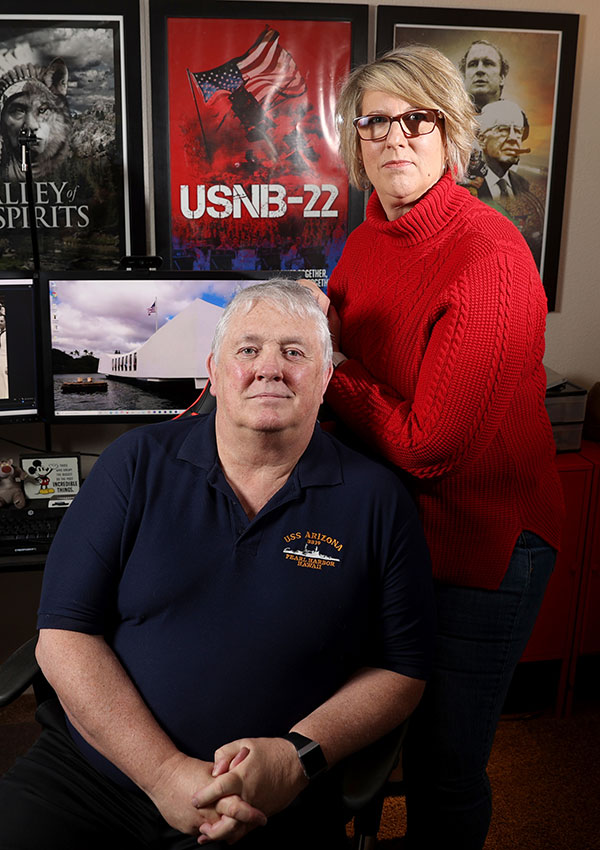 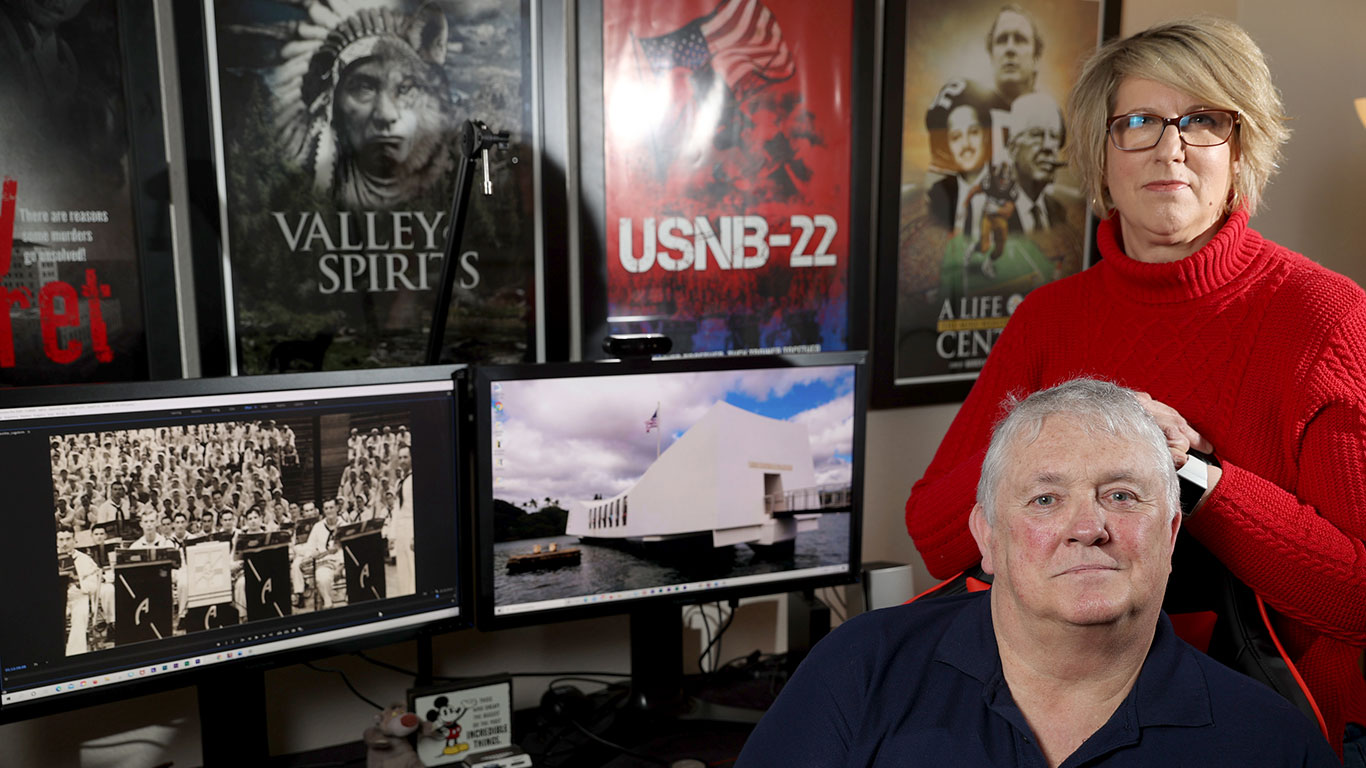 ‘They were
right there’
Las Vegas filmmakers’ documentary tells lesser-known story of Pearl Harbor attack
Filmmakers Warren and Annette Hull at the editing studio in their Las Vegas home Monday, Nov. 23, 2020. They are releasing a new documentary, "A Band to Honor," on Dec. 7, the anniversary of Pearl Harbor. This film is about the USS Arizona Band, all of whom died during the attack. (K.M. Cannon/Las Vegas Review-Journal) @KMCannonPhoto
By John Przybys / Las Vegas Review-Journal
December 6, 2020 - 12:14 am 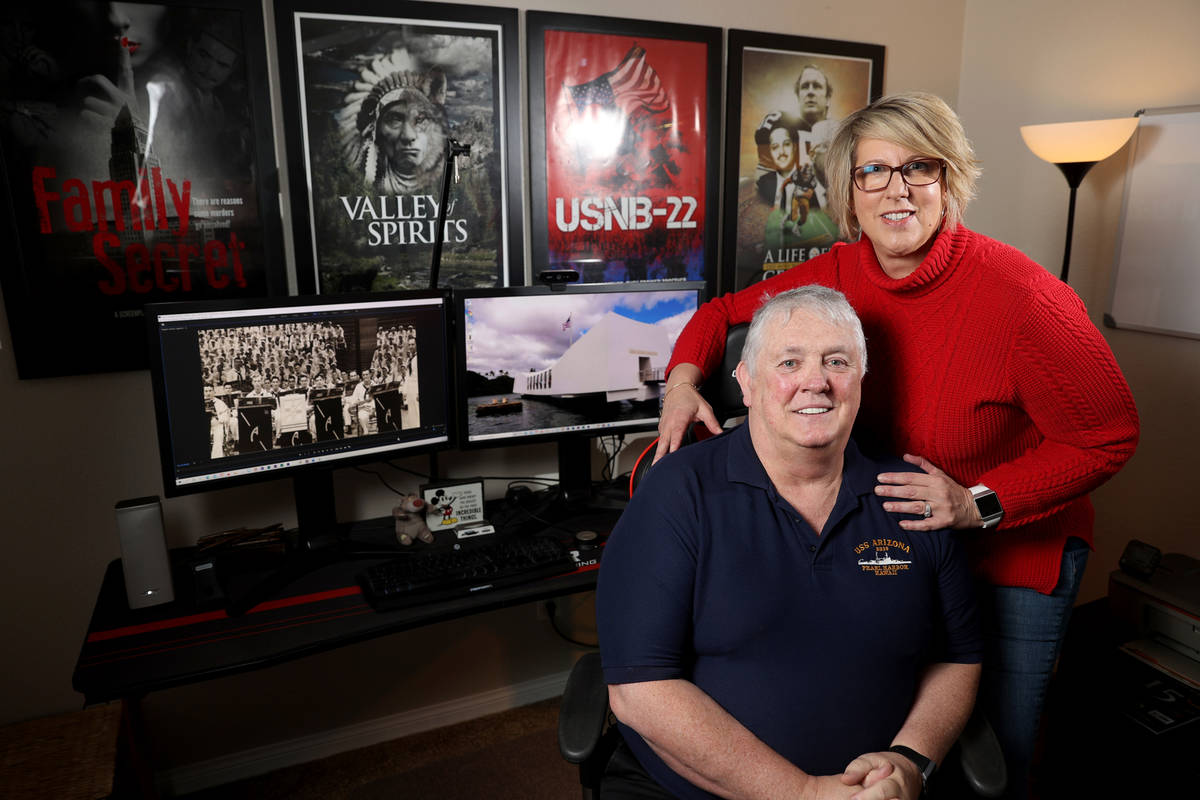 In "A Band to Honor," Warren and Annette Hull tell the story of the U.S.S. Arizona Band, whose members were killed in the attack on Pearl Harbor on Dec. 7, 1941. (K.M. Cannon/Las Vegas Review-Journal) @KMCannonPhoto 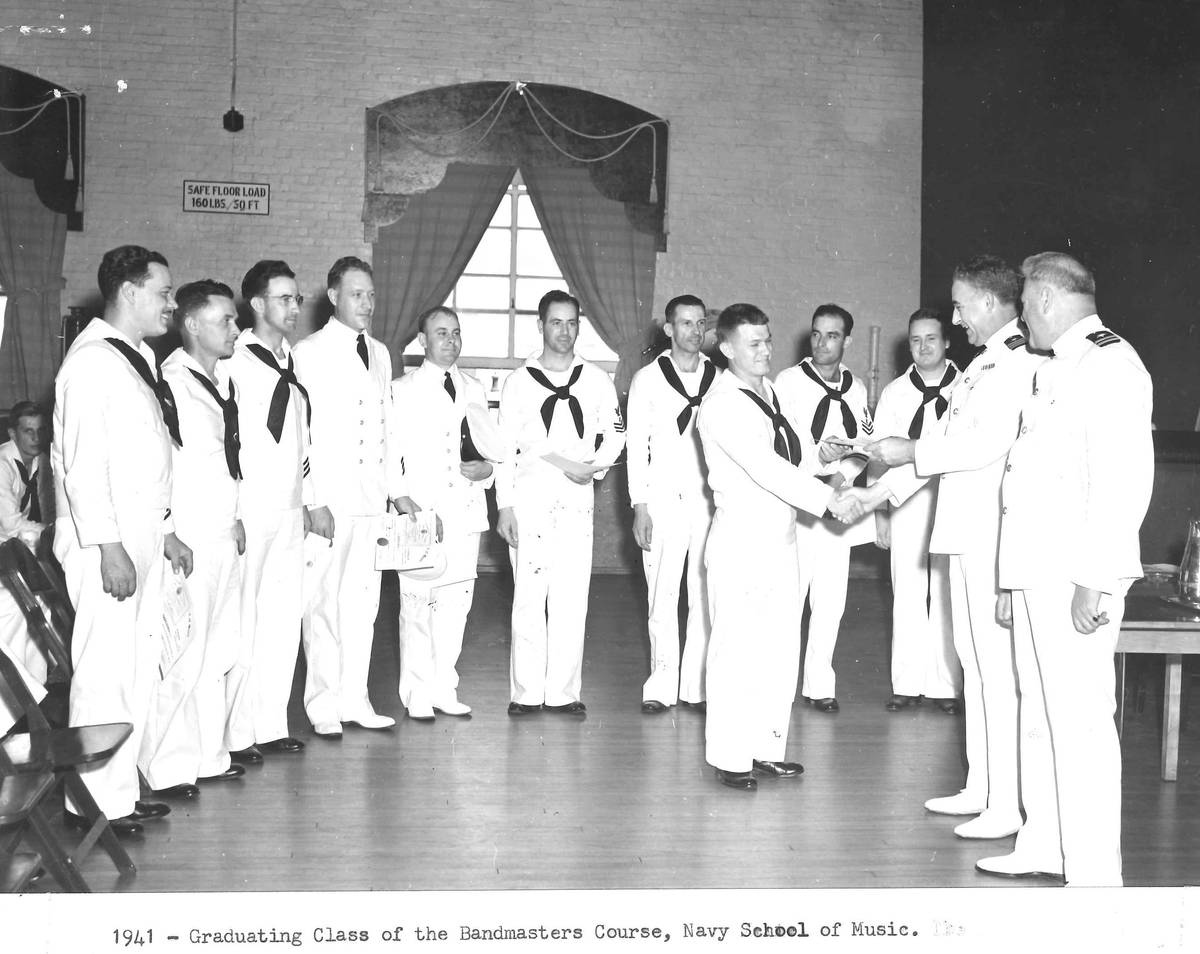 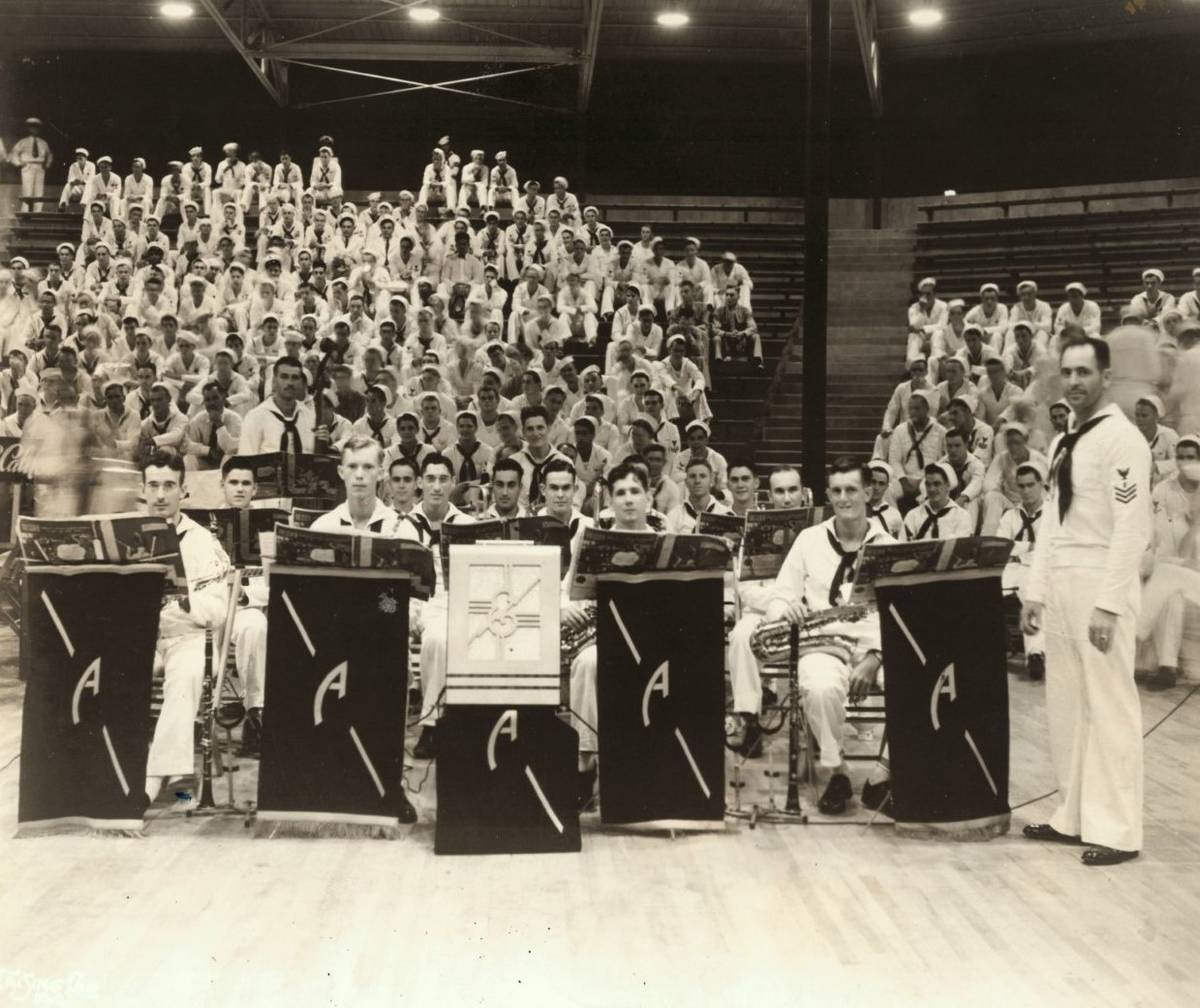 The U.S.S. Arizona Band plays in a Battle of Music competition in Hawaii during the fall of 1941. It would be their last group photo. (U.S. Navy) 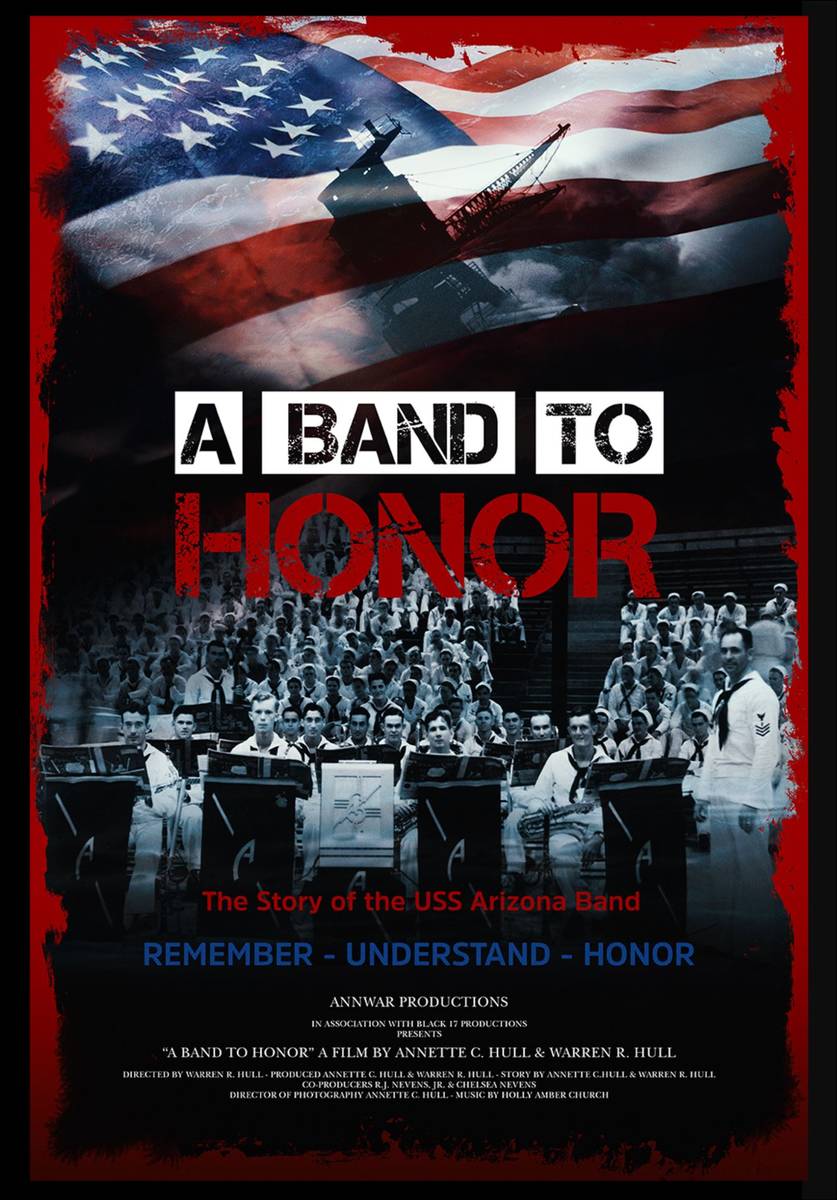 The poster for "A Band to Honor," a documentary about the U.S.S. Arizona Band. (AnnWar Productions) 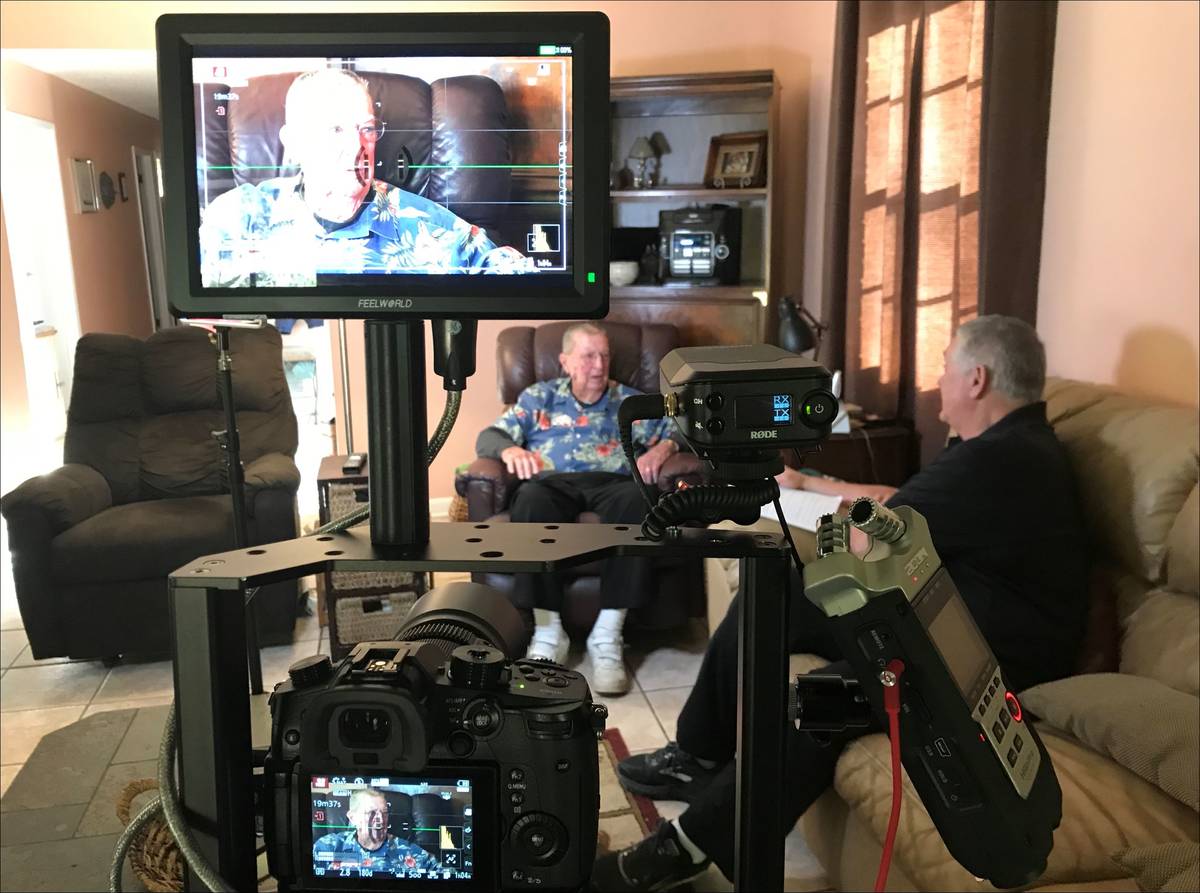 Annette and Warren Hull interview Frank Emond, a Pearl Harbor veteran who was a member of the U.S.S. Pennsylvania Band. Emond's remembrances of the attack on Pearl Harbor is included in "A Band to Honor," the Hulls' documentary about the U.S.S. Arizona Band. (AnnWar Productions) 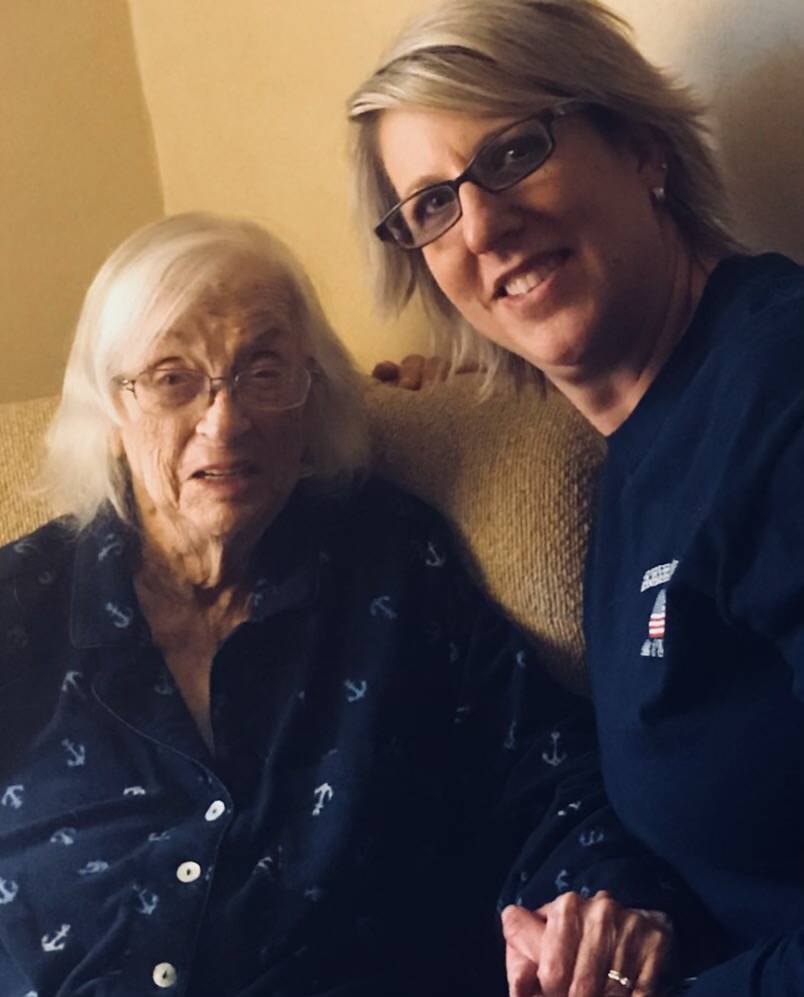 Annette Hull is pictured with Molly Kent, one of the sources Hull and her husband, Warren, interviewed for their documentary, "A Band to Honor." Kent's brother, Clyde, was a member of the U.S.S. Arizona Band.(AnnWar Productions)

They were 21 men — kids, really, most of them in their late teens and early 20s — who served their country by wielding musical instruments as well as weapons. And when the attack on Pearl Harbor came on the morning of Dec. 7, 1941, they died together, along with more than 2,400 others.

Annette and Warren Hull have spent three years producing a documentary about the men, who were members of the USS Arizona Band. But when they tell others about their film, the usual response isn’t about the Arizona and its fate, or even about the band and what it did.

Mostly, Warren Hull says, it’s just surprise that a battleship would have a band.

It’s an aspect of Pearl Harbor — an attack that brought the United States into World War II — that most people don’t know about, he says, which made it both compelling and a perfect subject for the Las Vegas-based filmmakers’ first feature, “A Band to Honor.”

On Monday, the film can be seen on the Eventive virtual cinema platform for 48 hours starting at 9:48 a.m. Pacific time. Annette Hull said the film is the product of a visit to Hawaii in 2005, when she and her husband were high school educators in Kennewick, Washington, escorting the school’s band to a Waikiki holiday parade.

“On that trip we had 130 kids, and we took all of them to the USS Arizona Memorial,” she said. There, they learned about Navy Band Unit 22, made up of 21 musicians who had trained together at the U.S. Navy’s school of music, went to Hawaii together to serve on the USS Arizona and, on Dec. 7, 1941, died together among the ship’s 1,177 casualties.

By 2017, Warren and Annette had started their own production company and began working on a 25-minute short feature. But after their first few interviews, the short grew into a feature-length documentary, mostly because sources were excited about “telling this story nobody has done before,” Warren said.

“Most people, when we tell them we’re doing a documentary on the Arizona band, they’re like, one, ‘I didn’t know they had a band’ and, two, didn’t know they were actual professional musicians,” Annette said. “They went to the (Navy) school of music back in D.C. for four or five months, then formed a unit and were taken (onto the Arizona) as a unit.” 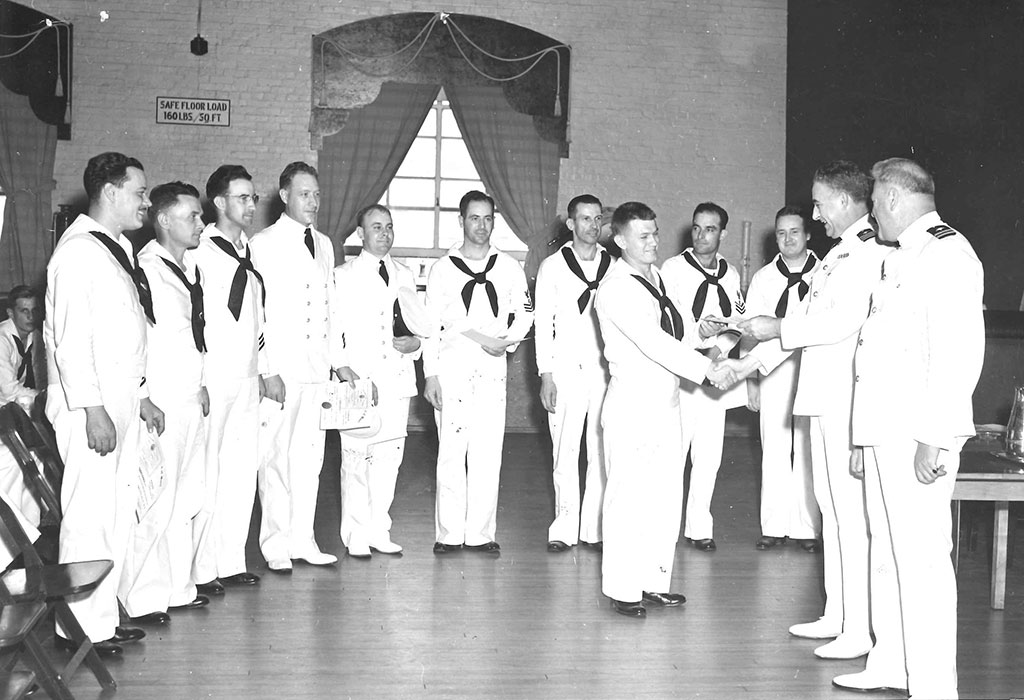 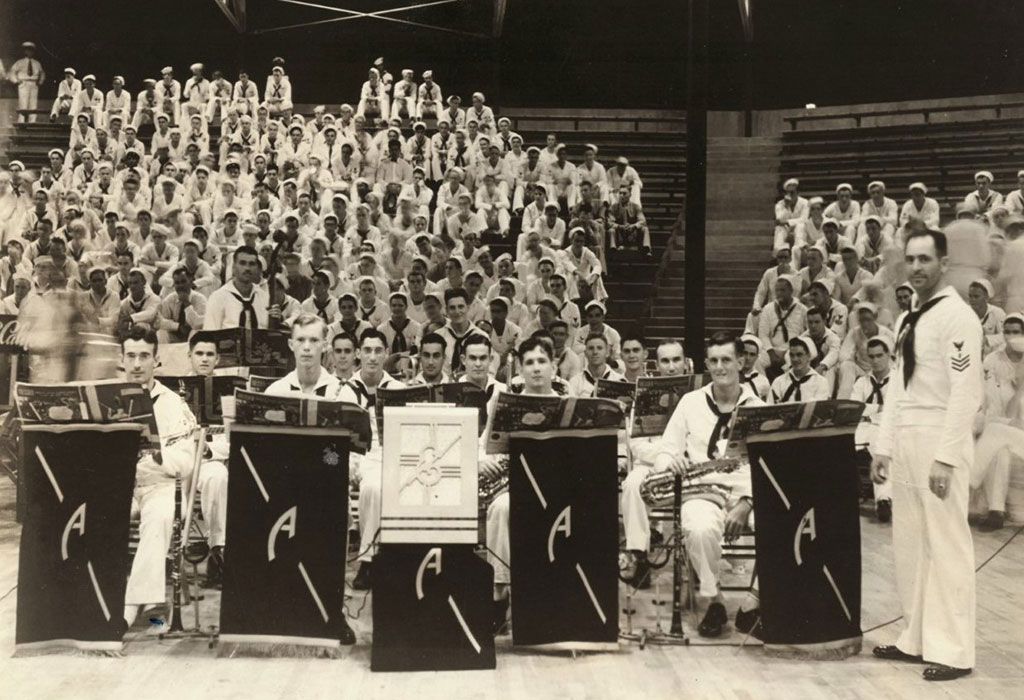 The U.S.S. Arizona band plays in a Battle of Music competition at Bloch Arena in Hawaii during the fall of 1941. It would be their last group photo. (U.S. Navy)

Most people, when we tell them we’re doing a documentary on the Arizona band, they’re like, one, ‘I didn’t know they had a band’ and, two, didn’t know they were actual professional musicians.

Ships’ bands were charged with providing music for ceremonial functions and everyday ship routines and played to entertain shipmates, Warren said. “They used to have a band on every battleship, even some smaller ships.”

The Hulls filmed experts who include the chief historian of Pearl Harbor and the sister of an Arizona band member. They also interviewed five Pearl Harbor survivors, two of whom have since died.

The story will be new for some viewers. For others, it will offer a chance to correct nuggets of misinformation passed down through the decades. For example, it’s a widespread misconception that, having performed the previous evening, “they were given Sunday off, and they all died in their sleep,” Warren said. “Absolutely not. That’s not even close to being true.”

Actually, the band watched other bands perform in a competition the night before. Then they played morning colors, Annette said, and when the Japanese attack began, they ran to their assigned battle stations, where they died.

“The other thing people don’t realize is they weren’t (only) band members,” Warren said. “They had duties aboard the ship, and their duty station was powder handling” — working with gunpowder for the ship’s big guns. “They were in the mix,” he said, “as a bomb penetrated four decks down to where they were working.”

“That’s where the Arizona exploded. They were right there.”

It was just an emotional, wonderful journey for me. My grandpa passed away two years ago. He was 95. It definitely felt like a way to honor him.

One veteran, Frank Emond, was almost 100 when the couple interviewed him. He also had attended the Navy music school and played French horn in the USS Pennsylvania band, Warren said, and “the joy in his heart was so strong when he was talking about the band.”

As Emond spoke about the morning of Dec. 7, Annette said, “there was a change in his eyes and his body and his soul. We knew he was back in that moment because everything changed. We had to stop filming because we were both so choked up.”

The documentary features animation that, Warren said, “describes the attack in a new way.” It also features original music by Holly Amber Church, a 1996 Green Valley High School graduate, who is a successful composer in Hollywood. Her music, Annette said, is “the heart and soul of the film.”

It was a personal project for Church, too, whose grandfather served in the Navy during World War II. Church has written music for dramas, documentaries and action and sci-fi films, “but I typically do a lot of horror,” she said, making this project “definitely a departure.”

“It was just an emotional, wonderful journey for me. My grandpa passed away two years ago. He was 95. It definitely felt like a way to honor him.”

“A Band to Honor” (abandtohonor.com) is the Hulls’ first feature. Both have day jobs — he as executive assistant to the Clark County School District chief of police, she as director of the Las Vegas International Film &Screenwriting Festival, which they own. The film was financed, Warren said, “with our Visa and Mastercards.”

But, for both, it’s a project that needed to be done.

“When I wrote this script, it was kind of a calling,” Warren said.

“We knew we had to do this,” Annette said.