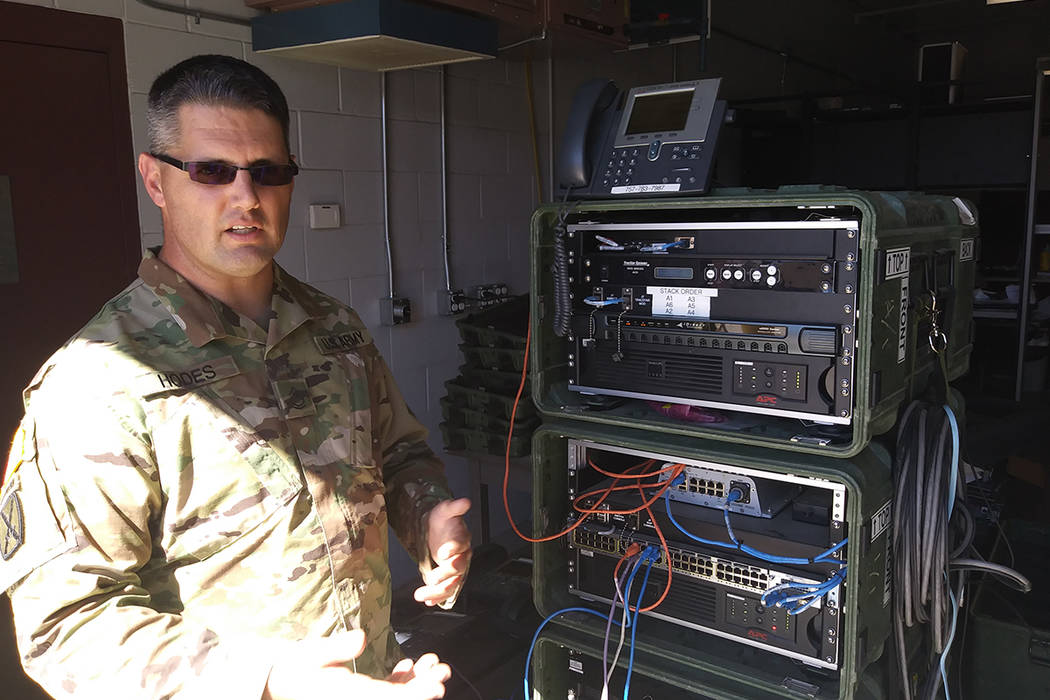 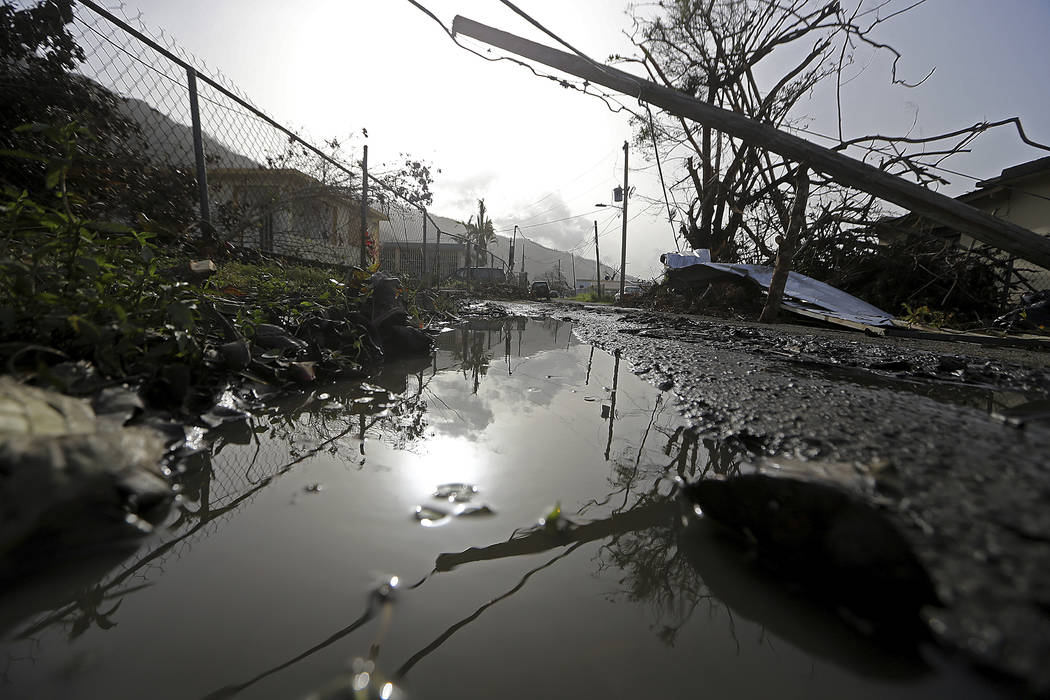 Downed power lines and debris are seen in the aftermath of Hurricane Maria in Yabucoa, Puerto Rico, Tuesday, Sept. 26, 2017. Gov. Ricardo Rossello and Resident Commissioner Jennifer Gonzalez, the island’s representative in Congress, have said they intend to seek more than a billion in federal assistance. (Gerald Herbert/AP) 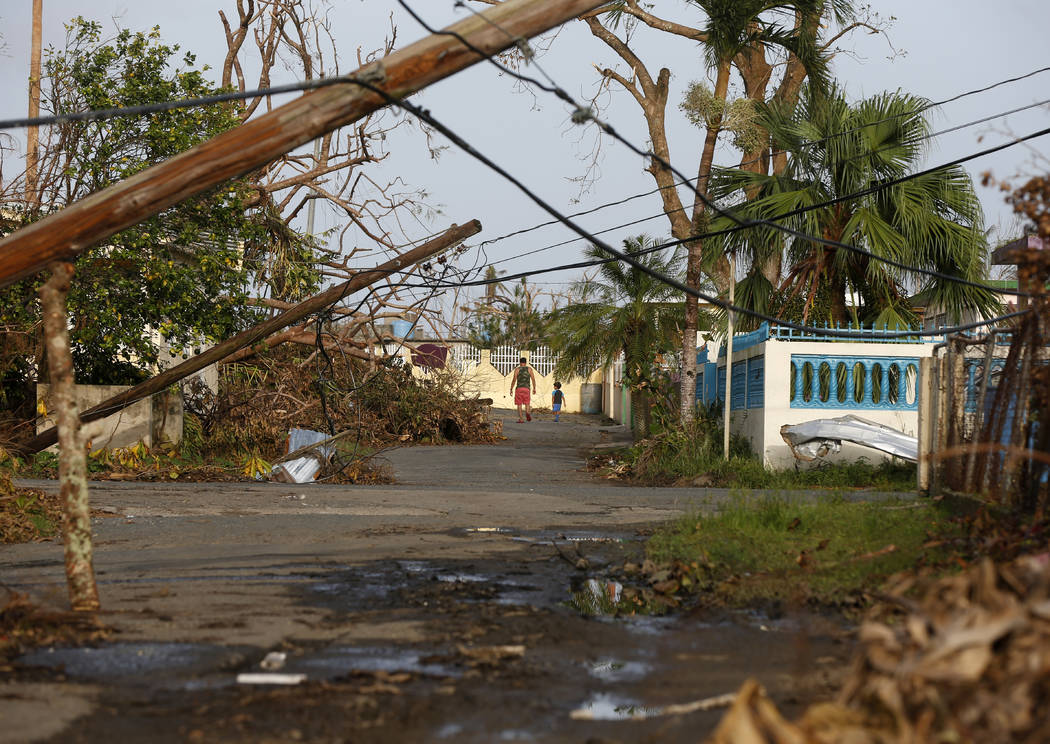 A man and child walk down street strewn with debris and downed power lines in the aftermath of Hurricane Maria, in Yabucoa, Puerto Rico, Tuesday, Sept. 26, 2017. (Gerald Herbert/AP) 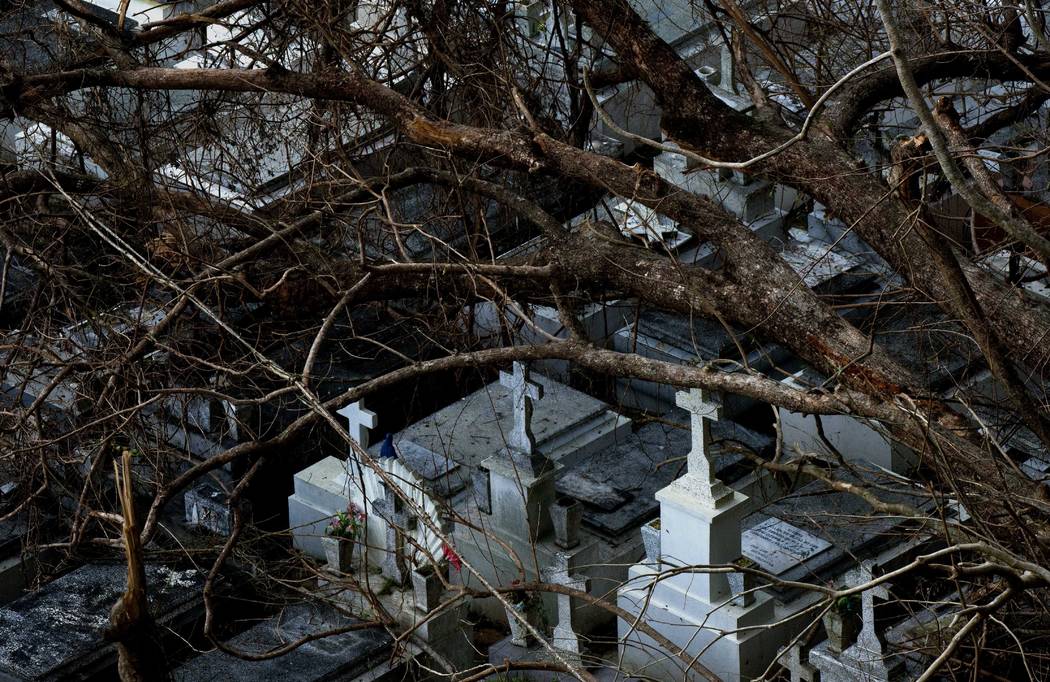 Downed trees rest on tombs at the cemetery of Lares after the passing of Hurricane Maria, in Puerto Rico, Tuesday, Sept. 26, 2017. (Ramon Espinosa/AP) 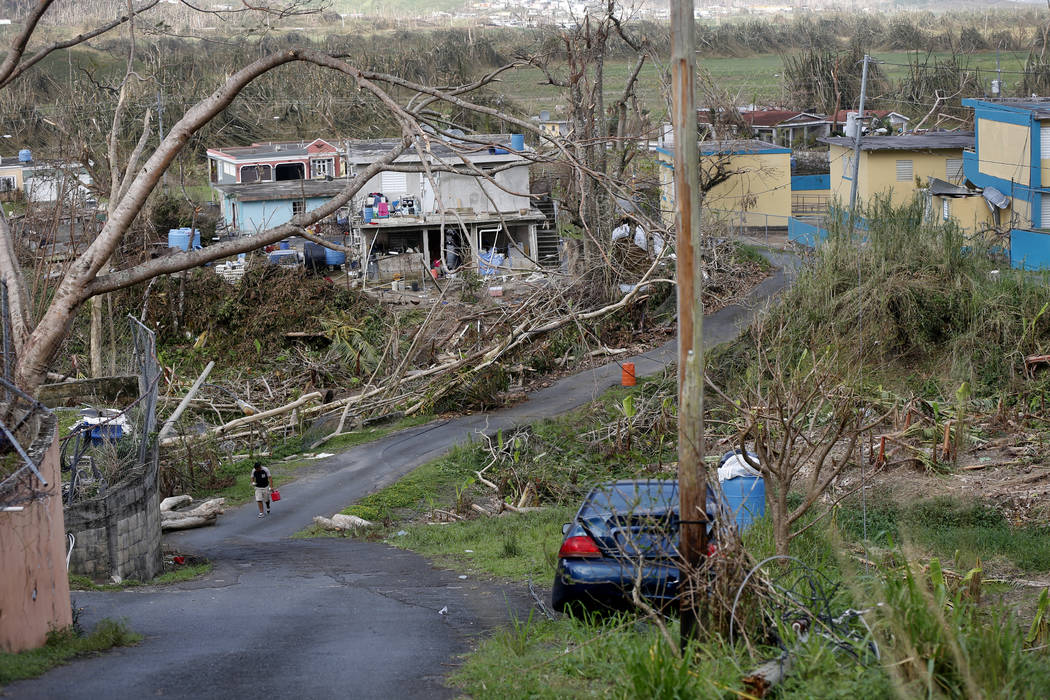 Jonathan Aponte walks with a gas can up the road to his home in the aftermath of Hurricane Maria, in Yabucoa, Puerto Rico, Tuesday, Sept. 26, 2017. Governor Ricardo Rossello and Resident Commissioner Jennifer Gonzalez, the island’s representative in Congress, have said they intend to seek more than a billion in federal assistance and they have praised the response to the disaster by President Donald Trump, who plans to visit Puerto Rico next week, as well as FEMA Administrator Brock Long. (AP Photo/Gerald Herbert) 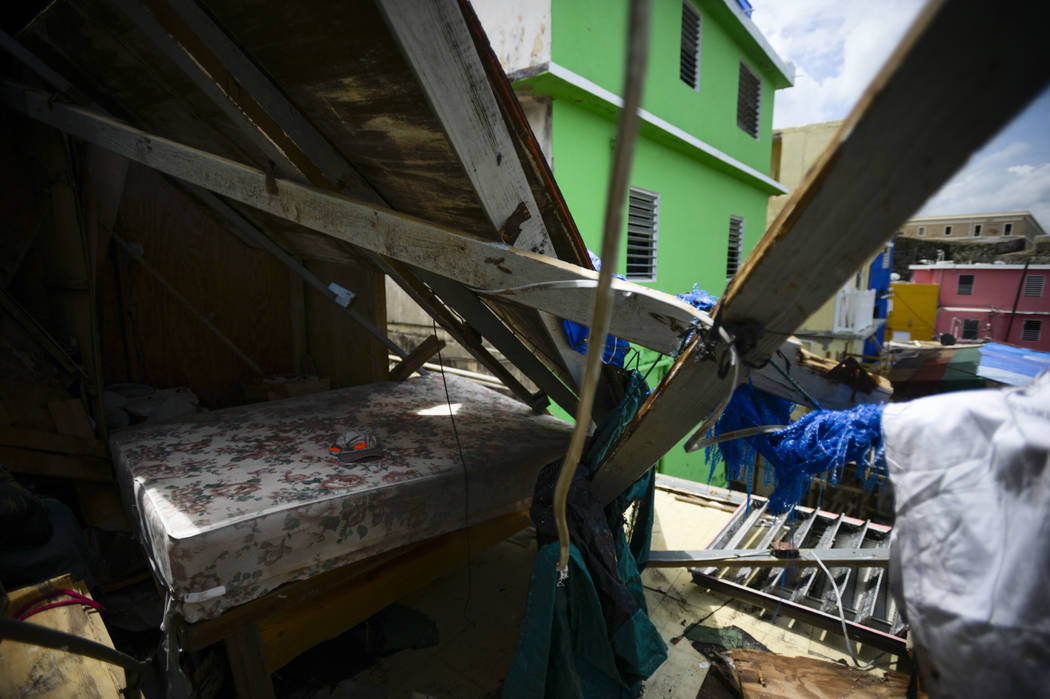 A hat rests on a bed surrounded by debris after Hurricane Maria, in San Juan, Puerto Rico, Monday, Sept. 25, 2017. The island territory of more than 3 million U.S. citizens is reeling in the devastating wake of Hurricane Maria. (AP Photo/Carlos Giusti) 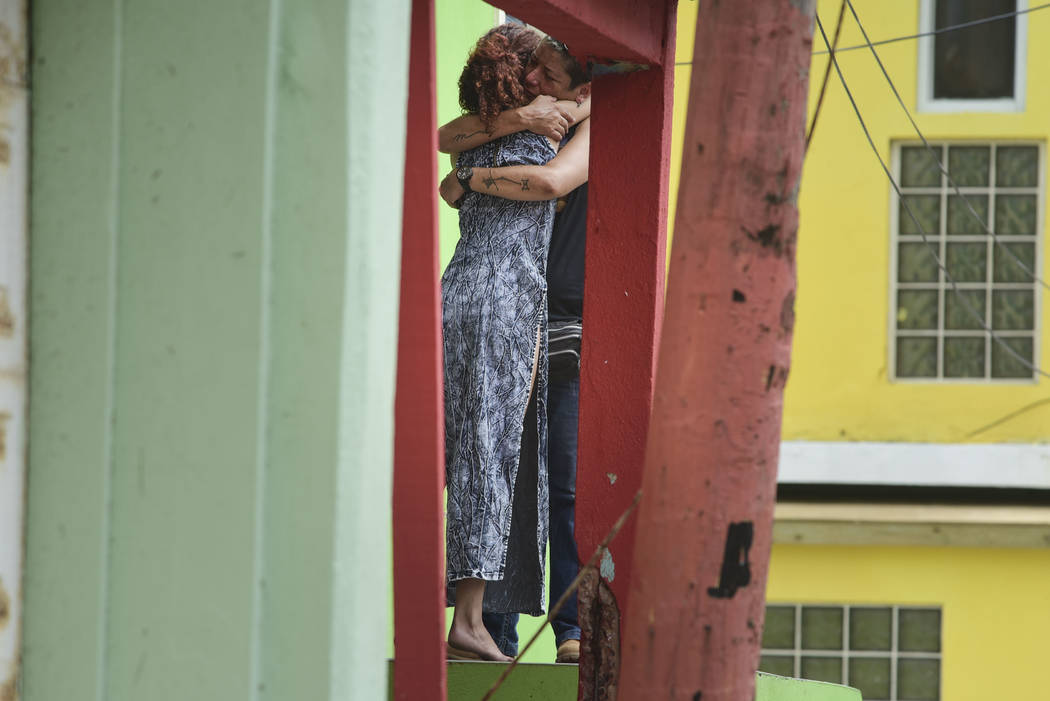 Residents at La Perla community in Old San Juan comfort one another as the community recovers from Hurricane Maria, in San Juan, Puerto Rico, Monday, Sept. 25, 2017. The island territory of more than 3 million U.S. citizens is reeling in the devastating wake of Hurricane Maria. (AP Photo/Carlos Giusti) 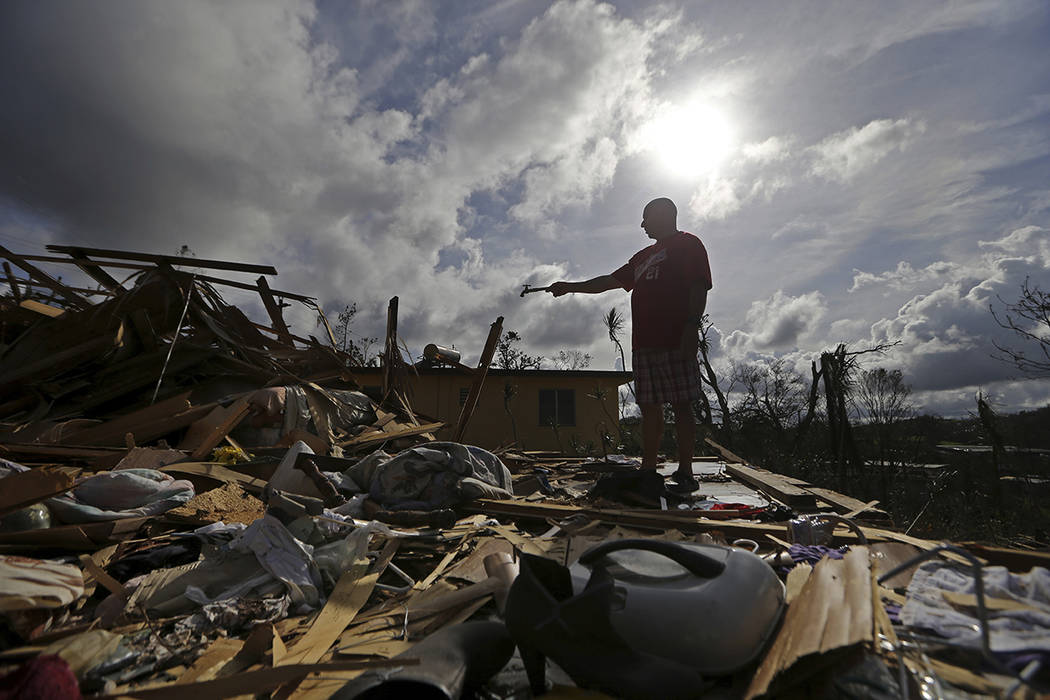 Jose Garcia Vicente holds a piece of plumbing he picked up, as he shows his destroyed home, in the aftermath of Hurricane Maria, in Aibonito, Puerto Rico, Monday, Sept. 25, 2017. The U.S. ramped up its response Monday to the humanitarian crisis in Puerto Rico while the Trump administration sought to blunt criticism that its response to Hurricane Maria has fallen short of it efforts in Texas and Florida after the recent hurricanes there. (AP Photo/Gerald Herbert)

The soldiers, part of Reno and Carson City units, will employ communications gear on the battered island, which continues to be without power. The mission will be up to 30 days.

Some members of the group have deployed to Iraq and Afghanistan. For one member, it will be his first deployment on a mission.

“I’m pretty excited,” said Spc. William Isbister, who moved to Reno from Maine. “This is one of the reasons I enlisted. In the National Guard, you can do both. You can fight ISIS and help your community.”

The team is prepared for long shifts and sleeping in cots or tents.

“It’s all really going to be on the fly,” Isbister said.

While much of the work will be technical, the soldiers could be asked to help in other ways, such as to do humanitarian work.

The exact day of the soldiers’ flight from Reno has not been finalized, but they expect to leave by Saturday.