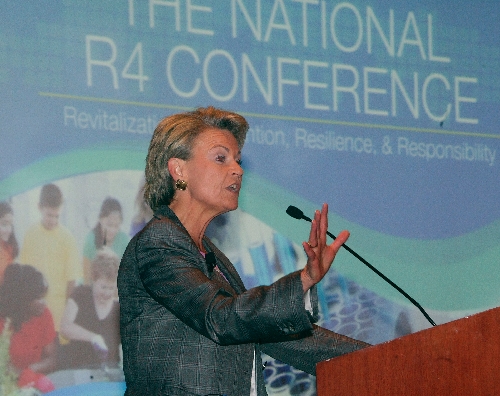 The swollen Mississippi River and its tributaries have inundated towns and farmland from Montana to Louisiana, and experts predict the flood of 2011 could rage for the rest of the summer.

What if that unwanted water could be channeled west to ease drought conditions along the overburdened Colorado River?

On Wednesday, however, she made her case to a group she hopes might be able to rally support for such an enormous undertaking: the U.S. Chamber of Commerce.

Mulroy was one of the featured speakers during the organization’s conference at Mandalay Bay.

She told attendees that the nation will need to pursue large, cooperative solutions to the problems posed by population growth and climate change.

It’s hard to imagine a solution larger than a link between the Mississippi and Colorado rivers.

Under Mulroy’s vision, floodwaters from the Mississippi and its western tributaries would be captured and diverted to irrigate crops as far away as Colorado, New Mexico and Arizona.

Those agricultural areas could then be taken off the Colorado River system, leaving enough water for Las Vegas and other growing Western cities well into the future.

About 350 million acre-feet of water a year runs down the main stem of the Mississippi River when it isn’t flooding. That’s roughly 25 times more water than the Colorado River carries in an average year.

Mississippi floodwater also could be diverted to the Central Plains to recharge the massive Ogallala Aquifer, which covers about 174,000 square miles from Texas to South Dakota.

Such a project would almost certainly take decades to complete and cost tens or even hundreds of billions of dollars.

It will never happen until people agree to stop fighting over water and start working together to secure it for future generations, Mulroy said.

Mulroy wasn’t the only one trumpeting the idea, either.

"We’ve got to start breaking down these walls that are keeping us from protecting our country and our children’s future," he said.

As it stands now, the United States has no cohesive water policy. Water issues are managed by a patchwork of disparate federal agencies and fought over by state and local entities in disputes as old as the Wild West, Mulroy said.

If the nation’s interstate highway system were built the same way as its water infrastructure, "you couldn’t leave one state and travel to another state. It would stop at the border," she said.

Wednesday’s panel discussion was held as part of the U.S. Chamber of Commerce’s "Invest in Water" initiative.

The event and others like it will be used to help the organization develop a policy position on water and urge lawmakers to act on it.

Mulroy said she is glad to see the chamber take an interest in breaking down regional barriers in favor of a systematic, national approach to the issue. The organization certainly has the clout and the connections for the job, she said.

Best of all, water is something that transcends partisan politics because it impacts everyone.

"The time has never been more right than right now to bring forward an issue that doesn’t have a red or blue coat on it. This is that issue," Mulroy said.

"Yes, it makes great folklore to fight about water, but the future is not a battleground."