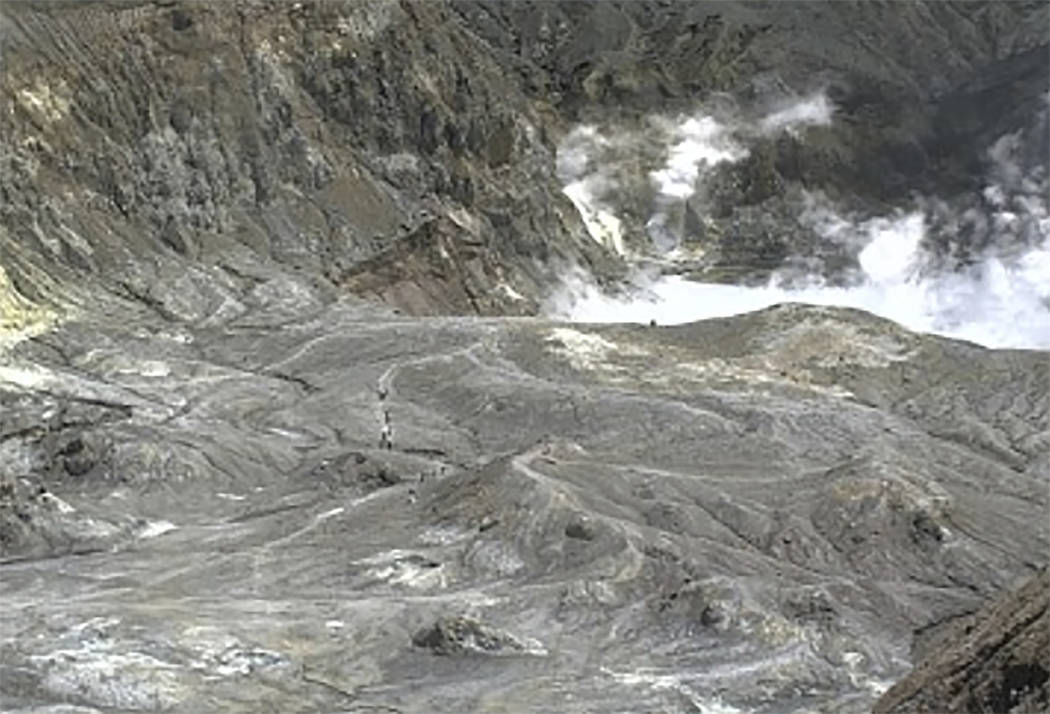 In this image released by GeoNet, tourists can be seen on a trail near the volcano's crater Monday, Dec. 9, 2019, on White Island, New Zealand. Prime Minister Jacinda Ardern says about 100 tourists were on or near White Island when the volcano erupted and some of them are missing. (GeoNet via AP) 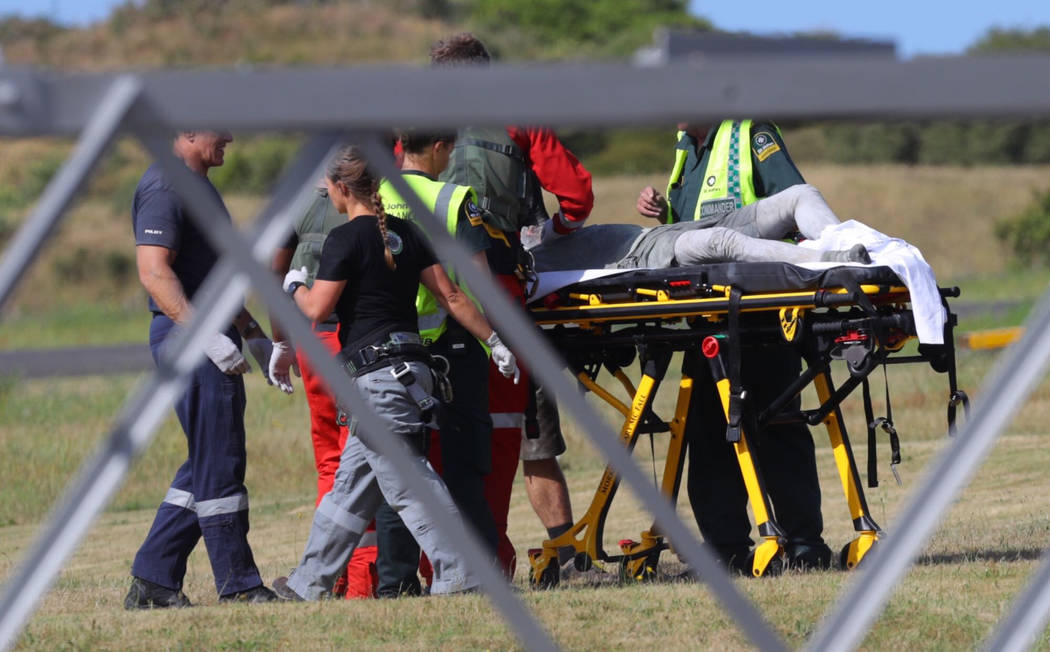 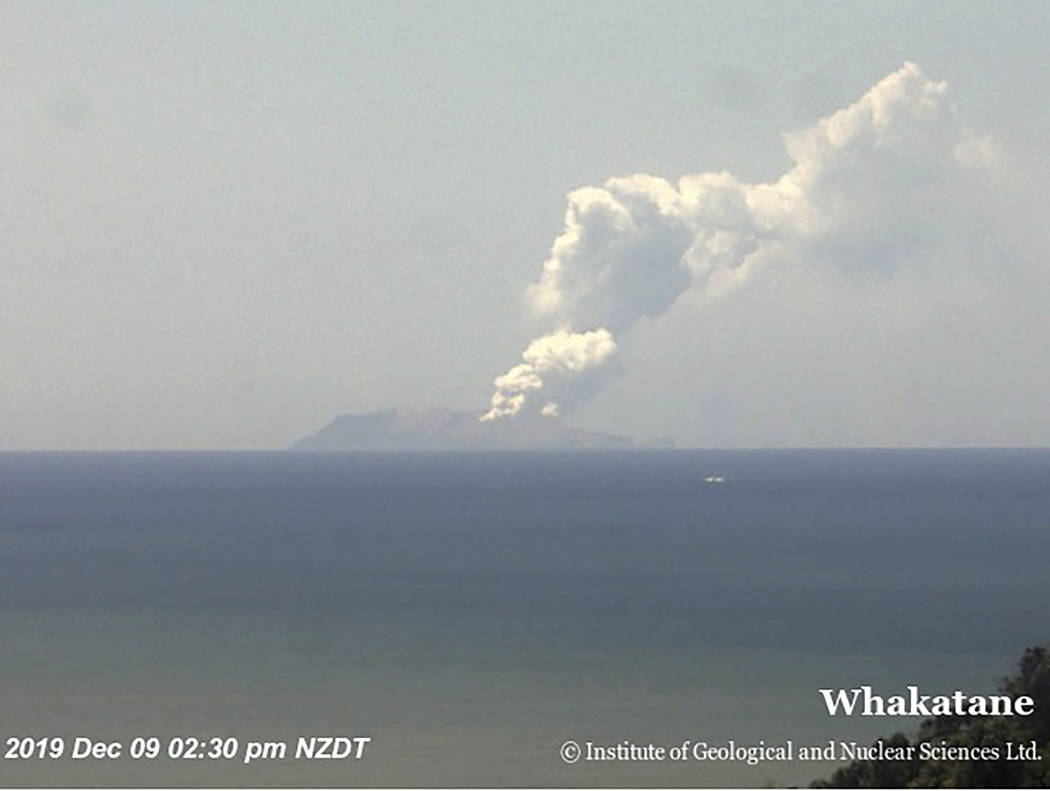 This image released by GNS Science, shows plumes of smoke from a volcanic eruption on White Island, seen from Whakatane, New Zealand Monday, Dec. 9, 2019. A volcano erupted Monday on a small New Zealand island frequented by tourists, and a number of people were missing and injured after the eruption. (GNS Science via AP) 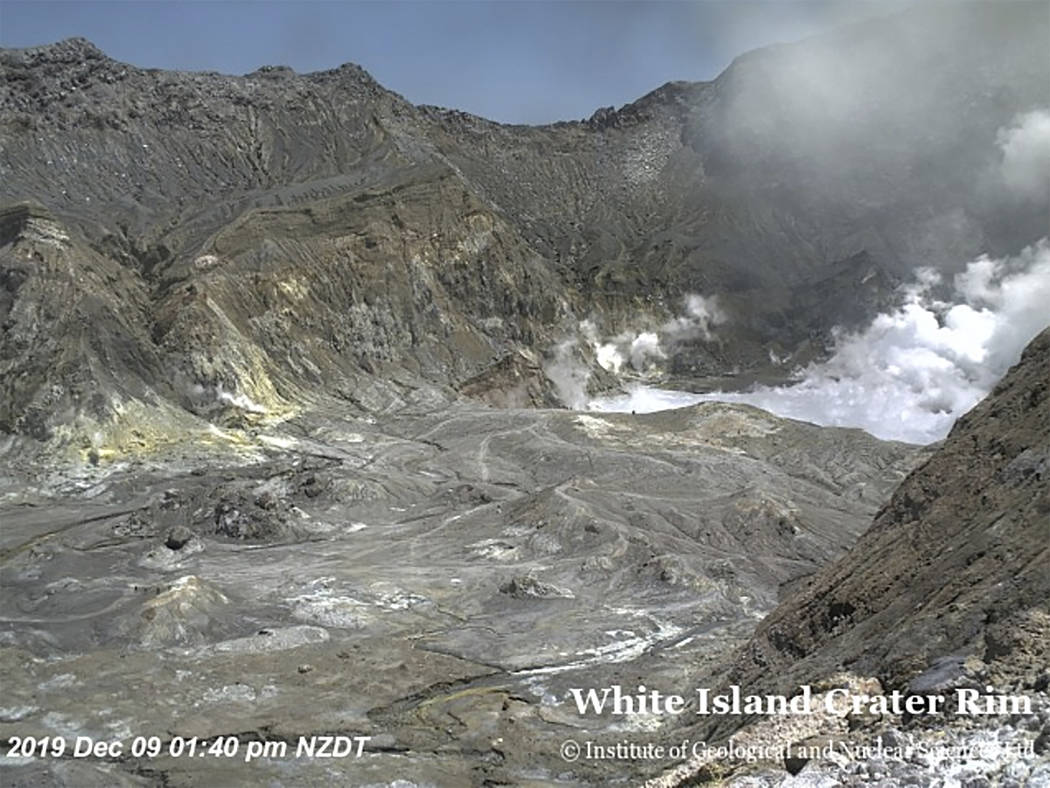 In this image released by GeoNet, tourists can be seen near the volcano's crater Monday, Dec. 9, 2019, on White Island, New Zealand. Prime Minister Jacinda Ardern says about 100 tourists were on or near White Island when the volcano erupted and some of them are missing. (GNS Science via AP)

WHAKATANE, New Zealand — A volcano off the New Zealand coast erupted Monday with a towering blast of ash and scalding steam as dozens of tourists were exploring the moon-like surface, killing five people and leaving eight others missing and feared dead, authorities said.

Hours after the disaster, the site was still considered too dangerous for rescuers to search for the missing. But aircraft flew over the island, and “no signs of life have been seen at any point,” Prime Minister Jacinda Ardern said.

The missing and injured included New Zealanders and tourists from the U.S., China, Australia, Britain and Malaysia, the prime minister said.

“My god,” Michael Schade tweeted as he posted video of the eruption. “My family and I had gotten off it 20 minutes before, were waiting at our boat about to leave when we saw it. Boat ride home tending to people our boat rescued was indescribable.”

His video showed a wall of ash and steam around White Island and a helicopter badly damaged and covered in ash. He said one woman was badly injured but seemed “strong” by the end.

Had uptick in volcanic activity

The terrifying disaster immediately raised questions of why people were allowed to visit the island some 30 miles off mainland New Zealand after scientists had noted an uptick in volcanic activity in recent weeks. White Island is the tip of an undersea volcano.

Authorities said 47 people were on the island at the time. In addition to the dead and missing, 31 survivors were hospitalized and three others were released, officials said. Some of the victims were reported severely burned.

The eruption took place about 2 p.m. and consisted of two explosions in quick succession, the prime minister said. It sent a plume of steam and ash an estimated 12,000 feet into the air. One of the boats that returned from the island had half a meter (yard) of ash on it.

Some of the visitors were passengers from the Royal Caribbean cruise ship Ovation of the Seas.

“We will offer all possible assistance to our guests and local authorities. Please keep all those affected in your prayers,” the cruise line said.

The ship had left Sydney last week and had been scheduled to sail to the New Zealand capital of Wellington on Monday night, but Royal Caribbean said it would instead remain in port on neighboring North Island until more was learned about the situation.

The GeoNet agency, which monitors volcanoes and earthquakes in New Zealand, had raised the alert level on White Island on Nov. 18 from 1 to 2 on a scale where 5 represents a major eruption, noting an increase in sulfur dioxide gas, which originates from magma deep in the volcano. It also said that volcanic tremors had increased from weak to moderate strength.

Ardern said the focus remained on the search-and-rescue mission for now and questions about whether tourists should be visiting would be addressed later.

Brad Scott, a volcanologist with research group GNS Science, said the alert level on White Island was often raised and then later dropped again without any eruption. He said there hadn’t been any major problems with tourists visiting the island in the past, though there had been some close calls.

Scott said it was not for him to say whether the island was safe enough to host tourists immediately before Monday’s eruption.

After the disaster, GeoNet raised its alert level to 4, later dropping it to 3.

“In the scheme of things, for volcanic eruptions, it is not large,” said Ken Gledhill from GeoNet. “But if you were close to that, it is not good.”

White Island is New Zealand’s most active cone volcano. About 70% of the volcano lies under the sea.

Twelve people were killed on the island in 1914 when it was being mined for sulfur. Part of a crater wall collapsed and a landslide destroyed the miners’ village and the mine itself.

The remains of buildings from another mining enterprise in the 1920s are now a tourist attraction. The island became a private scenic reserve in 1953, and daily tours allow more than 10,000 people to visit every year.

The island is also known by the indigenous Maori name Whakaari.