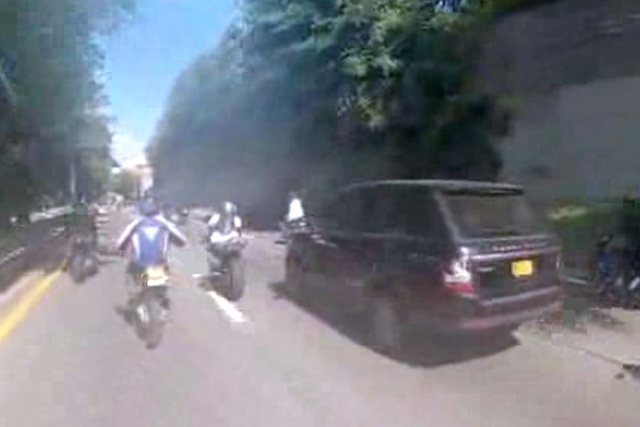 The couple attacked by a swarm of bikers in New York City in September 2013 took to the stand this week with emotional testimony against two men charged in the incident. (Screengrab/Inside Edition/NDN)

The couple attacked by a swarm of bikers in New York City in September 2013 took to the stand this week with emotional testimony against two men charged in the incident.

Alexian Lien and his wife, Rosalyn Ng, testified in New York Supreme Court about the videotaped attack that started in the southern tip of New York City and ended with injuries to multiple people in northern Manhattan.

Lien described the feeling when he realized a motorcycle rally had escalated to a mob: “Complete fear of my life, my wife’s and my daughter’s,” he said in court Monday.

Ng told the court Tuesday: “I thought we were going to die.”

Off-duty undercover officer Wojciech Braszczok and Robert Sims are on trial. They are accused of assault, among other crimes, according to court documents.

In a 911 call released in court, Ng described the events to the dispatcher: “They started chasing us, pulled us out of our car and were smashing our windows, like everything, just hitting us and threatening to kill us, I don’t know why.”

The incident began near the southern tip of Manhattan when bikers began blocking traffic and running red lights, endangering pedestrians, Lien testified. Once traffic began to move forward, the bikers were slapping the other cars open-handed as they navigated between the cars, he said.

Growing increasingly annoyed by the slow-moving traffic as the family tried to celebrate their anniversary by shopping and dinner in New Jersey, Ng threw a half-eaten plum out of the window, Lien said.

It was after this that one of the men on motorcycle punched the driver side mirror of Lien’s SUV, he said. When Ng tried to take a picture of the cyclist’s license plate, the bikers got angrier, he said.

“He was waving for other motorcyclist to come towards us. He was yelling at us, and he was threatening us,” Lien said in court Monday. “You can tell that he was screaming profanities at us, and he was also making gestures, slitting a throat gesture.”

Ng then threw a half-filled water bottle through the sunroof of their SUV to “shoo them away,” Ng testified Tuesday. When the bottle landed on the hood of the car, the bikers began to laugh.

The SUV and the bikers continued north on the highway when the SUV taps one of the motorcycles from behind.

Bikers got off of their bikes and surrounded the SUV. They used their helmets as a device to attempt to smash in the car windows, according to a video of the attack.

After cyclists were able to briefly open the passenger door, Ng told her husband to pull away: “We’re not going to survive this if we’re sitting here. So I told him just go, just go. He honked and then he turned the wheel,” she said. “I thought we went over a bike or something like that and then we just sped off.”

The SUV had run over one of the bikers, seriously injuring him. Sims’ attorney has said his client helped save that rider’s life, according to CNN affiliate WABC.

Bikers followed the SUV as it pulled off of the highway. As it was stopped at a red light, they swarmed the vehicle again and pulled Lien from the front seat.

Video provided by the Manhattan District Attorney’s office shows Lien being punched repeatedly, thrown on the ground and kicked.

At the same time, men tried to pull his wife from the passenger seat.

“They get my door open and there’s like two, three guys in there, they’re like hanging me out like this one’s pulling my leg, another grabbing my arm. They’re saying, ‘I’m going to kill you, I’m going to get you,’” Ng testified. “They couldn’t drag me out of the car because I had my seat belt on still.”

Ng then climbed into the back seat to get to her 2-year-old-daughter, who had “glass all over her” from a broken window, she testified.

Also calling 911 at the time, Ng told the dispatcher: “my husband’s bleeding all over the street, it’s, we need help. We need an ambulance,” according to recordings of the call.

Lien was bleeding badly after being pulled from his SUV, punched and kicked on the street, according to video of the attack. Ng had several minor injuries and their daughter, who was in a car seat in the back seat, suffered a cut to her hand, according to court transcripts.

Calls to the defendants’ attorneys were not immediately returned. Defense attorney John Arlia said the off-duty Braszczok did not take part in the attack and did not tell colleagues about seeing the assault because he feared for his job, according to WABC.

WABC reported that others indicted in the case pleaded guilty to various charges.

Court was not in session Wednesday. The trial resumes Thursday.