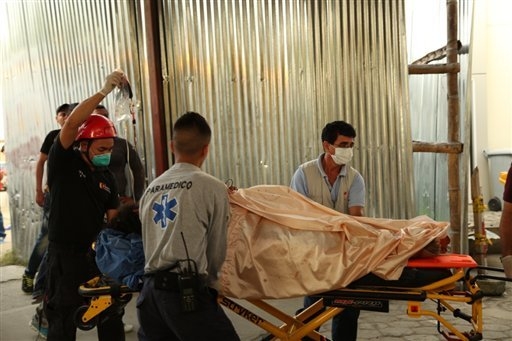 Paramedics transfer an injured person after an earthquake in Portoviejo, Ecuador, Sunday, April 17, 2016. Rescuers pulled survivors from the rubble Sunday after the strongest earthquake to hit Ecuador in decades flattened buildings and buckled highways along its Pacific coast on Saturday night. The magnitude-7.8 quake killed hundreds of people. (Carlos Sacoto/Associated Press) 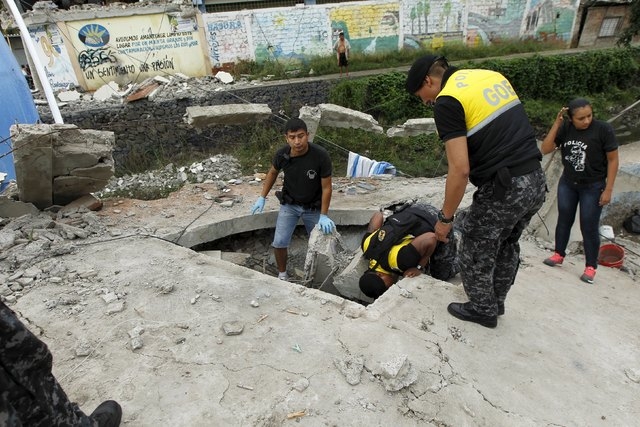 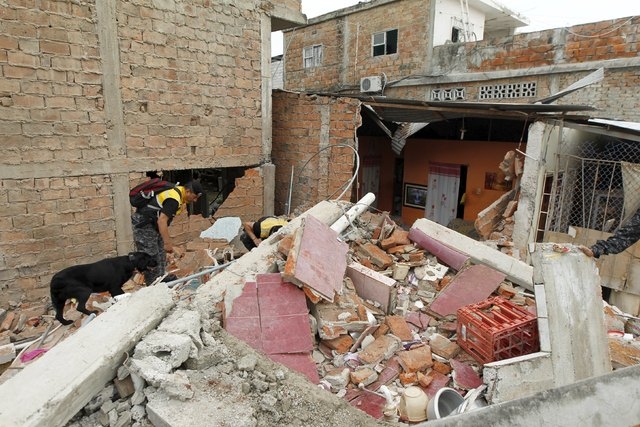 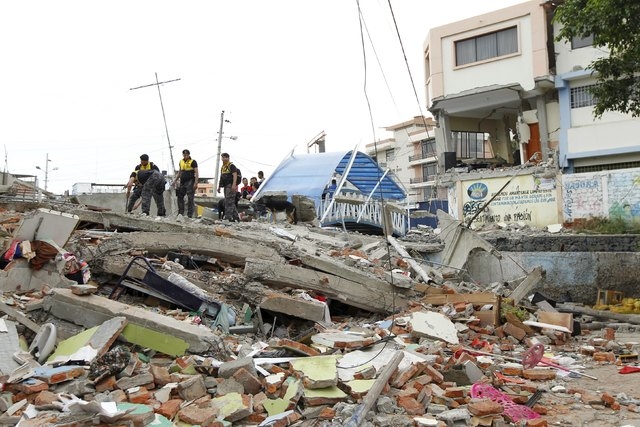 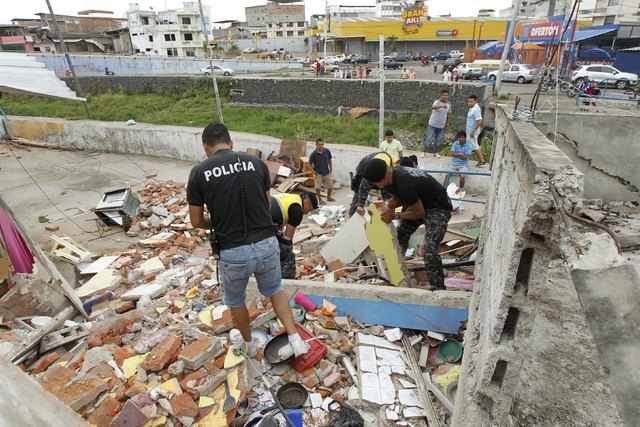 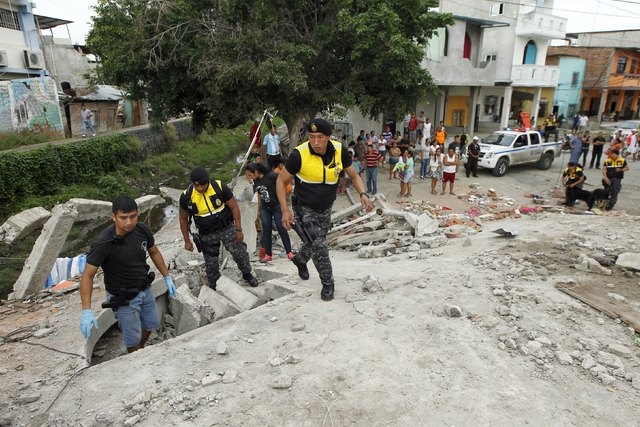 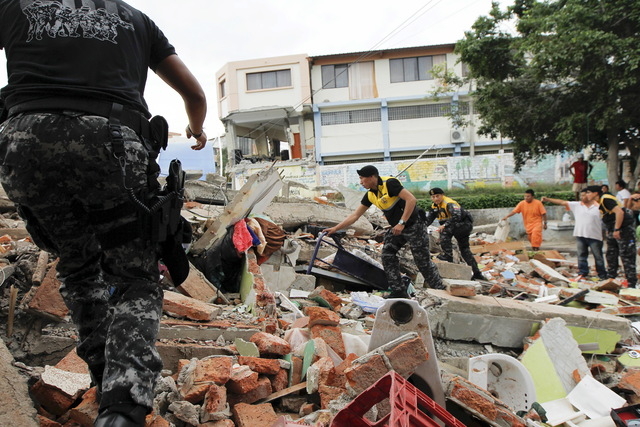 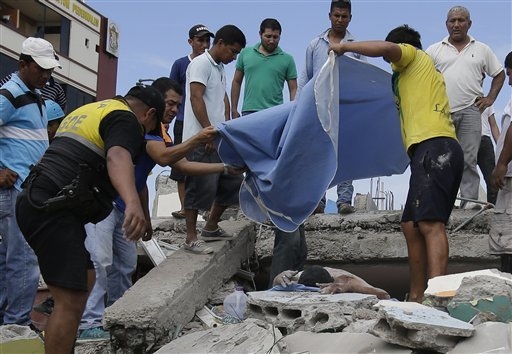 Volunteers cover a body trapped in a collapsed building, after a massive earthquake in Pedernales, Ecuador, Sunday, April 17, 2016. The strongest earthquake to hit Ecuador in decades flattened buildings and buckled highways along its Pacific coast, sending the Andean nation into a state of emergency. (Dolores Ochoa/Associated Press) 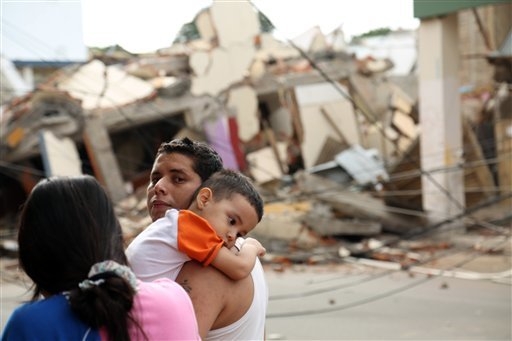 A man holds a child next to a collapsed building caused by a 7.8 earthquake in Portoviejo, Ecuador, Sunday April 17, 2016. A magnitude-7.8 quake, the strongest since 1979, hit Ecuador flattening buildings, buckling highways along its Pacific coast and killing hundreds. (Carlos Sacoto/Associated Press) 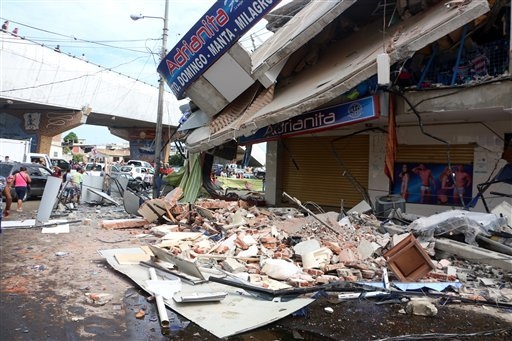 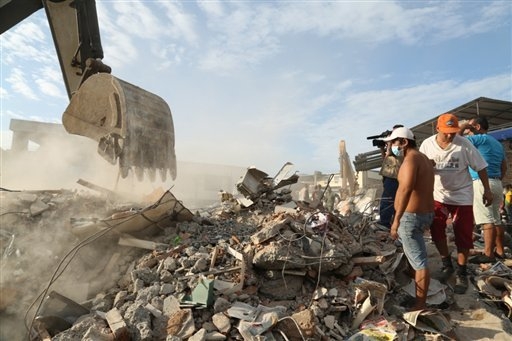 A bulldozer moves rubble after an earthquake in Portoviejo, Ecuador, Sunday, April 17, 2016. Rescuers pulled survivors from the rubble Sunday after the strongest earthquake to hit Ecuador in decades flattened buildings and buckled highways along its Pacific coast on Saturday. The magnitude-7.8 quake killed hundreds of people. (Carlos Sacoto/Associated Press) 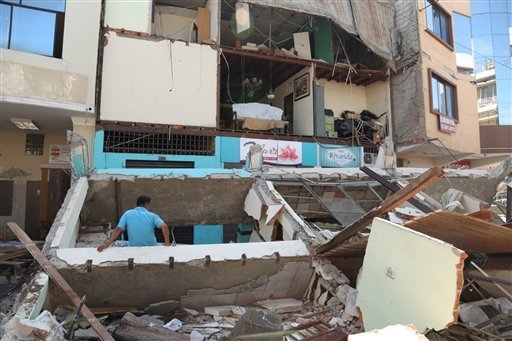 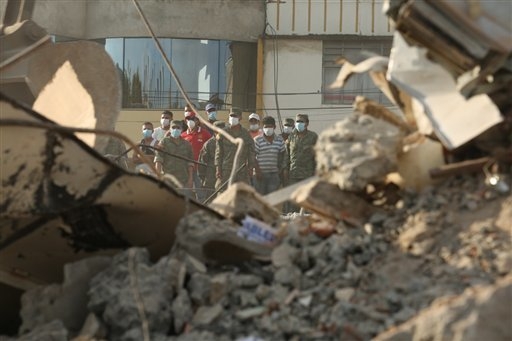 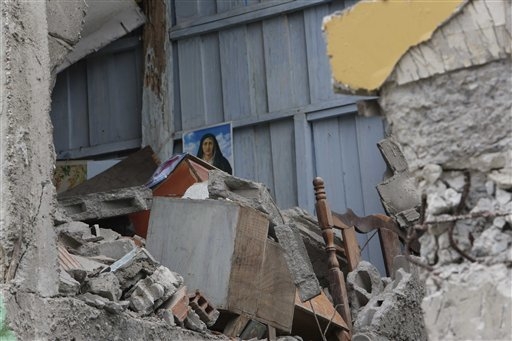 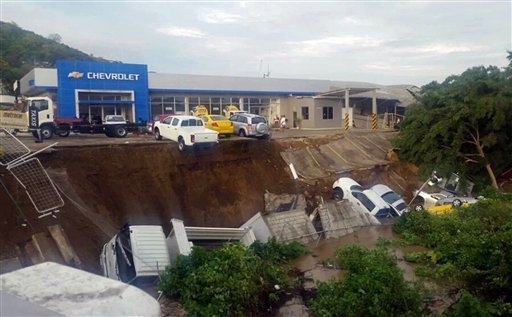 Vehicles from a car dealership hang on a precipice caused by an earthquake induced landslide in Portoviejo, Ecuador, Sunday, April 17, 2016. The strongest earthquake to hit Ecuador in decades flattened buildings and buckled highways along its Pacific coast, sending the Andean nation into a state of emergency. (Juan Fernando Molina/Associated Press) 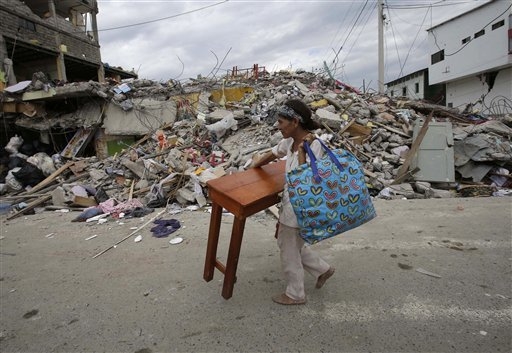 A woman carries a table through the street after an earthquake in Pedernales, Ecuador, Sunday, April 17, 2016. Rescuers pulled survivors from the rubble Sunday after the strongest earthquake to hit Ecuador in decades flattened buildings and buckled highways along its Pacific coast on Saturday. The magnitude-7.8 quake killed hundreds of people. (Dolores Ochoa/Associated Press) 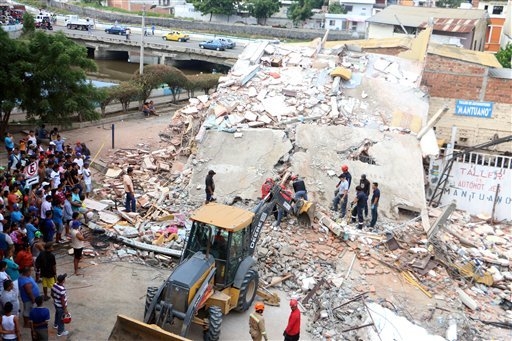 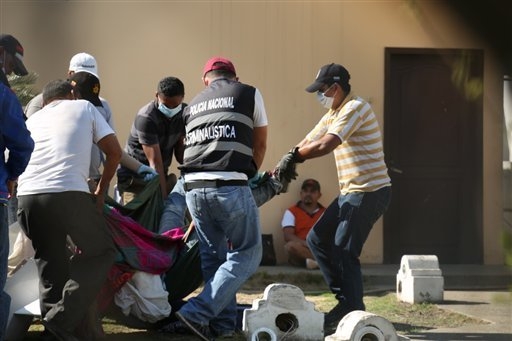 People carry a body to the morgue after an earthquake in Portoviejo, Ecuador, Sunday, April 17, 2016. Rescuers pulled survivors from the rubble Sunday after the strongest earthquake to hit Ecuador in decades flattened buildings and buckled highways along its Pacific coast on Saturday night. The magnitude-7.8 quake killed hundreds of people. (Carlos Sacoto/Associated Press)

PORTOVIEJO, Ecuador — It was supposed to be a family reunion to celebrate a young relative’s start of college. But the gathering ended in tragedy when a collapsing building crushed 17-year-old Sayira Quinde, her mother, father and toddler brother in their rusting Chevy Blazer.

A grief stricken aunt, Johana Estupinan, now is making the longest journey of her life in a funeral hearse to the town of Esmeraldas, where she will bury her loved ones and break the news of the loss to her sister’s three now orphaned children.

As Ecuador digs out from its strongest earthquake in decades, tales of devastating loss are everywhere amid the rubble. The 7.8-magnitude earthquake left a trail of ruin along Ecuador’s normally placid Pacific Ocean coast, buckling highways, knocking down an air traffic control tower and flattening homes and buildings. At least 262 people died, including two Canadians, and thousands are homeless.

Portoviejo, a provincial capital of nearly 300,000, was among the hardest hit, with the town’s mayor reporting at least 100 deaths. The Quinde family drove there from their home hours north up the coast to drop off Sayira at Estupinan’s house a week before she was to start classes at a public university on a scholarship to study medicine.

“She was my favorite niece,” Estupinan said, emotionally torn apart after waiting at the city’s morgue for hours. “I thought I was getting a daughter for the six years it was going to take her to earn a degree.”

“I never thought my life would be destroyed in a minute,” she added.

Estupinan watched as her loved ones were loaded onto a truck-sized hearse for the nighttime drive, the three older ones in dark mahogany coffins and 8-month-old Matias in a casket painted white. “It was supposed to be a short moment of family happiness but it converted into a tragedy,” she said.

She hoped to bury her relatives in Esmeraldas on Monday, but devastation there is also severe and she worried about whether the hearse could make it along roads torn apart by the quake.

The Saturday night quake knocked out power in many parts along the coast and residents who fled to higher ground fearing a tsunami had no home to return to, or feared structures still standing might collapse. With makeshift shelters in short supply, many hunkered down to spend a second straight night outdoors huddled among neighbors.

President Rafael Correa, who cut short a trip to the Vatican, flew directly to the city of Manta from Rome to oversee relief efforts. Even before touching Ecuadorean soil he signed a decree declaring a national emergency. Speaking from Portoviejo late Sunday he said the earthquake was the worst natural disaster to hit Ecuador since a 1949 earthquake in the Andean city of Ambato, which took over 5,000 lives.

“Our grief is very large, the tragedy is very large, but we’ll find the way to move forward,” Correa said. “If our pain is immense, still larger is the spirt of our people

As rescuers scrambled through the ruins near the epicenter, in some cases digging with their hands to look for survivors, humanitarian aid began trickling in. More than 3,000 packages of food and nearly 8,000 sleeping kits were being delivered Sunday. Correa’s ally, Venezuela, and neighboring Colombia, where the quake was also felt, organized airlifts. Mexico and Chile sent teams of rescuers.

“For god’s sake help me find my family,” pleaded Manuel Quijije, 27, standing next to a wrecked building in Portoviejo. He said his older brother, Junior, was trapped under a pile of twisted steel and concrete with two relatives.

“We managed to see his arms and legs. They’re his, they’re buried, but the police kicked us out because they say there’s a risk the rest of the building will collapse,” Quijije said angrily as he looked on the ruins cordoned off by police. “We’re not afraid. We’re desperate. We want to pull out our family.”

Correa said the death toll was likely to rise because many people remain unaccounted for, though he said there was evidence some survivors remain alive under the rubble. More than 2,500 people are injured.

On social media, Ecuadoreans celebrated a video of a baby girl being pulled from beneath a collapsed home in Manta.

But fear was also spreading of another night of looting after 180 prisoners from a jail near Portoviejo escaped amid the tumult. Authorities said some 20 inmates were recaptured and some others returned voluntarily, sensing that life on the outside was just as deprived.

Seeking security from any unrest, about 400 residents of Portoviejo gathered Sunday night on the tarmac of the city’s former airport, where authorities handed out water, mattresses and food. The airport was closed in 2011 and flights diverted to a larger facility in nearby Manta after Correa kicked out a U.S. drug interdiction operation stationed there.

Shantytowns and cheaply constructed brick and concrete homes were reduced to rubble along the quake’s path. In the coastal town of Chamanga, authorities estimated than 90 percent of homes had damage, while in Guayaquil a shopping center’s roof fell in and a collapsed highway overpass crushed a car, killing the driver.

The government said it would draw on $600 million in emergency funding from multilateral banks to rebuild.

But for now the digging and hoping against the odds continues.

In downtown Portoviejo, a few blocks from where a four-story hotel fell onto the Quinde family’s car, the six-story social security building is a pile of debris. Downed power cables were strewn across the street.

“The situation is heart-rending,” Jaime Ugalde, editor of El Diario, the city’s most-important newspaper, said as he surveyed the damage. “I’m going to return home and hug my wife and two kids. We’re the lucky ones. We’re alive.”