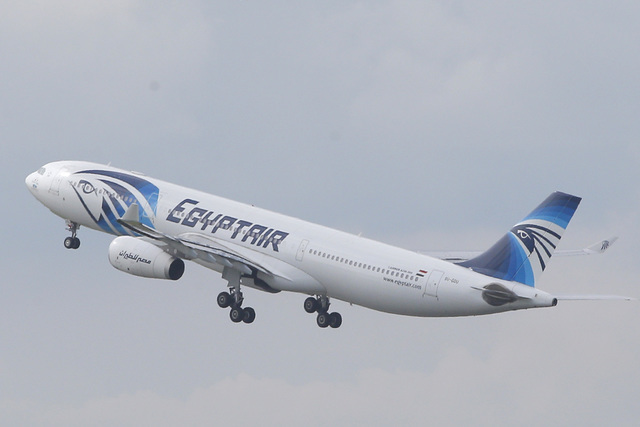 An EgyptAir Airbus A330-300 takes off for Cairo from Charles de Gaulle Airport outside of Paris, May 19, 2016. (Christophe Ena/AP) 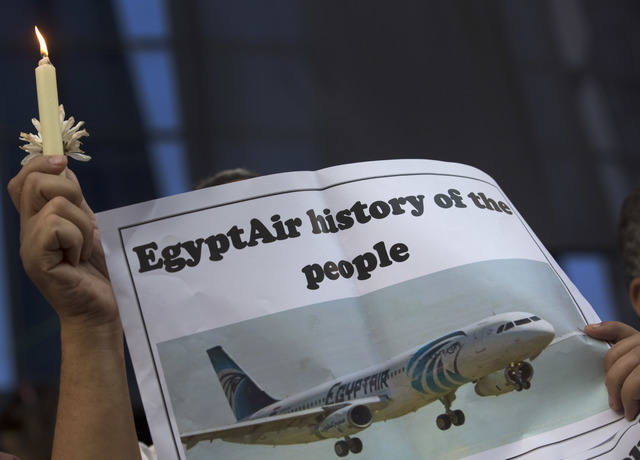 An Egyptian journalist holds a candle and a poster supporting EgyptAir during a candlelight vigil for the victims of EgyptAir flight 804 in front of the Journalists' Syndicate in Cairo, Egypt. May 24, 2016. (Amr Nabil/AP)

CAIRO — Egypt said Thursday it has recovered the cockpit voice recorder from the submerged wreckage of EgyptAir Flight 804, a major breakthrough in the investigation that could help resolve the mystery of why the jetliner plunged into the Mediterranean last month and killed all 66 people aboard.

The announcement came a day after officials said they had found the wreckage of the Airbus A320 and are putting together a map of the debris on the seabed. Such images will help investigators determine whether the plane broke apart in the air or stayed intact until it struck the water, aviation experts said.

The wreckage of the Paris-to-Cairo flight is believed to be at a depth of about 3,000 meters (9,800 feet). Previously, search crews found only small floating pieces of debris and some human remains.

Although designed to survive a crash and fire, the recorder had sustained damage, and only its memory unit — “the most important in the recorder” — was recovered unharmed, it said, without elaborating on the extent of the damage.

“This is a great achievement in a short period of time,” said Abdel-Fattah Kato, the former head of EgyptAir who is not involved in the investigation. “We are close to finding out what happened to the plane.”

The device, which records the pilots’ conversations and other noises from the cockpit, has been taken to the Egyptian port city of Alexandria, where it will be turned over to investigators for analysis. Experts say that it takes nearly 48 hours to retrieve information from the recorder.

Search teams will continue looking for the second so-called “black box” — the aircraft’s flight data recorder, which carries such information as how a plane is functioning, including its airspeed, altitude, the status of key system and the pilots’ actions. Both devices are kept in the tail of the plane.

The voice recorder provides investigators with cockpit interactions that “add a lot of insight into what occurred,” said Anthony Roman, a pilot and president of the security consultants Roman & Associates.

But he said the search teams will also want the flight data recorder, because it will help put together a “picture of events that occurred.”

Flight 804 disappeared from radar about 2:45 a.m. local time on May 19 between the Greek island of Crete and the Egyptian coast.

Leaked flight data indicated a sensor had detected smoke in a lavatory and a fault in two of the plane’s cockpit windows in the final moments of the flight.

No terrorist group has claimed responsibility, although Egypt’s civil aviation minister, Sherif Fathi, has said terrorism is a more probable cause than equipment failure or some other catastrophic event.

Investigators first learned the location of the voice recorder two weeks ago when its battery-powered signals were detected by sonars mounted on the Laplace, a French naval vessel. The signals helped narrow the search to a 5-kilometer (3-mile) area.

On Sunday, Egyptian investigators said time was running out in the search for the black boxes because they would stop emitting signals in less than two weeks due to fading battery life.

Egypt’s aviation industry has been under international scrutiny since Oct. 31, 2015, when a Russian Airbus A321 flying to St. Petersburg from the Red Sea resort of Sharm el-Sheikh crashed in the Sinai Peninsula, killing all 224 people aboard. Russia said the crash was caused by a bomb on the plane, and the local branch of the Islamic State claimed responsibility, citing Moscow’s involvement in Syria.

In March, an EgyptAir plane was hijacked and diverted to Cyprus. A man described by authorities as mentally unstable was taken into custody.