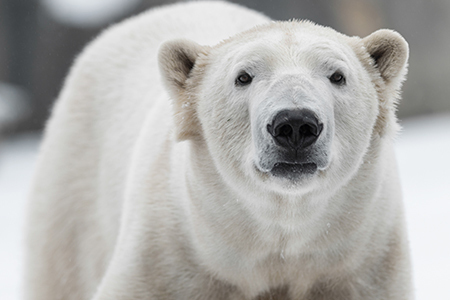 A team of Russian weather experts claim that their station on an ice-covered Arctic isle is “besieged” by polar bears, according to a report by Russian news agency TASS.

The five researchers charged with staffing the outpost on Troynoy Island say that there are about 10 adult polar bears as well as cubs circling their base. A female polar bear spends nights perched outside the station’s windows, making it dangerous for the scientists to exit. They have reportedly run out of flares and have lost at least one of their dogs to the Arctic beasts.

The presence of the polar bears has made carrying out meteorological observations difficult, reports TASS. Russian law outlaws killing polar bears, a globally listed endangered species, so scientists in the Arctic are mostly equipped with flares and guns with rubber bullets.

Vassiliy Shevchenko, the head of the organization that maintains the weather stations, said a ship with provisions is making its way to Troynoy Island to bring aid – including dogs and more flare guns – to the beleaguered scientists. But it will arrive a month from now.

“Instructions were given to the Mikhail Somov expedition vessel that will reach the station in about a month,” Shevchenko is quoted as saying, “to deliver dogs, as one of the station’s canines was killed by a bear, and also flares and other pyrotechnical devices needed to scare the animals away.”

“They sleep near the houses. Two of them walk together. They are aggressive. Recently they fought together near our house,” one scientist was quoted saying by the Siberian Times.

The scientist described the terror involved in carrying out her daily work: “So we go, your head rotating 360 degrees. Yesterday we came out and a bear was near the house. Three times our engineer fired a small flare pistol, and the bear was not even scared. We managed to scare it off with a flare, but not far.”

It’s not unusual for polar bears to approach human outposts in the Arctic, where waste is often difficult to dispose of and attracts carnivorous predators. The phenomenon has intensified, though, due to climate change.

Melting sea ice and shifting patterns in the populations of the polar bears’ marine prey stoke the desperation of bears, which are being forced to travel farther for food.

Shevchenko told TASS that he expects the bears to leave his scientists alone come the end of October, when the near-shore waters off the island freeze. But until then, the “siege” is expected to continue.