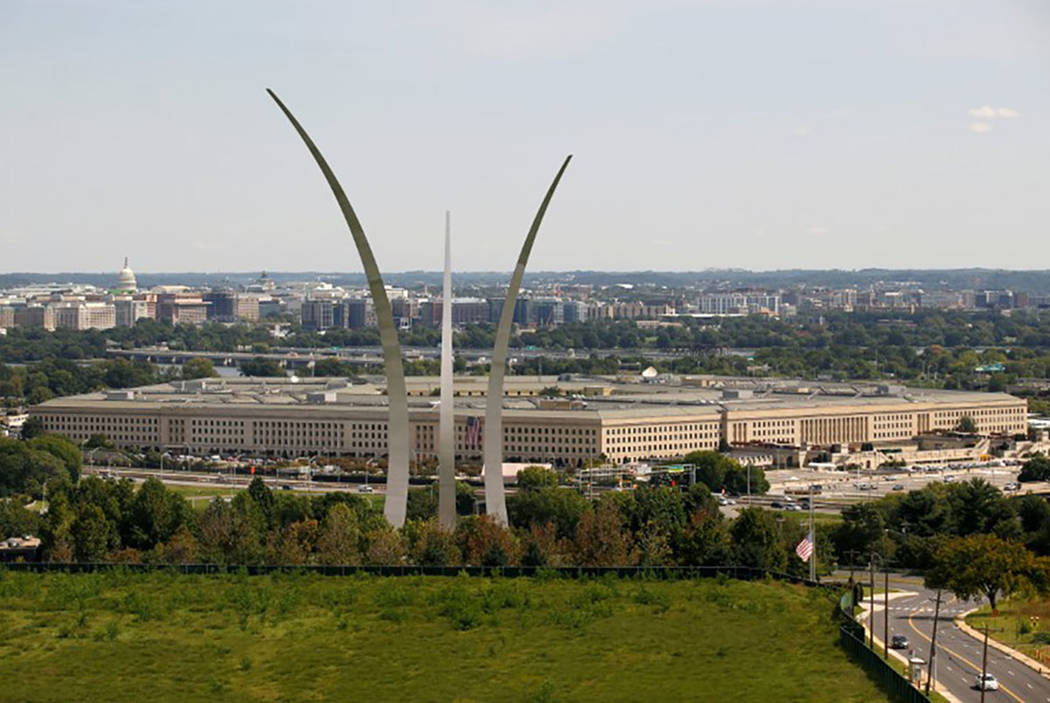 The Pentagon is shown with the Air Force Memorial in the foreground in Arlington, Virginia. (Joshua Roberts/Reuters)

WASHINGTON — Just before leaving his Defense Department job two months ago, intelligence officer Luis Elizondo quietly arranged to secure the release of three of the most unusual videos in the Pentagon’s secret vaults: raw footage from encounters between fighter jets and “anomalous aerial vehicles” — military jargon for UFOs.

The videos, all taken from cockpit cameras, show pilots struggling to lock their radars on oval-shaped vessels that, on screen, look vaguely like giant flying Tic Tacs. The strange aircraft — no claims are made about their possible origins or makeup — appear to hover briefly before sprinting away at speeds that elicit gasps and shouts from the pilots.

Elizondo, in an internal Pentagon memo requesting that the videos be cleared for public viewing, argued that the images could help educate pilots and improve aviation safety. But in interviews, he said his ultimate intention was to shed light on a little-known program Elizondo himself ran for seven years: a low-key Defense Department operation to collect and analyze reported UFO sightings.

The existence of the program, known as the Advanced Aviation Threat Identification Program, was confirmed officially for the first time Saturday by a Pentagon spokesman. The acknowledgment came in response to media inquiries, which were generated in part by a start-up company Elizondo has joined since retirement. The private company specializes in promoting UFO research for scientific and entertainment purposes.

Current and former Pentagon officials confirm that the Pentagon program has been in existence since 2007 and was formed for the purpose of collecting and analyzing a wide range of “anomalous aerospace threats” ranging from advanced aircraft fielded by traditional U.S. adversaries to commercial drones to possible alien encounters. It is a rare instance of ongoing government investigations into a UFO phenomenon that was the subject of multiple official inquiries in the 1950s and 1960s.

Spending for the program totaled at least $22 million, according to former Pentagon officials and documents seen by The Washington Post, but the funding officially ended in 2012. “It was determined that there were other, higher priority issues that merited funding and it was in the best interest of the DOD to make a change,” Pentagon spokesman Tom Crosson explained in a statement.

But officials familiar with the initiative say the collection effort continued as recently as last month. The program operated jointly out of the Pentagon and, at least for a time, an underground complex in Las Vegas managed by Bigelow Aerospace, a defense contractor that builds modules for space stations. It generated at least one report, a 490-page volume that describes alleged UFO sightings in the United States and numerous foreign countries over multiple decades.

Neither the Pentagon nor any of the program’s managers have claimed conclusive proof of extraterrestrial visitors, but Elizondo, citing accounts and data collected by his office over a decade, argues that the videos and other evidence failed to generate the kind of high-level attention he believes is warranted. As part of his decision to leave the Pentagon, he not only sought the release of videos but also penned a letter to Defense Secretary Jim Mattis complaining that a potential security threat was being ignored.

“Despite overwhelming evidence at both the classified and unclassified levels, certain individuals in the [Defense] Department remain staunchly opposed to further research on what could be a tactical threat to our pilots, sailors and soldiers, and perhaps even an existential threat to our national security,” Elizondo said in the letter, a copy of which was provided to The Post.

The first public revelations of the program came in a video conference aired in October by To the Stars Academy for Arts and Sciences, the firm Elizondo joined as a consultant after retiring from his Pentagon job. The New York Times and Politico reported the existence of the program on their websites Saturday. The Washington Post conducted several confidential interviews over two months with Elizondo and Christopher Mellon, a former deputy assistant secretary of defense for intelligence who also is an officer of the private firm.

Documents provided by the former officials included letters of support by former Senate majority leader Harry Reid, D-Nev., a key backer of the initiative who helped secure funding for the program and sought to ensure a high degree of secrecy. Elizondo said knowledge of the program was limited, even within the Pentagon itself. He said the program had multiple enemies at senior levels of the department, from officials who were either skeptical or ideologically opposed to AATIP’s mission.

“I was honored to serve at the DOD and took my mission of exploring unexplained aerial phenomena quite seriously,” Elizondo said. “In the end, however, I couldn’t carry out that mission, because the department — which was understandably overstretched — couldn’t give it the resources that the mounting evidence deserved.”

It is difficult to draw conclusions about the nature of the unidentified vessels from the videos alone. Experts generally urged caution, explaining that reported UFO sightings often turn out of have innocuous explanations.

A retired Navy pilot contacted by The Post who was involved in a 2004 encounter depicted in one of the videos confirmed that the images accurately reflected his recollection of the events. The pilot would only speak on the condition of anonymity.

Elizondo, a 22-year veteran of the department who has held top security clearance and worked on secret counterintelligence missions, said he chose to join the private venture because he believed it was the best way to continue the work he was unable to complete as a government employee.

“I left to find an environment where investigating these phenomena is priority number one,” he said.