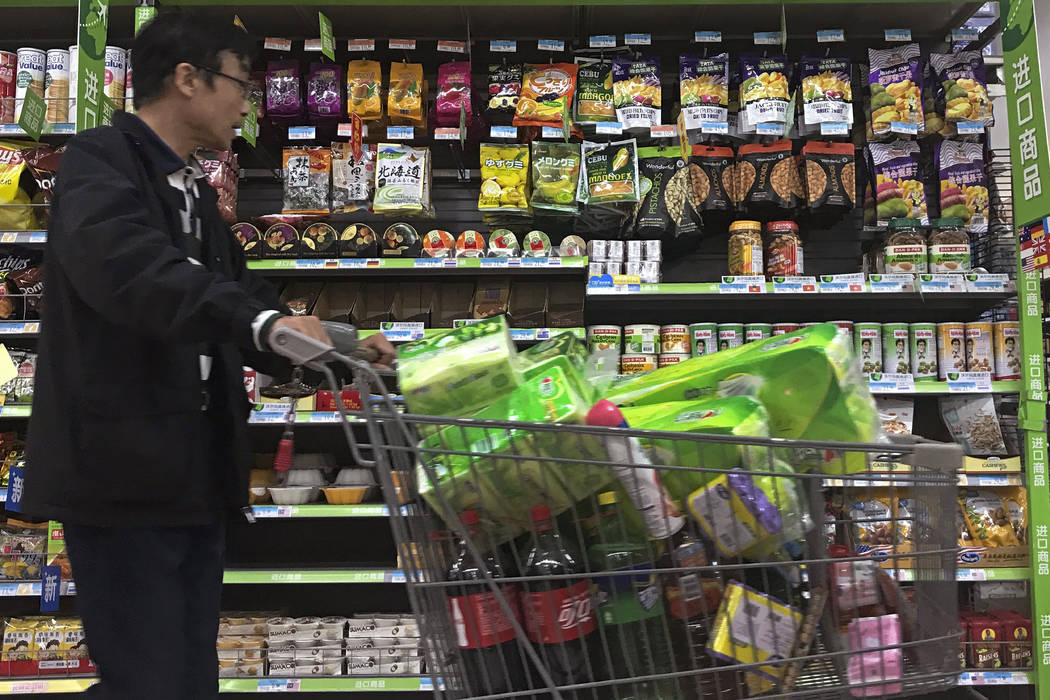 A man pushes a shopping cart past a display of nuts imported from the United States and other countries at a supermarket in Beijing, Monday, April 2, 2018. China raised import duties on a $3 billion list of U.S. pork, fruit and other products Monday in an escalating tariff dispute with President Donald Trump that companies worry might depress global commerce. (AP Photo/Andy Wong) 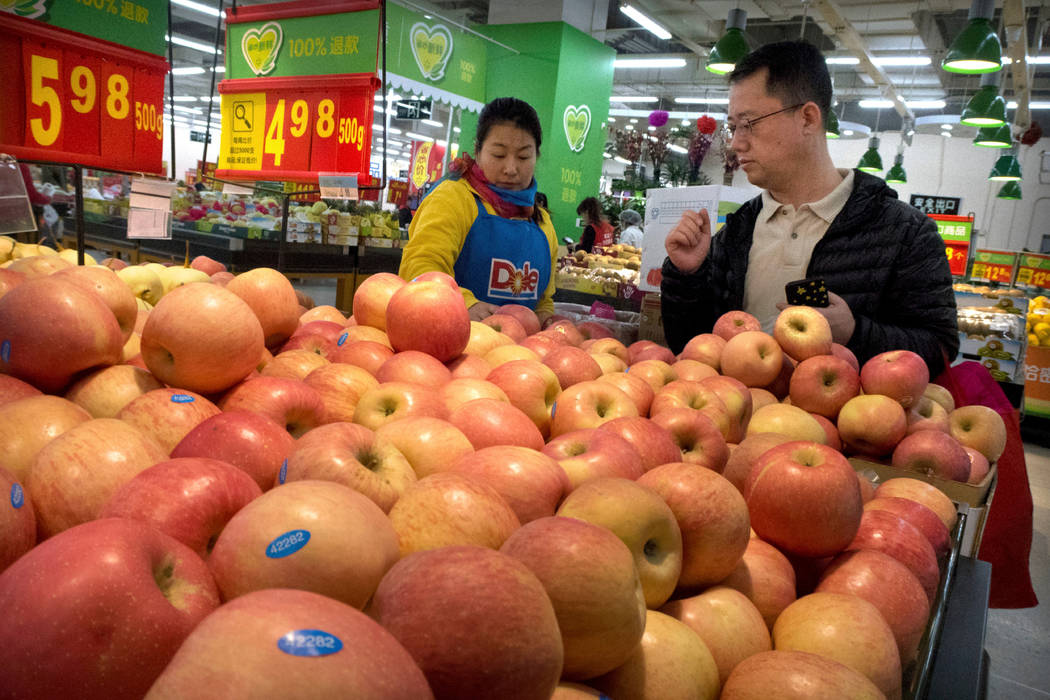 A woman wearing a uniform with the logo of an American produce company helps a customer shop for apples a supermarket in Beijing. China raised import duties on a $3 billion list of U.S. pork, fruit and other products Monday, April 2, 2018 in an escalating tariff dispute with President Donald Trump that companies worry might depress global commerce. (AP Photo/Mark Schiefelbein, FILE) 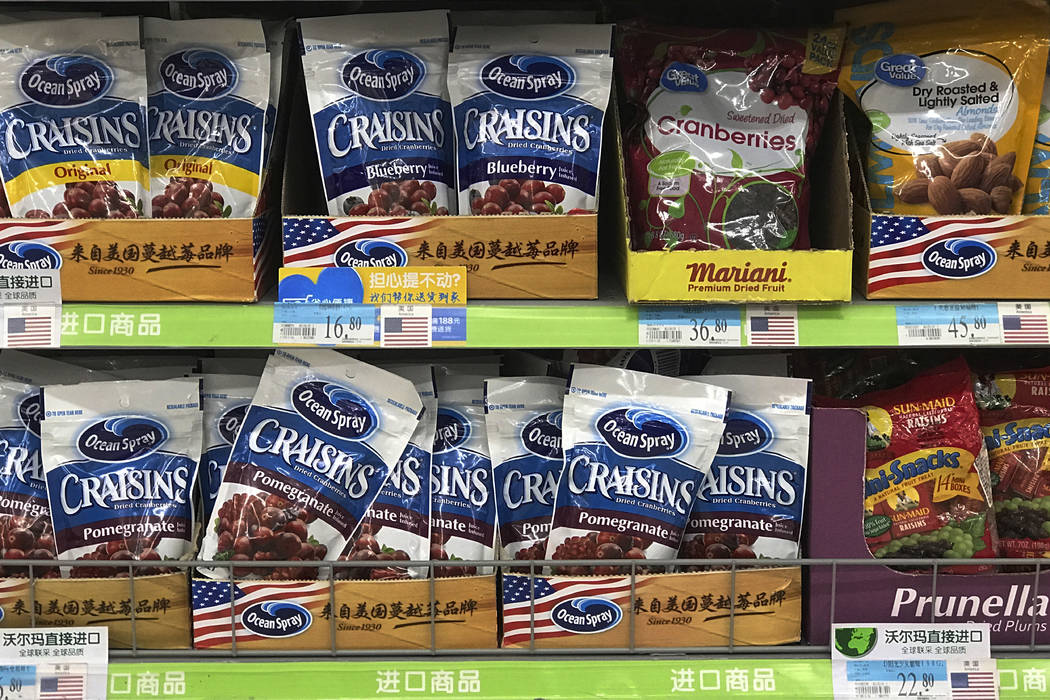 Imported raisins and nuts from the United States are displayed on sale at a supermarket in Beijing, Monday, April 2, 2018. China raised import duties on a $3 billion list of U.S. pork, fruit and other products Monday in an escalating tariff dispute with President Donald Trump that companies worry might depress global commerce. (AP Photo/Andy Wong)

WASHINGTON — First, the United States imposed a tax on Chinese steel and aluminum. Then, China counterpunched Monday with tariffs on a host of U.S. products, including apples, pork and ginseng.

On Wall Street, the stock market buckled on the prospect of an all-out trade war between the world’s two biggest economies. But it hasn’t come to that — not yet, anyway.

China is a relatively insignificant supplier of steel and aluminum to the United States. And the $3 billion in U.S. products that Beijing targeted Monday amount to barely 2 percent of American goods exported to China.

But the dispute could escalate and quickly. Already, in a separate move, the United States is drawing up a list of about $50 billion in Chinese imports to tax in an effort to punish Beijing for stealing American technology or forcing U.S. companies to hand over trade secrets.

China could respond by targeting American commercial interests uniquely dependent on the Chinese market: the aircraft giant Boeing, for example, and soybean farmers.

The possibility that the U.S. and China will descend into a full-blown trade war knocked the Dow Jones industrial average down as much as 758 points in afternoon trading. The Dow recovered some ground and finished down 458.92 points, or 1.9 percent, at 23,644.19.

But many trade analysts suggested that the Wall Street sell-off may be an overreaction.

China’s swift but measured retaliation to the U.S. steel and aluminum tariffs is meant to show “that it will not be pushed around but that it does not want a trade war,” said Amanda DeBusk, chair of the international trade department at the law firm Hughes Hubbard & Reed. “It is possible for the countries to pull back from the brink.”

“It seems to be pretty measured and proportional,” agreed Wendy Cutler, a former U.S. trade official who is now vice president at the Asia Society Policy Institute. “They didn’t seem to overreach, and they didn’t hit our big-ticket items like planes and soybeans.”

Some will feel pain

Even if China’s tariffs don’t have a huge impact on America’s $20 trillion economy, they will bring pain to specific communities.

Take Marathon County in Wisconsin, where 140 local families grow ginseng, a root that is used in herbal remedies and is popular in Asia. Around $30 million — or 85 percent — of the area’s ginseng production went to China as exports or gifts. The county, which gave Trump nearly 57 percent of its vote in 2016, holds an international ginseng festival in September, crowning a Ginseng Queen and drawing visitors from China and Taiwan.

China’s new 15 percent tariff on ginseng is “definitely going to hit the growers hard if this happens,” said Jackie Fett, executive director of the Ginseng Board of Wisconsin. “It is the livelihood of many people. … We’re still holding on to a little bit of hope” that the tariffs can be reversed.

Jim Schumacher, co-owner of Schumacher Ginseng in Marathon, Wisconsin, said the 15 percent tax will hurt: “You’ve got to be price-competitive, even if you have the top-quality product. We’re definitely concerned. We hope something can be resolved.”

Trump campaigned on a promise to overhaul American trade policy. In his view, what he calls flawed trade agreements and sharp-elbowed practices by China and other trading partners are in part responsible for America’s gaping trade deficit — $566 billion last year. The deficit in the trade of goods with China last year hit a record $375 billion.

In his first year in office, Trump’s talk was tougher than his actions on trade. But he has gradually grown more aggressive. In January, he slapped tariffs on imported solar panels and washing machines. Last month, he imposed duties on steel and aluminum imports — but spared most major economies except China and Japan.

“Given the increasingly hostile rhetoric backed up by tangible trade sanctions already announced by both the U.S. and China, it will take a determined effort on both sides to come up with a mediated compromise that tamps down trade tensions and allows both sides to save face,” said Eswar Prasad, professor of trade policy at Cornell University.

If the dispute escalates, China can pick more vulnerable targets. In the year that ended last Aug. 31, America’s soybean farmers, for instance, sent $12.4 billion worth of soybeans to China. That was 57 percent of total U.S. soybean exports.

Brent Bible, a soybean and corn farmer in Lafayette, Indiana, has appeared in TV ads by the advocacy group Farmers for Free Trade, calling on the Trump administration to avoid a trade war.

“We’re kind of caught in the crossfire,” he said.