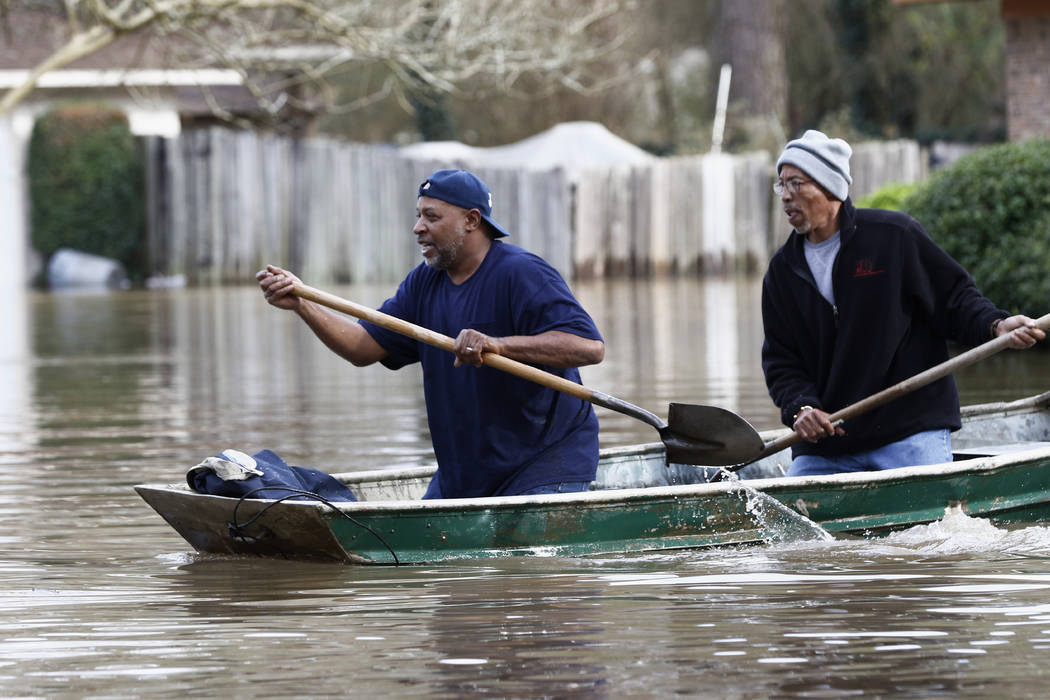 Jackson, Miss., homeowners use shovels to work their way through Pearl River floodwater in this Jackson, Miss., neighborhood Sunday, Feb. 16, 2020. Residents of Jackson braced Sunday for the possibility of catastrophic flooding in and around the Mississippi capital as the Pearl River rose precipitously after days of torrential rain. (AP Photo/Rogelio V. Solis) 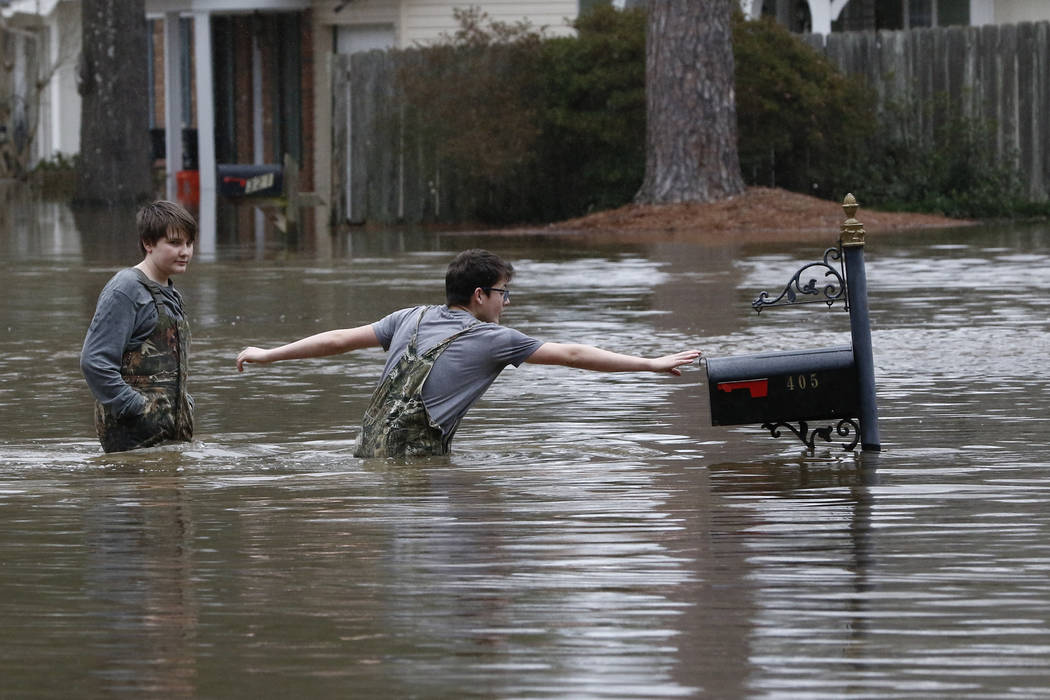 Blaine Henderson, right, reaches to tag a mailbox as Pearl River as he and his friend Jonah Valdez, both 12, play in the floodwaters of this northeast Jackson, Miss., neighborhood, Sunday, Feb. 16, 2020. (AP Photo/Rogelio V. Solis) 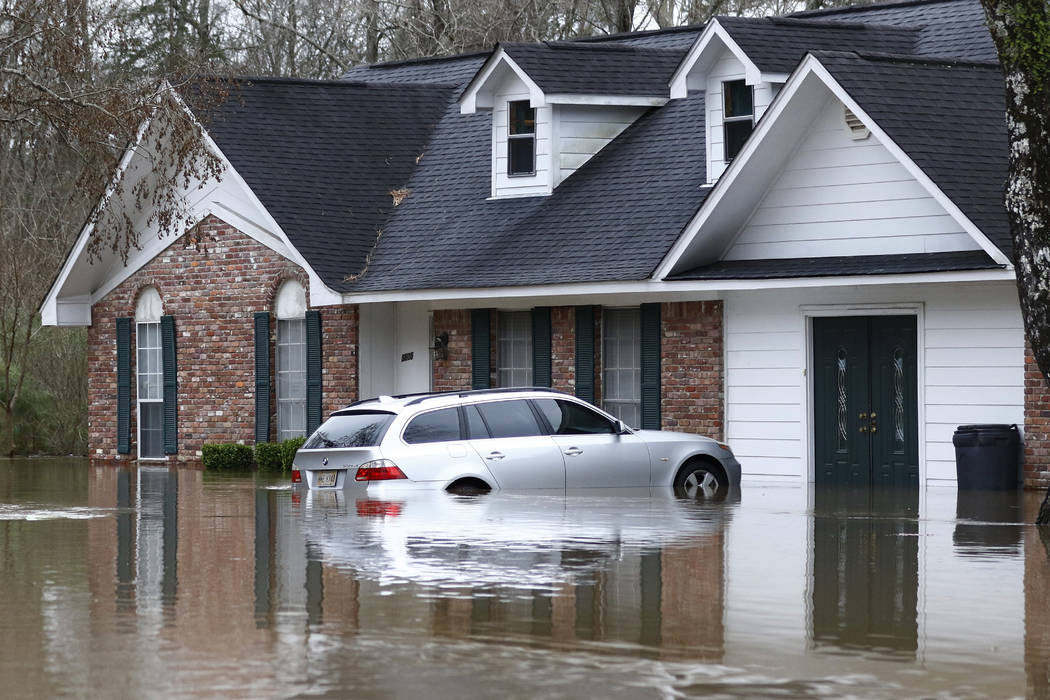 Water from the Pearl River floods this northeast Jackson, Miss., home and car, Sunday, Feb. 16, 2020. Authorities believe the flooding will rank as third highest, behind the historic floods of 1979 and 1983. (AP Photo/Rogelio V. Solis) 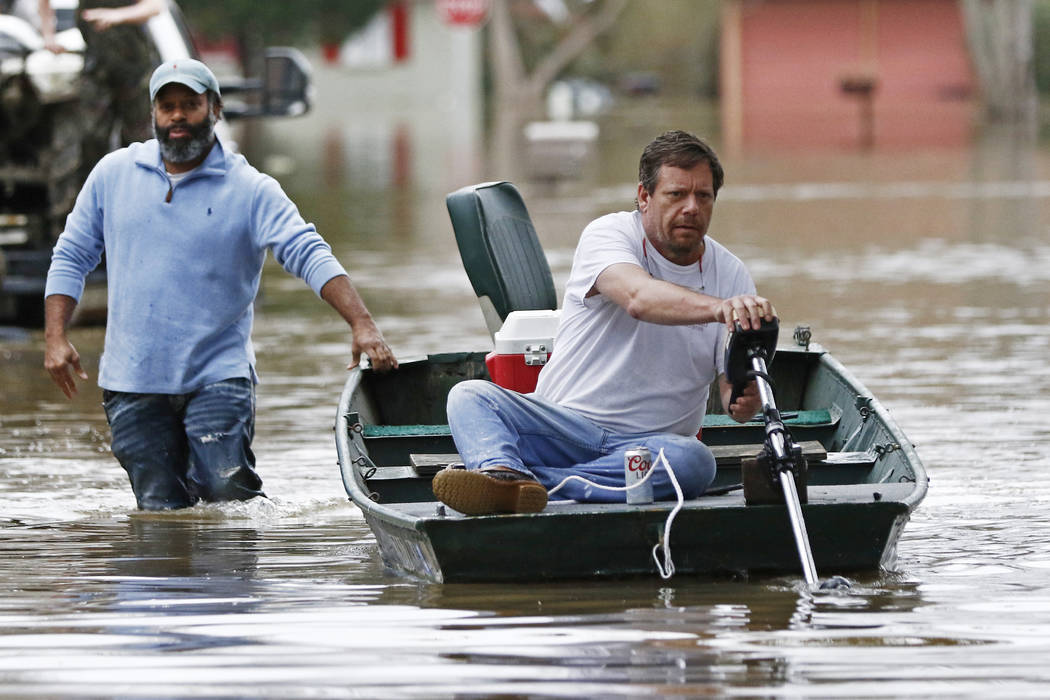 Marcus Morris steadies the boat as his neighbor Chris Sharp readies the trolling motor for another trip through their Pearl River flooded neighborhood in Jackson, Miss., Sunday, Feb. 16, 2020. Residents of Jackson braced Sunday for the possibility of catastrophic flooding in and around the Mississippi capital as the Pearl River rose precipitously after days of torrential rain. (AP Photo/Rogelio V. Solis) 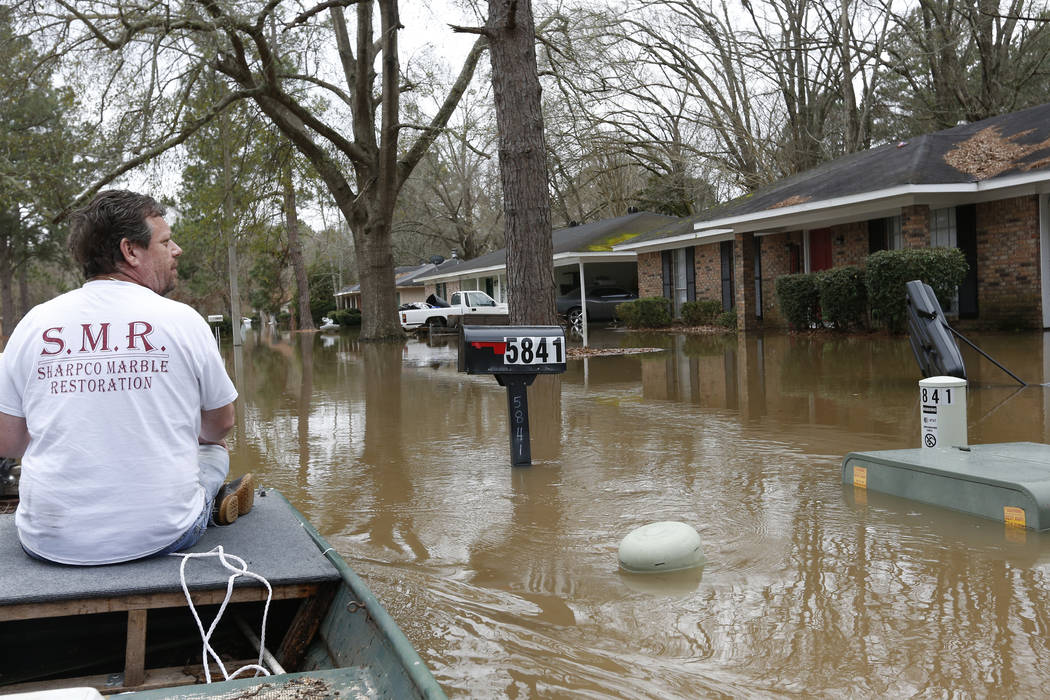 Chris Sharp studies the water damage from the Pearl River that floods his neighborhood in Jackson, Miss., Sunday, Feb. 16, 2020. Residents of Jackson braced Sunday for the possibility of catastrophic flooding in and around the Mississippi capital as the Pearl River rose precipitously after days of torrential rain. (AP Photo/Rogelio V. Solis)

JACKSON, Miss. — Days and days of heavy rain have created a dilemma for authorities managing dams along swollen rivers in Mississippi and Tennessee. The water has to be released eventually, worsening the flooding for people living downstream.

Dramatic video posted by a Tennessee fire department showed the impact: Two houses tumbled down a bluff over the Tennessee River, while many others have been swamped to their rooftops, as entire neighborhoods disappear in muddy water below the Tennessee Valley Authority’s Pickwick Reservoir.

“It absolutely kills you, knowing that” houses are getting destroyed downstream from the dam, TVA spokesman Jim Hopson told The Associated Press on Monday. “We have engineers on duty 24-7 trying to figure out what’s the most effective way to move this water downstream with the least impact. They feel it. I feel it.”

February’s rains have been “400 percent of normal, and we have more coming in this week. It’s kind of a never-ending battle,” Hopson added.

Mississippi still faces a “precarious situation that can turn at any moment,” Gov. Tate Reeves said Sunday in Jackson, where the Pearl River was expected to peak Monday after flooding the state capital and its surroundings. With more rain on the way this week, it could be days before the flood waters begin to recede, he warned.

In one Jackson neighborhood, residents paddled canoes, kayaks and small fishing boats to check on their houses, giving lifts to other neighbors. Some were able to enter their homes, while others peeked into the windows to see what, if any damage, had been done inside. Floodwaters lapped at mailboxes, street signs and cars that had been left in driveways.

In a bit of good news, officials at a reservoir upriver of the capitol said Sunday that water levels in the reservoir had stabilized, allowing them to send less water downriver. The National Weather Service, which had been anticipating the river would crest Sunday at 38 feet, on Sunday slightly reduced that to 37.5 feet. The river is now anticipated to crest Monday.

But even with that development, officials urged residents to pay attention to evacuation orders, check on road closures before traveling and stay out of floodwaters, warning that even seemingly placid waters could mask fast-moving currents and pollution. Law enforcement officials went door to door telling people to evacuate.

“We expect the river to continue to rise over the next 24 hours or so, ” Reeves said at a news conference in Jackson. “We are not out of the woods yet.”

The heavy rains and flooding has affected a wide area. Mississippi emergency management officials said Sunday that they had received preliminary damage reports from 11 counties connected with the severe weather that began on Feb. 10.

And in Savannah, Tennessee, which sits just below the Pickwick Dam, the Hardin County Fire Department said people were safely evacuated from a two-story home overlooking the Tennessee River before a bluff gave way and the home broke apart, the wreckage sliding hundreds of feet down to the water. Dozens of other homes in more low-lying areas were swamped, the department’s drone video showed.

The Pickwick is the next-to-last dam in the TVA’s system, and all the water from a river basin stretching into Virginia and Georgia has to flow through it before reaching the Ohio River and then the Mississippi. Water levels behind upstream tributary dams used to contain the flooding have risen as much as 40 feet this month, but even then, the Pickwick was releasing 2.36 million gallons per second Monday, down only slightly from 2.5 million gallons per second Sunday night, Hopson said.

“Mother Nature is really the one in charge — we simply try to manage what Mother Nature gives us, to minimize the impacts along the 652-mile Tennessee River and its thousands of miles of tributaries and streams,” Hopson said.

Nearly 2,400 structures across the three Mississippi counties closest to the Pearl River and its Barnett Reservoir — Hinds, Rankin and Madison — could get water indoors or be surrounded by floods, said Malary White, of the Mississippi Emergency Management Agency.

Jackson Mayor Chokwe Lumumba said power had been shut off to 504 residences as a safety precaution, and about 30 people were at a shelter.

On Saturday night, officials released water from the nearby Barnett Reservoir to control its levels. They urged residents in northeastern Jackson who live in the flood zone downstream from the reservoir to leave immediately. By Sunday morning, Reeves said the reservoir’s inflow and outflow had equalized.

‘You know when to get out’

John and Jina Smith had packed up as much as they could and left their home as waters rose Thursday in the suburb of Flowood. They returned on Sunday in their neighbor Dale Frazier’s rowboat to check on the damage, then got in their own canoe and rowed away.

“We’ve been able to stay in here when the water gets up,” John Smith said. “But as you’ve watched it over the years, you know when to get out. It’s time to get out this time.”

A foot and a half of water was inside his house, Smith said. He’d already been in touch with a contractor and insurance agent to rebuild their home, where he and his wife enjoy sitting on their back porch and watching deer and other wildlife.

“It’s going to take a while for us to rebuild, but we are safe, and we’re all OK,” Jina Smith said.

Once the Pearl River crests Monday, it will take the water three to four days to go down significantly. Part of the reason is that forecasters expect more rain between midday Tuesday and Wednesday evening.

“It will be days before we are out of the woods and waters start to recede,” Reeves said.