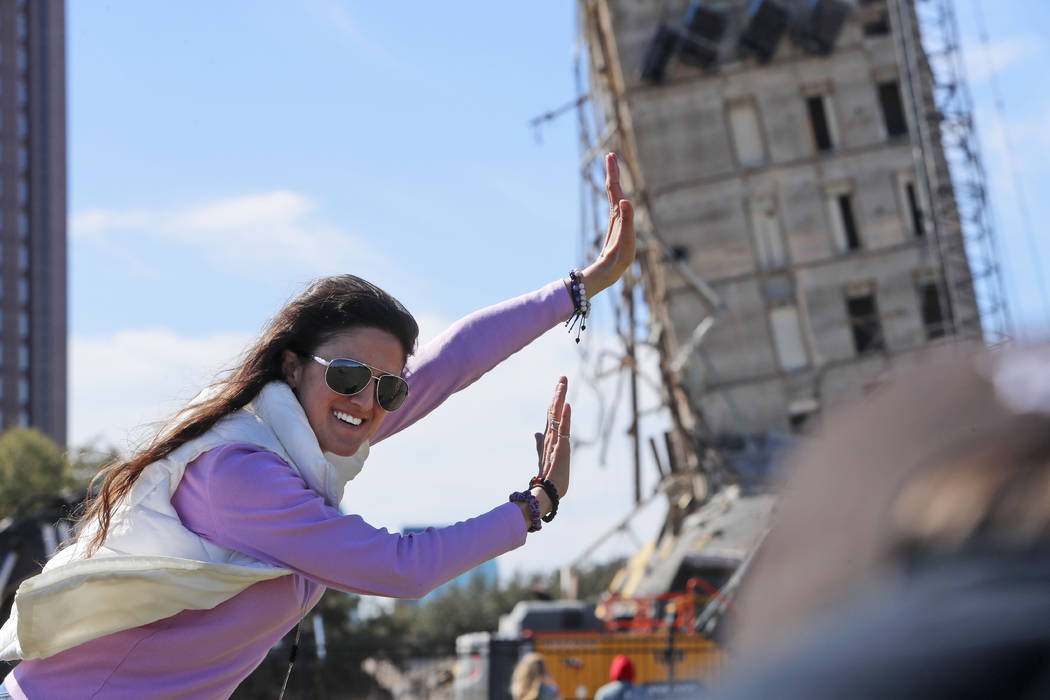 Megan Dority poses for a photo with the so called "Leaning Tower of Dallas" as a crew works to topple the structure north of downtown Dallas, Monday, Feb. 24, 2020. The still standing structure is part of an 11-story building that found a second life online after surviving a first demolition attempt. The former Affiliated Computer Services building inspired jokes and comparisons to Italy's Leaning Tower of Pisa when a Feb. 16 implosion failed to bring down its core. The company that engineered the blast said some explosives did not go off. (AP Photo/LM Otero) 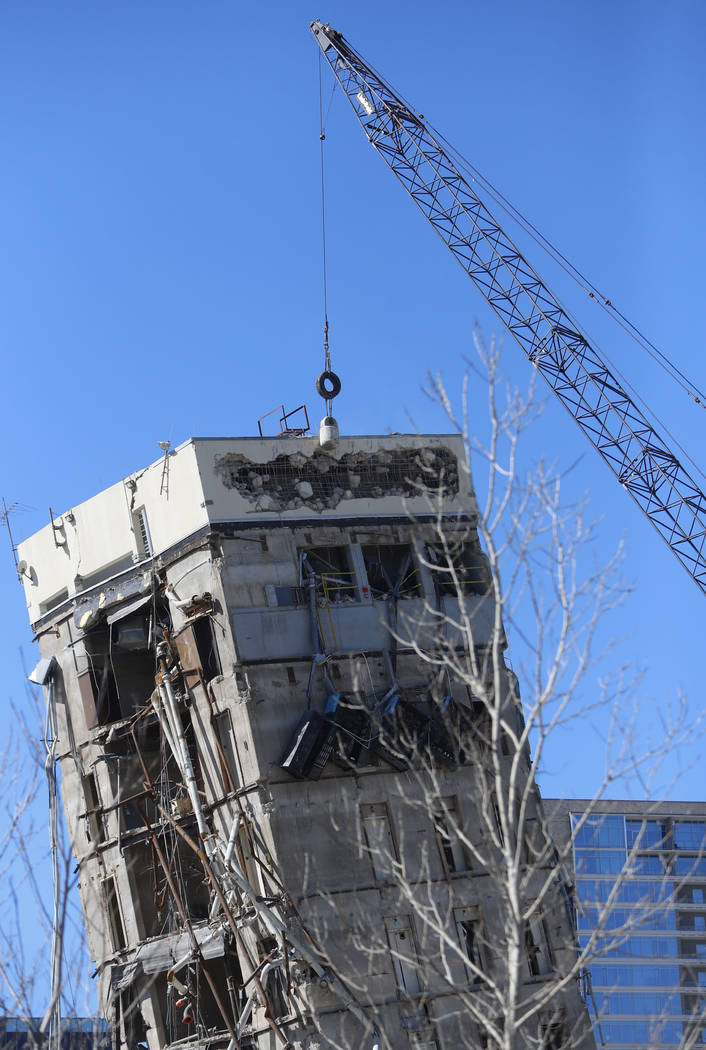 A wrecking ball smashes against the "Leaning Tower of Dallas" north of downtown Dallas, Monday, Feb. 24, 2020. The still-standing structure is part of the 11-story former Affiliated Computer Services building that found a second life online after a Feb. 16 implosion attempt. The company that engineered the blast said some explosives did not go off. (AP Photo/LM Otero) 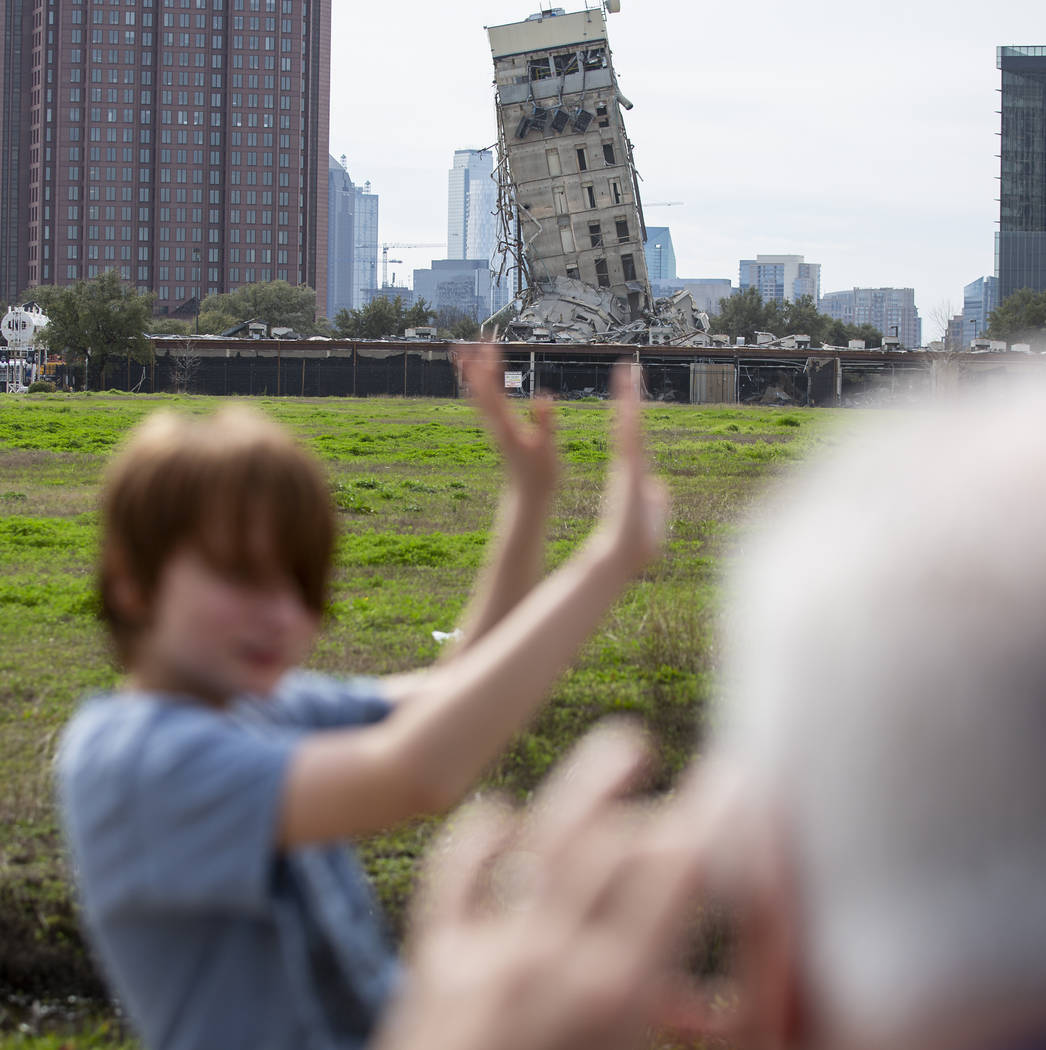 Randy Gibson takes a photo of his son Andrew, 11, in front of the 'Leaning Tower of Dallas' on Monday, Feb. 17, 2020 in Dallas. A demolition of the former Affiliated Computer Services tower on Sunday morning left the central core behind. (Juan Figueroa/The Dallas Morning News via AP) 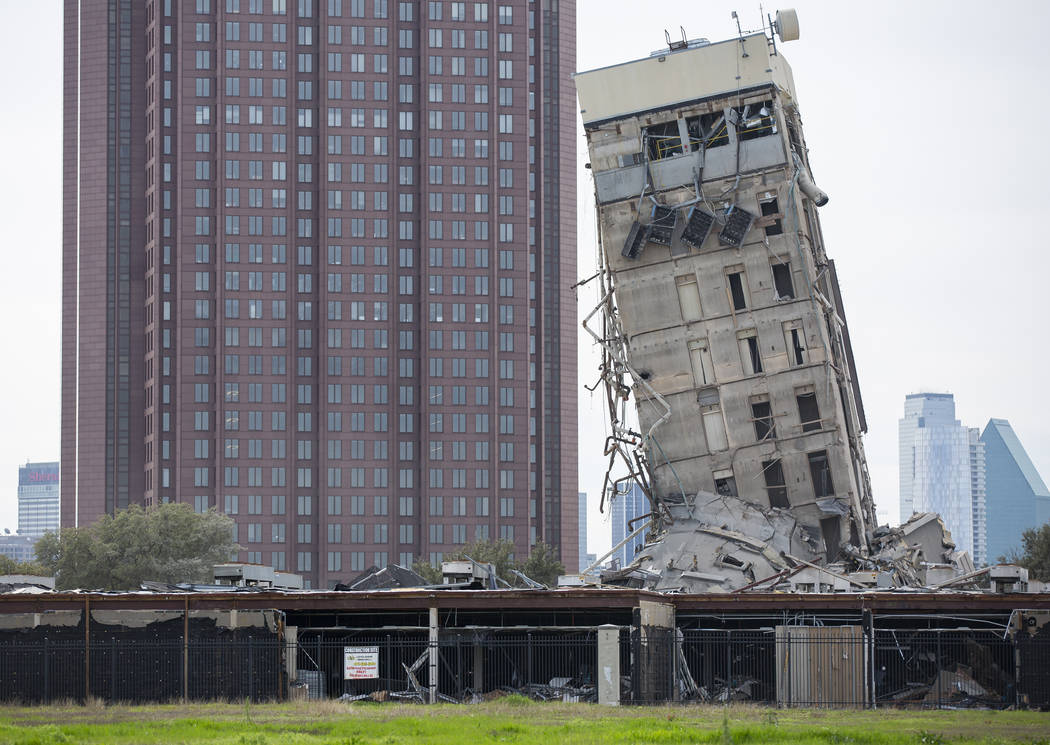 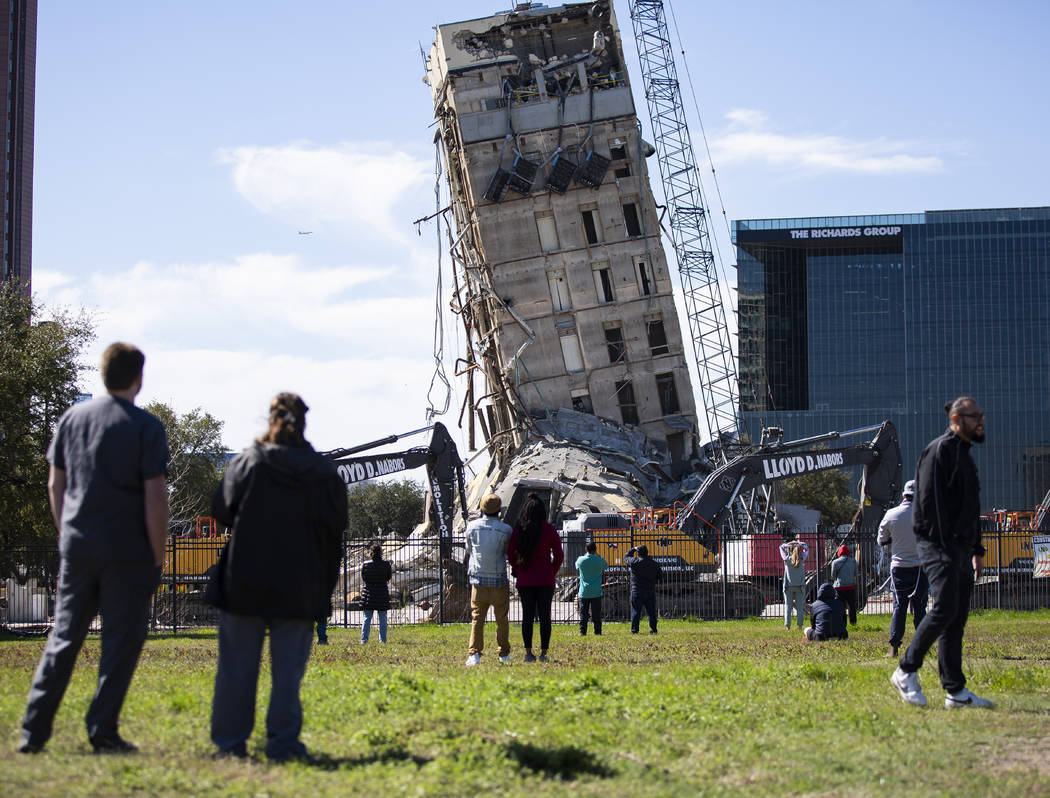 A crowd watches as Lloyd D. Nabors Demolition, LLC chips away at the top levels of the former Affiliated Computer Services building with a wrecking ball on Monday, Feb. 24, 2020 in Dallas. (Juan Figueroa/The Dallas Morning News via AP)

DALLAS — The “Leaning Tower of Dallas,” a social media sensation born when a part of a building survived implosion, endured hundreds of blows from a wrecking ball Monday.

Dozens of people gathered northeast of the Texas city’s downtown to watch as a crane was used to batter the former Affiliated Computer Services building.But the developer now says the demolition may take days.

The 11-story building found a second life online after surviving a first demolition attempt. It inspired jokes and comparisons to Italy’s Leaning Tower of Pisa when a Feb. 16 implosion failed to bring down its core.

The company that engineered the blast said some explosives did not go off. In the following week, people flocked to the site to post photos of themselves pretending to prop up the lopsided tower.

The remainder of the building proved resilient Monday, and some onlookers were nonplussed by the ball that began swinging around 9 a.m.

“They’re taking the wrecking ball and hitting the side of it over and over again, and it’s still just ineffective,” Shawn Graybill, a 24-year-old who lives nearby and came out in his pajamas to watch the demolition, said Monday morning. “It’s not knocking the tower down.”

Lloyd Nabors, whose company is handling the demolition, previously said the tower was leaning in the direction it was intended to fall, and there aren’t any safety concerns. The building is being demolished to make way for a $2.5 billion mixed-use project

A Friday statement from De La Vega Development suggested the demolition would be done by noon. But the the core of the tower, including the elevator shafts, was still standing in the late afternoon Monday, and a spokeswoman said the process is expected to take up to four days.

The wrecking crew is using a 5,600-pound ball and following “standard procedure” in starting at the top of the structure and working down, said Missy Wyszynski.

As demolition work took place, an online petition to “save this landmark from destruction” continued to draw signatures. Graybill said he hasn’t signed but plans to if the tower doesn’t tumble soon.

And as the effort to topple the structure stretched into thelate afternoon, people began to take another genre of photo — pretending to push the tower over rather than prop it up.