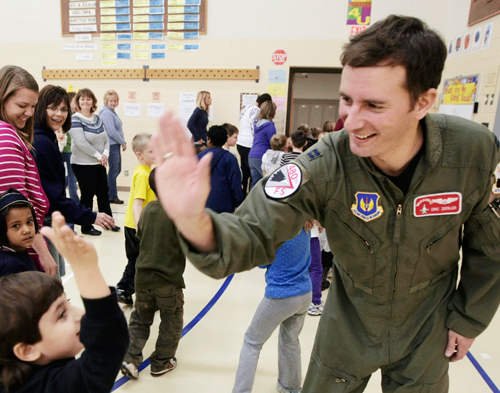 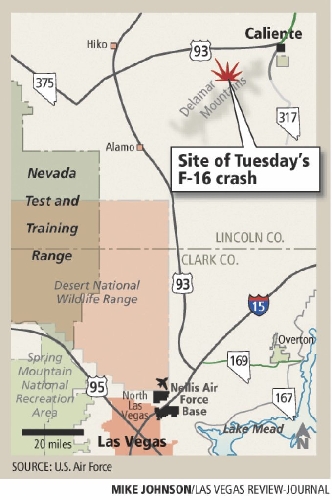 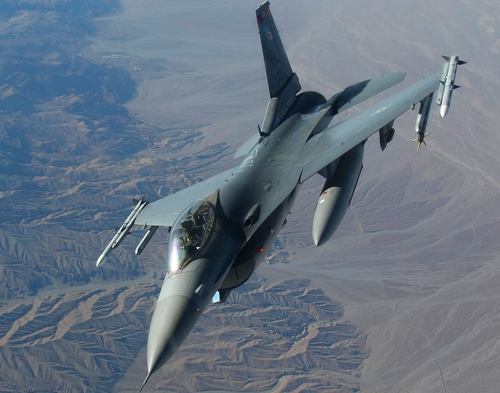 Air Force Capt. Eric Ziegler, the pilot of an F-16C fighter jet, died when his jet crashed Tuesday on public land outside the Nevada Test and Training Range, Nellis Air Force Base officials and sources in North Dakota said Thursday.

News of his death spread quickly through his hometown of West Fargo, N.D., where the 30-year-old Ziegler was a football star in high school. His death was confirmed by his West Fargo High School football coach, Jay Gibson.

Gibson, in a telephone interview with the Review-Journal, described Ziegler as a staunch competitor on the field and a model student in the classroom.

"He was a perfectionist. He did everything over the top. He played (defensive) back for us; he played wide receiver and all the special teams. We had to yank him off he field because he wanted to be in the game all the time," said Gibson, who taught Ziegler and his sister, Erin.

The football coach said he learned of Ziegler’s death from a text message received by his own son.

"Sometimes competitors are cranky," Gibson said. "He was very polite and respectful. Boy, he’s going to be really missed."

Ziegler was a graduate of West Fargo High School and helped guide his team to the 1999 state championship. The 2003 Air Force Academy graduate served tours in Iraq and came to Nellis last year after a three-year stint in Spangdahlen, Germany.

He is survived by his wife, Sarah, who works for the Air Force in Las Vegas, and 9-month-old daughter, Anna, The Forum newspaper of Fargo-Moorhead reported.

Gibson said the Air Force was a perfect fit for Ziegler because "when your players believe in what you say, they can do amazing things. And that’s what he did. Structure and following orders were built for him."

Conclusive evidence from the crash site confirmed the pilot did not survive when his jet slammed into the rugged terrain, 20 miles west of Caliente in Lincoln County.

Air Force officials, in keeping with the 24-hour protocol for notifying next of kin, were not releasing the pilot’s identity on Thursday.

While pathology tests continue, "based on evidence recovered from the crash site and after extensive aerial and ground search efforts, we know that the pilot did not eject from the aircraft prior to the impact," Brig. Gen. T.J. O’Shaughnessy, commander of the 57th Wing at Nellis, said in an announcement Thursday.

"Our thoughts and prayers are with the pilot’s immediate family, Air Force family, and friends during this difficult time."

O’Shaughnessy said an investigation into the accident is "in the very early stages."

"For the next several weeks, a trained investigation board will focus their exclusive efforts on collecting and protecting evidence from the scene and gathering and analyzing all relevant data with the specific purpose of determining the cause so we may prevent future mishaps," he said.

A third rescue helicopter was dispatched to the crash area Wednesday to continue the search for the pilot, which began at 5:30 p.m. Tuesday when the F-16C Fighting Falcon went down during a "dogfight."

The crash site is on rugged terrain owned by the Bureau of Land Management, about 150 miles north of Las Vegas. It is about 40 miles northeast of the boundaries of the Nevada Test and Training Range and about eight miles from the nearest road,

At a media briefing on the night of the crash, O’Shaughnessy said the accident occurred during a simulated dogfight between two aircraft during a combat training mission within the 12,000-square-mile operating airspace managed by the Test and Training Range.

The pilot was the only person in the aircraft. The search focused on the ejection seat parachute and the pilot.

O’Shaughnessy said the jet was not armed with live weaponry when it crashed and did not have an "active" locating device.

Jets such as F-16Cs are normally equipped with an ejection seat that has a built-in emergency locator transponder, as described in an Air Force fact sheet.

However, officials involved in the search did not detect a signal in the vicinity of the crash area.

A source familiar with the exercises said the canyon area where fighter pilots fly simulated combat missions has many rugged ravines.

The source, who spoke on condition he not be named, described the exercise as "dissimilar air combat tactics," a type of training that, in this case, pits different types of fighter jets against each other.

Nellis is the busiest flying base in Air Combat Command, producing 42,000 sorties each year. In addition to fighter pilot training, regular Red Flag and Green Flag air combat training exercises are conducted involving warplanes from bases within and outside the United States.

The F-16 Fighting Falcon flies at a maximum speed of about 1,500 mph. It is a fighter jet used by multiple Air Force squadrons, including the Thunderbirds air demonstration team, which is based at Nellis.

The last fatal crash during a combat exercise over the Nellis range complex occurred July 30, 2008, when Lt. Col. Thomas A. Bouley was killed when his F-15D Eagle fighter jet went down.