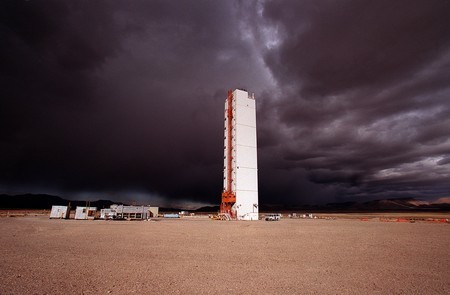 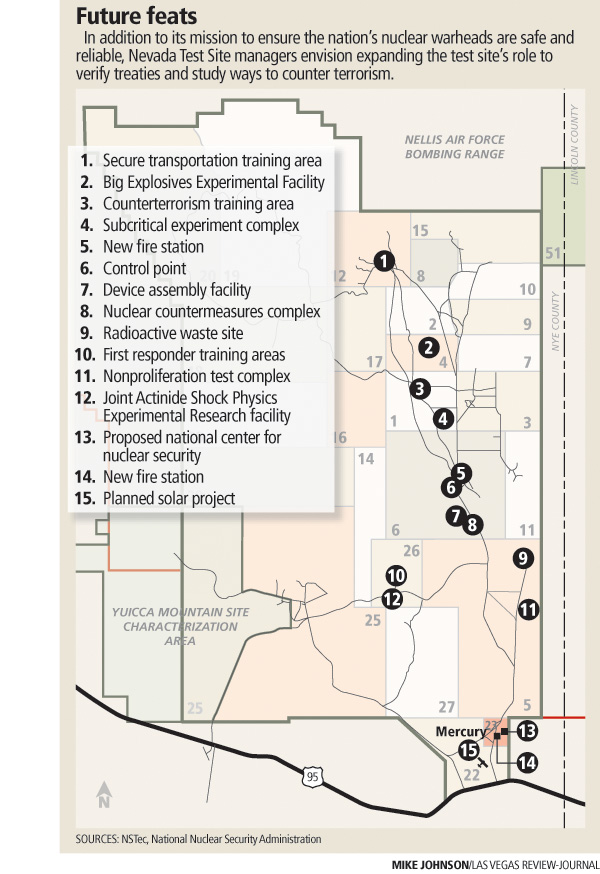 Managers of the Nevada Test Site are ready to write a new chapter in the history of the nation’s nuclear weapons proving grounds.

They hope the Rhode Island-size test site, 65 miles northwest of Las Vegas, will become home this fall to a new National Center for Nuclear Security, where experts on treaty verification, counterterrorism and nonproliferation will huddle to chart the nation’s course for achieving national goals.

The center "will probably be the biggest thing at the site in many decades," said Stephen M. Younger, president of National Security Technologies, NSTec, the managing and operating contractor at the Nevada Test Site.

Nevada Site Office Manager Stephen Mellington said the center will play a pivotal role in supporting arms reduction treaties and "other nonproliferation activities we’re going to be doing with the intelligence communities."

The test site has had a lengthy relationship with U.S. intelligence agencies, but the center will expand that role and extend it to the international community.

"We’re pretty excited about it," Mellington said. "The country is going to have to develop capabilities to ensure compliance with treaties."

As currently proposed, and with funding expected by the Department of Energy’s National Nuclear Security Administration, Younger said the center’s headquarters will be housed in existing facilities at the government town of Mercury.

It will augment the test site’s long-standing mission to check and certify that the U.S. nuclear weapons stockpile is safe and reliable.

"We’re broadening our portfolio," Younger said. "We’re looking to the future and saying ‘How can the advantages of the test site contribute to national priorities?’"

Among the chores scientists will tackle is developing countermeasures for nuclear terrorism.

They’ll also be engaged in helping the Pentagon’s effort to detect roadside bombs, and some other classified projects.

"How will you find these things? And if you find them, how can you attribute them to somebody?" Younger said about questions posed by the Department of Defense.

He was referring to being able to trace the devices to countries of origin once they’ve been detonated.

The test site has held a place in the nation’s nonproliferation efforts.

"We have a long history of being able to develop detectors and sensors. Other organizations develop them and bring them here to verify they work," said Darwin Morgan, spokesman for the National Nuclear Security Administration.

These include detectors designed to expose nuclear materials coming into the country from seaports, airports and border crossings. The detectors and sensors are used by the Department of Homeland Security, the Department of Energy and security agencies from other countries.

A secure building at the site, the Device Assembly Facility, will be used to train International Atomic Energy Agency inspectors on detecting nuclear material production.

Four "criticality machines" are in place to teach technicians how to go in and package materials, Morgan said. "And, they’ll make sure detectors are working the way they’re supposed to."

They need to know how to retrieve materials, pack them up and arrange them so the materials are not susceptible to erupting into a nuclear chain reaction.

Said Mellington: "As we go further into nonproliferation, the test site will start to have an international flavor."

From 1951 through 1992, the test site’s role focused on full-scale tests of nuclear weapons. During that time, 100 were conducted in the atmosphere until the Limited Test Ban Treaty took effect in 1963. That was followed by 828 that rumbled through the desert after they were set off below ground in shafts and tunnels. The last one, Divider, was conducted on Sept. 23, 1992. What followed was a moratorium that has been extended indefinitely.

Sixty-two of those full-scale tests involved simultaneous detonations, bringing the total number of devices set off to 1,021.

The stockpile stewardship mission now relies in part on studying how plutonium ages in the decades after weapons were produced.

A key tool in that task is the underground subcritical experiments complex, known as U1a. The array of chambers that extend off a deep shaft is where tiny amounts of plutonium are detonated but don’t erupt into nuclear chain reactions. In some experiments, data are captured in holographic images.

Three "subcrits," as scientists call such experiments, are planned for the fall. That will make 26 conducted since 1997 and the first since scientists from New Mexico’s Los Alamos National Laboratory conducted an experiment in August 2006.

Another physics tool is the JASPER gas gun facility, which opened in 2003 to fire projectiles at tiny discs of plutonium to understand how they blow apart. JASPER stands for Joint Actinide Shock Physics Experimental Research.

In the north central part of the test site, scientists use the Big Explosive Experimental Facility to study the role of high explosives used in nuclear weapons.

Troy Wade, a former Energy Department defense chief and chairman of the Atomic Testing Museum, said the idea behind the added responsibilities "is to change the mission of the test site such that it is up to date with the world’s and this country’s requirements."

"In many ways, what happens around the world is going to depend on arms control and disarmament. Because of its history, the Nevada Test Site is in a unique position to play a very strong leadership role in developing nonproliferation plans and testing them out."

With its central mission, a company, Johnson Controls, has proposed a 125-megawatt solar energy facility that will concentrate the sun’s rays on a receiver to generate power.

Younger said the test site will be explored for tapping geothermal energy.