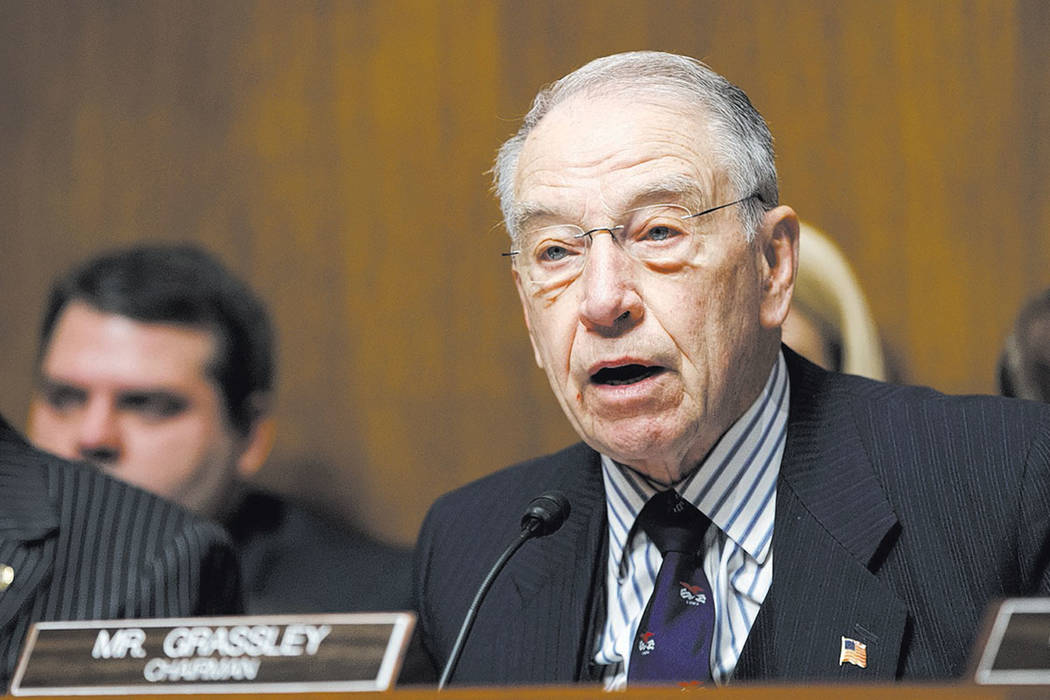 When bureaucrats waste federal dollars meant to help people save their homes, it makes me crazy.

And I’m not alone. U.S. Sen. Chuck Grassley, for one, also is upset.

Created in 2010, the program was supposed to take $9.6 billion in federal dollars and help people in danger of losing their homes. But when federal officials from the Special Inspector General for the Troubled Asset Relief Fund Program checked on whether there was waste, fraud and abuse in the program, they looked first at Nevada, the state hit hardest by the recession.

Management of the program was handed to a nonprofit — the Nevada Affordable Housing Assistance Corp. — with less than stellar results.

Employees were living high on the hog, a clearly irritated Grassley wrote in one letter to the Treasury Department.

The Iowa Republican and chairman of the Senate Judiciary Committee noted improper expenses charged included “a $500 per month car allowance for the CEO who drove a Mercedes Benz; $20,000 for a CEO’s severance package; over $15,000 for employee bonuses, gifts, holiday parties, manager outing at a high-end cocktail bar, gift cards and regular staff breakfasts and lunches; over $160,000 in block billed legal fees and cost for a private investigator, and nearly $40,000 for auditors to clean up the books; and more than $100,000 in moving fees, excessive rent and lawyers’ fees to move to a nicer office space only to break the lease to move out less than a year later.”

The waste in Nevada prompted audits of 18 other states and the District of Columbia.

The audit by the Special Inspector General for the Troubled Asset Relief Fund Program (SIGTARP) was released in September 2016 and Nevada was found to have wasted or abused a total of $8.2 million. When the Treasury Department later did its own audit, it required that $82,172 be reimbursed.

The head of the state Business and Industry at the time, Bruce Breslow, was livid. He’s now on the Public Utilities Commission, but at that time Breslow asked Attorney General Adam Laxalt to investigate. The response then from AG spokeswoman Monica Moazez was a tempered statement that the office would review the matter.

More than a year later, she emailed me, stating, “With respect to the Hardest Hit Fund, this matter remains with federal law enforcement, and the Attorney General’s Office stands ready to assist, if asked.”

No matter what the costs, Grassley wanted the wasted dollars returned to the Treasury Department.

In Nevada, “repayment” meant that money from one fund was moved to repay another fund in the same program.

The previous CEO, Michael Hanley, started in October 2014 and was terminated in May 2016, yet paid through July 2016. The nonprofit’s board has been replaced with one exception. Even the auditing firm has been changed, as well as the leadership team.

Grassley’s ire stemmed from the fact that money wasn’t reaching those in need. “After assistance to Nevada homeowners about to lose their houses ‘plummeted by 94%,’ the Treasury Department’s response was to issue a memo ‘expressing concern,’” he wrote. “Worse yet, the state non-profit administering the program ‘still had almost $100 million in unspent TARP (Troubled Asset Relief Program) funds available for struggling homeowners at the start of 2015, but provided less than 3 percent of that to homeowners.’”

On Oct. 31, the Treasury Department said it would get back to Grassley.

Verisa Campbell joined the nonprofit in June 2016 as chief operating officer and became the seventh CEO in March.

She said homeowners today are getting a higher percentage of funds. About $4.6 million was spent on programs last year, and and nearly $9.4 million this year, so more dollars are getting spent, which is the program’s goal.

I was unable to contact Hanley, as Campbell said she had no contact information for her predecessor.

“I took this job because I want to help and I believe in Nevada,” said Campbell, the former deputy director of Nevada’s Foreclosure Mediation Program.

“We know there’s such a great need and want to help as many people as we possibly can,” she said, mentioning a couple who both lost their jobs and then both got cancer as an example of those helped by the Nevada Hardest Hit Fund.

Nevada’s previous administrators deserve a wallop on the back of the head for their misdeeds, but other states have been shamed, too.

Who could ever imagine that using the Hardest Hit Fund for pay for a massage would pass the smell test? Or a $52,000 party?