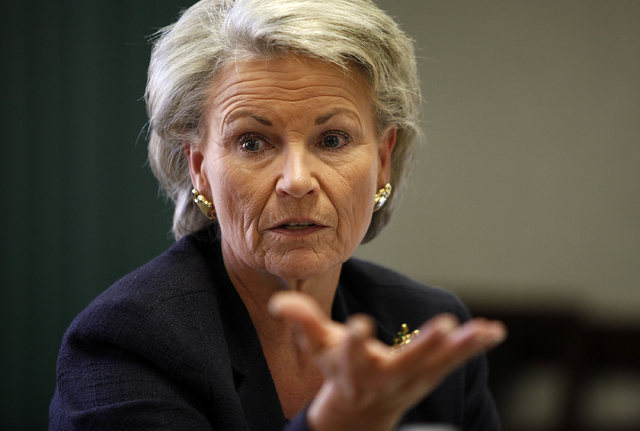 In 2004, water boss Pat Mulroy stood on the short list of women considered possibilities to become Nevada’s first female governor. She was praised for her administrative and communication skills. Her willingness to do battle was never in doubt. Even her detractors would never call her spineless.

She demonstrated her abilities to explain complex and confusing water issues Tuesday, the day after the news broke than she planned to retire from her dual jobs as general manager of the Southern Nevada Water Authority and the Las Vegas Valley Water District.

During Tuesday’s editorial board at the Las Vegas Review-Journal, I thought about the path not taken by Mulroy. She is an adept political animal, yet never ran for any office. As the woman who determined how to keep water flowing into Southern Nevada homes and businesses, her power was enormous and concentrated. She reported to boards of elected officials, but like many a strong CEO, she led and, most of the time, the electeds followed.

At that time, she said she hadn’t completed her job meeting Clark County’s short- and long-term water needs. Southern Nevada was (and still is) in a drought situation. She was also in the midst of a battle with Nevada Power Company, which the water authority once sought to take over.

Mulroy never stepped back from a fight, whether it was about needing to take water from the rural counties, building a third straw to Lake Mead or the generous salaries paid to top water officials. When it came to carving up Colorado River water, I was always glad Mulroy was fighting for Nevada’s interests.

Ultimately, she never ran for governor, and she grimaced Tuesday when I jokingly asked whether her retirement is precursor for a race next year. She’s not going there, though the Democrats are looking for someone to challenge GOP Gov. Brian Sandoval

She said that the time was right to step down from the two water bureaucracies and her decision was a combination of things. The personal aspect is that her husband has been ill. But she said it’s also just time. “You can’t do a job forever.”

But then she added, “I’ll not stop working.”

In the most effusive news release I’ve ever seen out of Senate Majority Leader Harry Reid’s office, he said, “Since 1989, Pat Mulroy has been an unparalleled leader in Nevada and nationally on managing our precious water supplies. Those of us who live in the Southwest know how important, and scarce, water is to our states. Pat has managed the Water District during one of the most difficult periods in Southern Nevada’s water history; she has been as important to Nevada as anyone in the last two decades. An example of her tremendous abilities, in 2002-2008 Southern Nevada actually cut its water usage while adding more than 400,000 people to our population. … She will surely be missed, but I am confident she will continue to lend her voice on issues facing Southern Nevada.”

Actually, that last sentence may not be true. Mulroy said she will not restrict her job search to Nevada, or even to the United States.

Even in 2004, Mulroy was upfront about her dream job: secretary of the Interior. But that never happened.