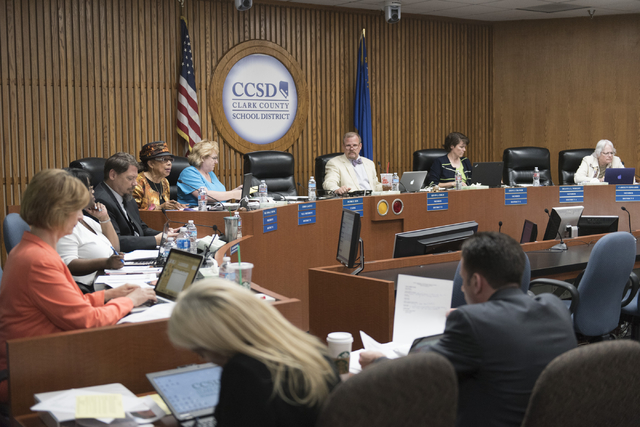 The Clark County School District Board of Trustees is seen during the CCSD board meeting to approve the district's final budget for the 2016-17 academic year at the Greer Education Center in Las Vegas Wednesday, May 18, 2016. (Jason Ogulnik/Las Vegas Review-Journal)

Do you know the name of your elected school board member? Do you remember who you voted for in the last Clark County School District race?

Regardless, a new bill seeks to change the makeup of school boards for Clark and Washoe counties — Nevada’s two biggest school districts.

In Clark County, the hybrid proposal would make four of seven members appointed by the county commission and the governing bodies of Las Vegas, Henderson and North Las Vegas. The remaining three would be elected countywide.

It’s a proposal that falls into a greater nationwide debate: whether to have elected or appointed boards.

At least 15 states have one or more districts with appointed school board members, according to data from the Education Commission of the States. Those districts are primarily located in urban areas.

Voter turnout is one argument in the case for appointed members. In non-presidential election years, do people care enough to vote?

Yet in Clark County, elections for four seats tend to occur in presidential election years. The result: a healthier turnout.

Take voter numbers for the only two contested races last November, for example. Voter turnout was about 82 percent in both District A and E, according to Clark County election data.

But then again, only about 74 to 76 percent of those who turned out actually cast votes in either of those races.

In 2014, outside a presidential year, turnout was significantly lower — it ranged from 30 to 41 percent for each of the three open seats. Once again, not all of those voters even cast a vote in the school race.

The bill obviously garners opposition from the Nevada Association of School Boards.

“I think that we have evidence that indicates that yes, individual constituents do know their local school board members and do turn out to vote,” said Dotty Merrill, the association’s executive director.

An elected board member is going to be more responsive to those that elect him, Merrill argued.

“Elected boards, we believe, keeps representation close to the people,” she said.

But one 2013 study from the Center for American Progress found that school boards appointed by mayors have generally seen improvement in district-wide performance over a decade.

Out of 11 urban districts that changed to some form of mayoral governance, five made substantial gains in narrowing the student achievement gap, the study found.

Brown University professor Kenneth Wong, co-author of the study, boils it down to a clear sense of accountability.

“In order to be able to get everybody on the same page, somebody has to be in charge,” he said. “When the mayor says that I’m in charge of education, everybody can hold the mayor accountable. And the mayor knows that his job is on the line.”

And turnout for a mayoral election, he argued, is usually more than that of a typical school board election.

Elected vs. appointed — it’s a debate that’s about to play out in the Nevada Legislature.

4
6-figure table game jackpots hit on, off the Strip