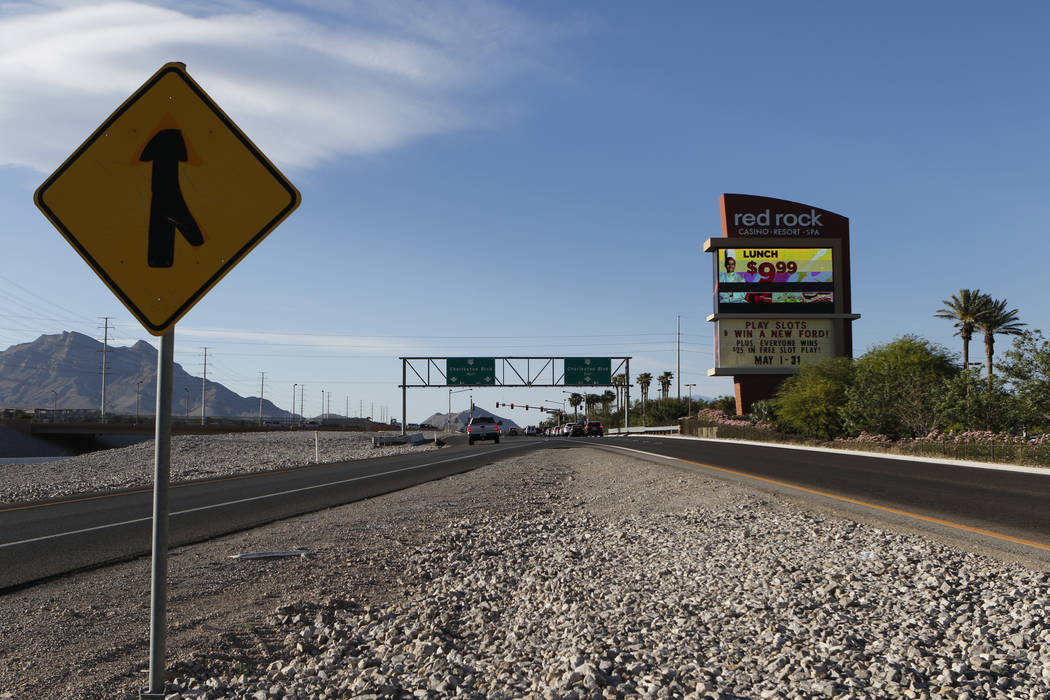 The intersection at Charleston Boulevard and 215 Beltway northbound in Las Vegas on Tuesday, May 12, 2017. (David Guzman/Las Vegas Review-Journal) @DavidGuzman1985

The 215 Beltway was never expected to make a complete ring around the Las Vegas Valley.

A few readers have emailed the Road Warrior noting that one-quarter of the circle of the Beltway is missing through the east end of the valley, in hopes of seeing a connection between Interstate 15 in North Las Vegas and U.S. Highway 95 in Henderson.

Clark County officials studied several route options for the Beltway during the late 1990s, but Kulin said that this particular segment was never designed nor formally planned. The missing link was always part of the plan — and still is.

“There would have been significant impacts on existing homes and businesses, as adding a highway through that area would have required a significant amount of eminent domain procedures,” Kulin said.

Construction on the first segment was completed in 2005, starting with the Town Center interchange and the Alta Drive bridge, according to the county’s website. The Nevada Department of Transportation also completed work that year on the interchange connecting the Beltway with U.S. Highway 95 in the valley’s southeast end.

Corner crosswalks are found at most intersections as a way to provide safe passage for people to get from one side of the street to the other.

Increasingly, we’re seeing crosswalks placed midblock and Marlene from Las Vegas wanted to know who has the right of way: pedestrians or vehicles?

The yellow flashing lights that usually accompany midblock crosswalks are considered to be “advisory,” aimed at warning drivers that someone is attempting to walk across the street, Nevada Highway Patrol Trooper Jason Buratczuk said. State law does not require pedestrians to push the button to activate a crosswalk advisory light.

“If a pedestrian is waiting at a crosswalk trying to cross, they have the right of way, and motorists must stop to allow the pedestrian to safely cross the road,” Buratczuk said.

Steve from Las Vegas noticed some tree branches are blocking a sign that warns drivers about an upcoming crosswalk in the 8200 block of Grand Canyon Drive, near a school bus stop.

“Young and old people have almost been run over here, especially because cars speed down the street,” Steve wrote in an email to the Road Warrior.

Thanks to your question, maintenance crews were dispatched to make sure trees are not obstructing any warning signs near this crosswalk, Las Vegas city spokeswoman Margaret Kurtz said. Additional warning signs are going up nearby.

Because of frequent changes in school bus stop locations, Kurtz said that “it is not feasible to install permanent flashers.” School buses are already equipped with flashing lights that require drivers to come to a complete stop when children are crossing the street.

Stan wanted to know what types of improvements to expect along Starr Avenue, between Bermuda Road and St. Rose Parkway in Henderson, and when construction will wrap up.

The road closure should have been lifted Friday, with most of the work scheduled for completion by mid-November, Henderson city spokeswoman Kim Becker said. Crews are making some intersection modifications, along with installing underground wiring for traffic signals and streetlights. Paving should begin Oct. 9 and be completed within a couple of weeks.

No right of way

Geraldo from North Las Vegas wanted to know why concrete barriers are closing off access between Pecos and Washburn roads, especially given the proximity to Shadow Creek Golf Course and surrounding housing developments.

It turns out the city doesn’t own the right of way for the eastern half of Washburn along a few of the parcels in this area, North Las Vegas city spokeswoman Delen Goldberg said. Without that right of way, you and I can’t access that part of the road.