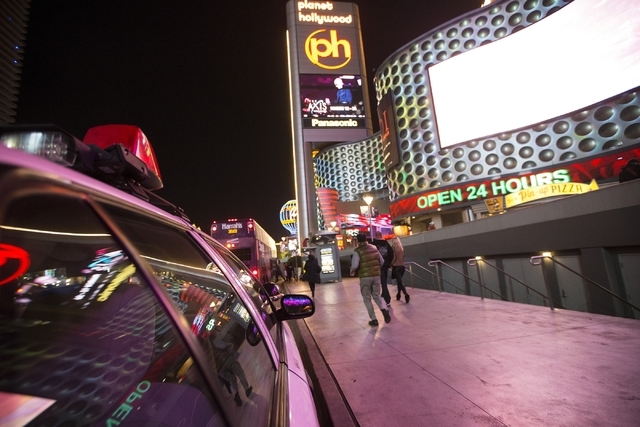 When you’re new to Las Vegas, you might not be familiar with some of the road rules that many of us take for granted.

But every once in awhile, there are newbies who reach out for information such as Warrior reader Ben, the first reader ever to address me as “Bro”:

“I’m moving to Vegas soon and was wondering if you could tell me if I could ride my bicycle on the sidewalk on the Strip. Fremont? This is going to be my first time there and don’t want to get in trouble.

“Also, I have a small trailer attached in which I carry my dog so I want to keep him safe as well. Also, I am aware that dogs are only allowed on the Strip between 5 a.m. and noon, but do you think I’d get hassled if I kept him in my trailer? It’s enclosed with mesh screen windows all around.

A complicated question, Ben, because this involves multiple jurisdictions. First, don’t ever think you’re in Las Vegas when on the Strip. You’re in Clark County. At least that’s what the Clark County government people constantly remind us.

First, the Strip. Riding a bicycle on Strip sidewalks is illegal. It’s also pretty dangerous since at many locations it’s filled with pedestrians.

As a side note, the time frame you referenced regarding animals on the Strip is accurate, but there are other details you should be aware of.

A county ordinance says, “Animals are not be allowed in the restricted area of Las Vegas Boulevard South, except for exempted animals and as otherwise provided in this chapter.” Those exemptions include service animals as defined by the Americans With Disabilities Act or if enabled by a special notice, such as a parade permit.

Household pets are allowed between 5 a.m. and noon, but must be restrained on a leash no more than 3 feet long.

And keep your python at home. No snakes longer than 2 feet are allowed at any time.

Service animals are allowed, but they can’t be transported in a trailer since bicycles are banned.

Signs are posted on Fremont between Main Street and Seventh Street prohibiting bicycles on the sidewalks.

A draft amendment to this code is being considered to revise that bikes are “not allowed to exceed 5 mph when being ridden on a sidewalk.”

With the weather warming up, next week is filled with special outdoor events that should draw crowds and temporarily disrupt traffic.

It’s no April Fool’s joke that Friday is going to be filled with activity in various corners of the valley.

Watch for congestion at the MGM Festival Grounds at Las Vegas Boulevard and Sahara Avenue with the Academy of Country Music Party for a Cause country music festival Friday through Sunday.

Activity kicks off Friday at 3 p.m. and runs through midnight and it will be active from noon to midnight Saturday and noon to 9 p.m. Sunday. Headliners include Carrie Underwood, Dierks Bentley and Kenny Chesney so expect big crowds at the open and close.

Also Friday: the second of two Big League Weekend baseball games at Cashman Field. The Friday game first pitch is at 1:05 p.m., so look for streets to begin filling up in the area around noon with people leaving around 3 and 4 p.m.

The first game is Thursday at 5:05 p.m., so look for rush-hour traffic to be a little more intense around the Spaghetti Bowl that day.

Both games feature the New York Mets and the Chicago Cubs, two popular draws that played for the National League pennant last year.

And one more April 1 event: It’s First Friday, so all the usual downtown arts locales will be busier than normal.

In conjunction with First Friday this year is the burning of the Life Cube downtown Saturday night. Flames are expected to light up the sky around 10 p.m., but there should be activity and some road closures on Fremont Street between Ninth and 10th streets most of the day Saturday.