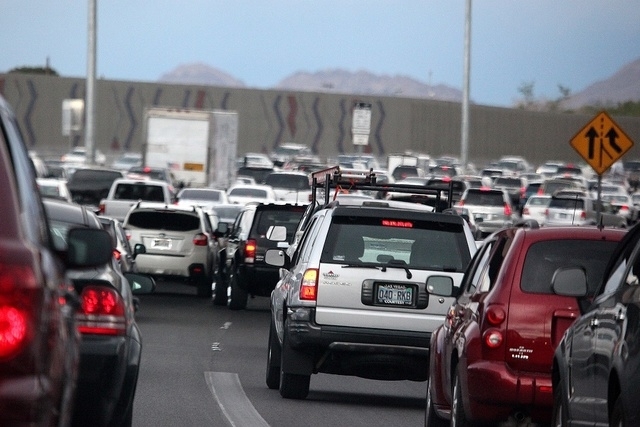 If you’re a commuter who uses southbound Interstate 15 to get to work in the morning, begin planning an alternate route now.

You will thank me June 22 when it’s a lead-pipe cinch that I-15 is going to turn into a slow-moving parking lot.

Why? The Electric Daisy Carnival. The electronic music festival that resembles a large Halloween party on steroids, bringing thousands of people to Southern Nevada, is coming to town.

It’s not that the ingress and egress to and from the Las Vegas Motor Speedway will be any better on the other nights of the festival running Friday, Saturday and Sunday from dusk to dawn.

It’s just that Saturday and Sunday morning traffic isn’t as heavy or as stressful as the typical Monday-morning Vegas commute.

You can count on heavy traffic just after the Friday evening commute on northbound I-15 from about Cheyenne Avenue to the Speedway Boulevard exit. It’ll also be pretty packed northbound Saturday and Sunday night, too.

But the traffic patterns observed in the four years Las Vegas has hosted EDC has shown that the going in isn’t as rough as the exit. That’s because carnival-goers tend to space out their arrival times a little more because of preference to a particular performer or plans to go to clubs or other parties before getting to the speedway venue.

But leaving is a different story.

While there are some party poopers who will leave the grounds at 3 or 4 a.m., most will wait until the crack of dawn.

That is when the freeway will fill up with motorists who have been awake for 24 hours straight, in clothing not suitable for driving, in cars that have signs and drawings painted on car windows that limit views. And there might be one or two who have ingested substances that will impair their driving skills.

That’s why Monday morning particularly is a good time to get out of the way.

A number of festival-goers no doubt will continue the journey through town and continue on to Southern California where most of EDCers come from. Be alert. Stay defensive.

Of course, not every carnival attendee will be driving, and that’s a good thing. Some will be on shuttle buses or in taxis that have a designated route that will take them through Nellis Air Force Base. That, incidentally, is a tremendous gesture by the base to help the transportation industry manage such a huge crowd, expected this year to be in the neighborhood of 140,000 a night.

Some of the EDC elite will be arriving by Maverick Aviation helicopters, which would be my personal favorite way of getting there should I scare up a ticket.

Bryan Kroten, vice president of marketing for Maverick, said his company will devote 15 helicopters to the airlift each night with a trip to or from the track taking about 15 minutes. Prices start at $800 a seat round trip, $500 one way.

There are even a few folks in town who have talked about developing some kind of train shuttle between the city and Las Vegas Motor Speedway for EDC and NASCAR races. God bless them if they can figure out a way to persuade Union Pacific to allow that to happen.

Multiple options to get in and out of big events like EDC would keep us all safer.

Far be it from me to advocate going out and getting blasted at a local watering hole.

But at least soon, there might be a service available to not only hail a ride home but an extra driver to get your car home as well.

Evan Stafford, the founder of Blaxi, tells the story of how his circle of friends was devastated by the news that one of their buddies was arrested for driving under the influence.

“We decided something had to be done to promote safe driving and help alleviate the drunk driving epidemic,” Stafford said. “We know lots of people drink and drive, and this is our way of saying no more excuses.”

To expand Blaxi into a national company, founders opted to initiate a crowdfunding campaign. In Los Angeles, Blaxi is running an Indiegogo effort to raise $50,000 by July 9 by offering the preorder of service for $25 a ride.

Once the company is funded, Stafford plans to expand it to every major city in the United States. Company officials are hoping to have it in Southern Nevada by late July or August.

Here’s how it works: Customers must first download the Blaxi smartphone application to their phones. Company officials say for now, it’s only available through the Apple store for iPhones, but the company is working on an Android version. But some of my iPhone friends weren’t having much success finding it.

In screen saves, it looks a lot like some of the traditional ride-share apps I’ve seen, but it also includes photos of the driver, the follow car’s driver and the vehicle arriving to pick up the customer.

Company representatives say the two Blaxi drivers will arrive within 10 to 15 minutes and the average cost of a 10-mile trip would be $29.50, which is much cheaper than a DUI ticket, I’m told. Blaxi charges riders based on mileage, and prices are comparable to other ride-hailing services.

Blaxi rides can be scheduled up to six hours in advance of a trip or in real time.

Every ground transportation company seems to need some identifying signature. Taxis are plastered with advertisements, rates and identification numbers; Lyft has its pink “glowstache,” the lighted pink mustache on the dash that has replaced the pink mustache mounted in the grill.

Stafford said the name “Blaxi” is a blend of “blacked out” and “taxi.” Could have fooled me — I would have thought “blasted” and “taxi.”

Company officials plan to take it to the Nevada Transportation Authority for licensing when it’s ready.

I’ll keep you informed about Blaxi’s entry into the Southern Nevada market and might try a road test once it’s arrived — just as long as someone else is picking up the tab on the drinks.