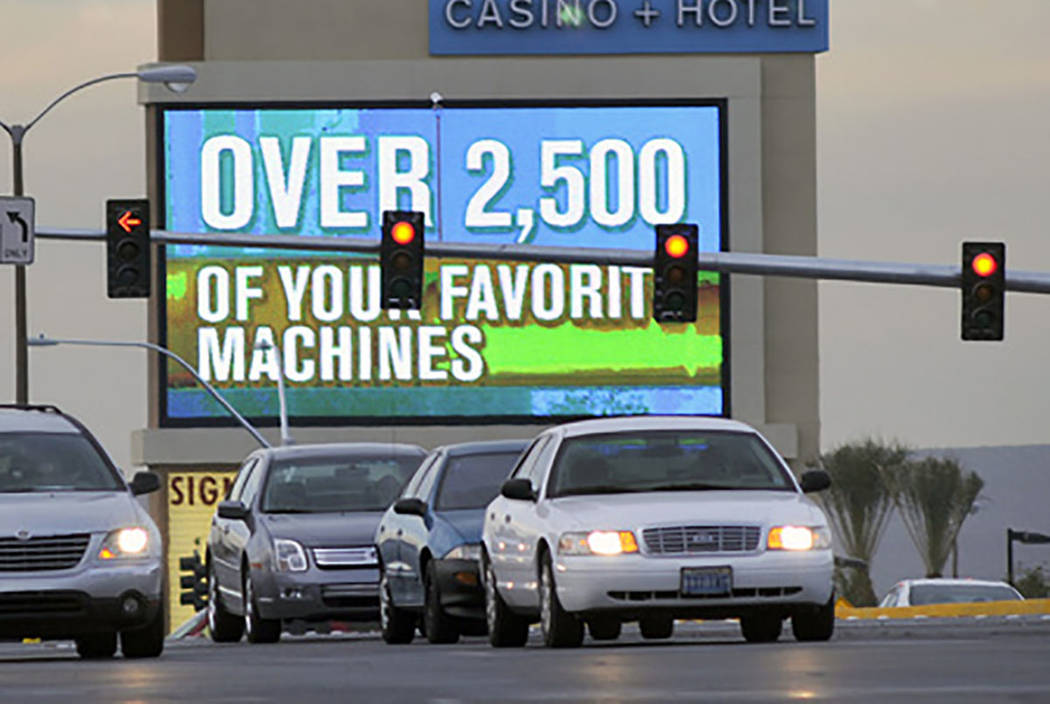 Cars line up at a traffic signal at Aliante Parkway and the 215 Beltway in 2008. (Las Vegas Review-Journal)

Traffic signals seem to take an awfully long time to change at some of the busiest intersections across the Las Vegas Valley.

Some streets get more “green time” than others. A few left-turn signals allow only a few vehicles to pass at a given time. Frustration often ensues.

A few of you have asked how traffic signals work, and what exactly triggers that green light?

Usually, it’s all about timing, according to Catherine Lu, a spokeswoman for the Regional Transportation Commission of Southern Nevada.

“The timing of traffic signals across the valley are pre-programmed based on the time of day, the day of the week and travel demand at intersection locations,” Lu said.

Of course, signal timing may be adjusted with the following exceptions:

■ Pedestrians who trigger the “walk” signal at busy intersections, which usually leads to an extended green light for vehicles traveling in the same direction, allowing enough time for the pedestrian to safely get across the street.

■ Fire trucks, police cruisers and other public-sector emergency response vehicles are equipped with special sensors that communicate with traffic signals, allowing for a green light as first responders approach the intersection.

Drivers who spot problems with traffic signals or have concerns about timing can file a report with the RTC’s “Seeing Orange” campaign at 702-928-2663 or seeingorangenv.com.

Peggy from Las Vegas wanted to know when road construction will wrap up on Stewart Avenue between Mojave and Sandhill roads just east of downtown.

Construction started in May on a sewer rehabilitation project along Stewart, resulting in the loss of some traffic lanes in between Sandhill and U.S. Highway 95, Las Vegas city spokeswoman Margaret Kurtz said. The work is expected to wrap up in January.

“Although it may appear that there is no work occurring at the street level, the sewer bypass is active in this area so we are able to proceed with our underground pipe lining project,” Kurtz said.

Jay from Las Vegas noticed that the white limit lines have pretty much disappeared on the westbound Spring Mountain Road onramps and offramps at Interstate 15 in Spring Valley.

Without the limit lines, Jay noted that “people can accidentally end up in the middle of the intersection.”

Tony Illia, a spokesman for the Nevada Department of Transportation, said that road crews will take a look and make the necessary improvements to keep the intersection safe.

Stacy from Henderson wanted to know why the city won’t install a flashing yellow left-turn arrow that would allow drivers to yield before turning left from westbound Horizon Ridge Parkway onto Stephanie Street.

Kathleen Richards, a spokeswoman for the city of Henderson, said that the intersection’s configuration with dual-left turn lanes makes it difficult for motorists to see and yield for oncoming traffic. Dual left-turn lanes typically have protected arrows, while the flashing yellow arrows are reserved for single left-turn lanes.

Glen wanted to know why the speed limit is 35 mph along Silverado Ranch Road between Interstate 15 and Decatur Boulevard in the southwest end of the valley. With few houses and empty lots, Glen believes motorists should be allowed to drive faster on this stretch of road.

“With all that open space, why was only one lane built in each direction with a large center lane?” Glen asked.

Clark County spokesman Dan Kulin said the speed limit will be reviewed in 2020, when county officials start designing a series of road improvements for a larger section of Silverado Ranch between Dean Martin Road and Jones Boulevard.

Don from Las Vegas wanted to know whether county officials plan to install a left-turn signal for drivers on McLeod Drive who are waiting to turn left onto Flamingo Road.

“Right now, traffic backs up because there is not a protected arrow to make the turn, and it’s a long cycle to wait for,” Don said.

Kulin, the county spokesman, said a set of flashing yellow left-turn arrows are planned for Flamingo and McLeod, but it was unclear when those special signals will be installed.