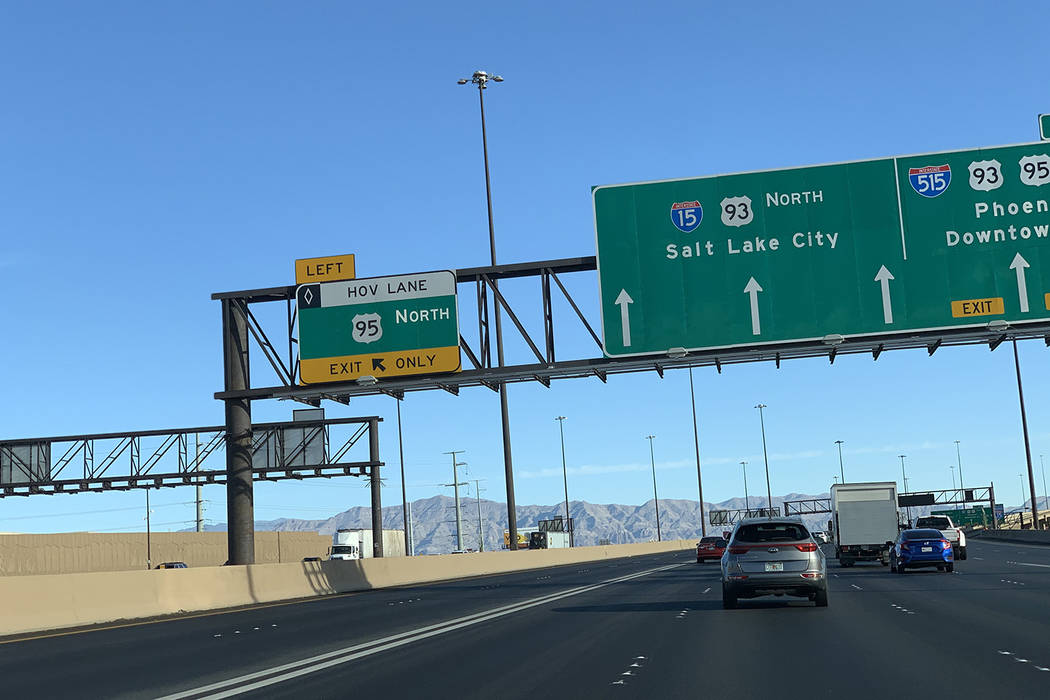 One of the biggest gripes since Project Neon’s completion and the introduction of the 22 miles of HOV lanes—aside from them being in existence at all—is the spacing of the entry exit points for the lanes. (Mick Akers/ Las Vegas Review-Journal)

Project Neon, the $1 billion multiyear road project, has already left a lasting legacy on Las Vegas with the extension and change of regulation of the carpool lane system stretching across Interstate 15 and U.S. Highway 95.

One of the biggest gripes since Project Neon’s completion and the introduction of the 22 miles of HOV lanes — aside from them being in existence at all — is the spacing of the entry/exit points for the lanes.

Bob Fisher, one of dozens of Las Vegas residents who’ve chimed in to the Road Warrior about the lanes, said the spacing doesn’t work well for motorists coming from the northwest valley who use U.S. 95 to get to work at Wynn, Encore, The Venetian, Palazzo, Mirage, Treasure Island, Fashion Show mall or Harrah’s. He said those motorists cannot use the carpool lane because there is no exit lane to Spring Mountain from the HOV flyover ramp.

“Coming in from U.S. 95 on the west side and using the Spaghetti Bowl flyover, there is no exit from the HOV lanes on I-15 until Flamingo (Road),” Fisher said.

Although there are no immediate plans to change the entry/exit points on the HOV lanes, the Nevada Department of Transportation is paying attention to public feedback. Tony Illia, the transportation department spokesman, said NDOT is evaluating and soliciting feedback about the system’s entrance and exit points.

Similar complaints have been heard from carpool lane users traveling on the HOV flyover ramp from I-15 northbound to U.S. 95 northbound who want access to Rancho Drive.

“The first HOV access opening along northbound U.S. 95, west of Rancho lies between Valley View and Decatur boulevards, which is less than one mile away from the Rancho Drive onramp,” Illia said. “If the first exit was closer it would be too close to the system-to-system flyover connection ramp from I-15, thereby making it dangerous for vehicles exiting at Decatur Boulevard.”

The HOV lanes along U.S. 95 start and end at the I-15 HOV direct ramp connector, with restricted access locations designed to accommodate the on- and off-ramps located both up and downstream from the interchanges.

The current HOV entrances and exits are based on spacing needs between interchanges that provide the optimal distance to safely accommodate merge-and-weave movements, avoiding conflicts with general lane ingress and egress while still maximizing traffic flows, Illia said.

There are no specific distances required between entry/exit points, but NDOT adheres to federally adopted design principles to ensure the safest, most efficient flow of traffic, he added.

Changing the entry/exit points would be no simple task, as a detailed process with historical data of HOV lane traffic patterns would be involved. With the new HOV lane system only a few months old, that likely won’t occur anytime soon.

“The HOV lanes are still in their infancy. As such, it will be some time before any meaningful data emerges that paints a clear picture of motorist usage and driver behavior,” Illia said.

With the HOV lane system still new for the Las Vegas Valley, the Department of Transportation hopes drivers will grow accustomed to the lanes, but it welcomes any suggestions on ways to improve the lanes, Illia said.

“The introduction of an HOV network is still new for many motorists, requiring a period of orientation and acclimation,” he said. “As such, we will continue to evaluate usage patterns, including signage, entrances and exits, best determining the most effective flows for commuter traffic, making any future adjustments as needed.”