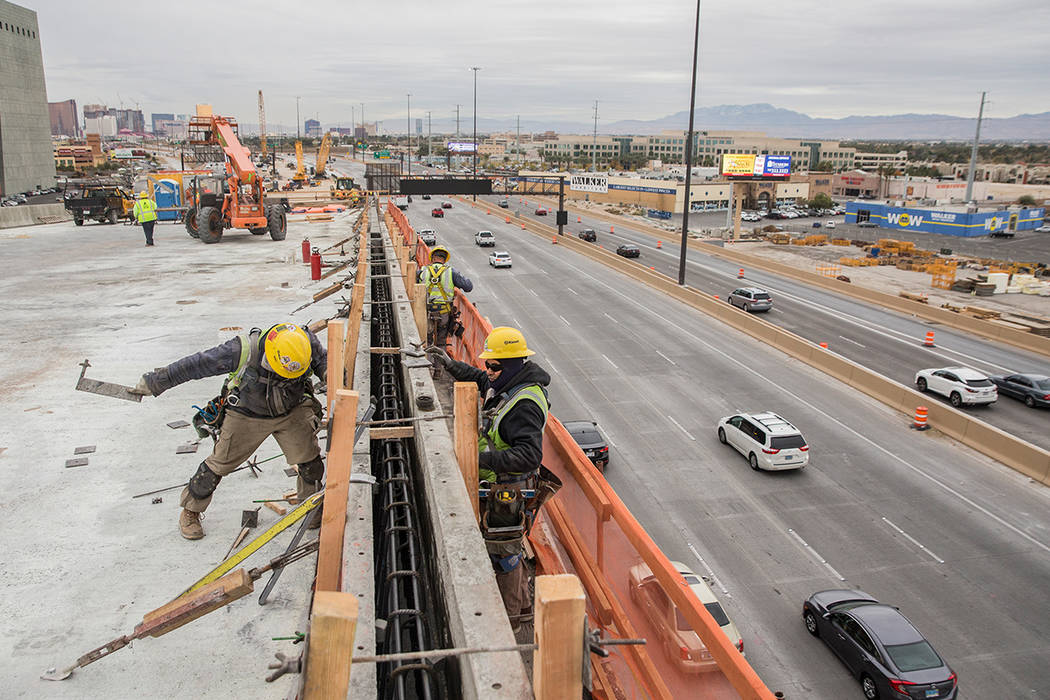 Construction continues on the HOV ramp in the Spaghetti Bowl as part of Project Neon on Wednesday, Dec. 5, 2018, in Las Vegas. (Benjamin Hager/Las Vegas Review-Journal)

If there was ever a reason for Southern Nevada commuters to celebrate, this is it.

After almost three years of gridlock, confusion and road closures, the “grand finale” of Project Neon, the largest public works project in Nevada history, is set to come early.

The nearly $1 billion 4-mile widening of Interstate 15 from the Spaghetti Bowl to Sahara Avenue is set for substantial completion May 16, a full two months ahead of schedule.

A much-deserved celebration ceremony featuring refreshments, music and entertainment is slated for that evening, cementing the importance of this project.

The good news of an early finish is due to the steady, hard work of the project contractor, Kiewit, and planning by all involved, according to Tony Illia, spokesman for the Nevada Department of Transportation.

“A potential early completion can be attributed to efficient management of resources, including diligent scheduling that ensures critical work components are prioritized,” Illia said.

Aside from the widening, the project includes new high-occupancy-vehicle lanes, improved on-ramps and offramps, new freeway offramps and improved connectivity on surface streets surrounding the project in the downtown Las Vegas area.

As Project Neon is soon set to be in NDOT’s rearview mirror, the department has a number of major projects lined up, including a trio of projects totaling nearly $400 million, so there will be plenty of topics for readers to sound off about.

“Although Project Neon marks the biggest undertaking in the department’s 102-year history, several additional large-scale programs are already underway. These projects are all geared toward improving safety and mobility for Southern Nevadans.”

Motorists in the northwest valley are set to be affected by planned freeway lane closures in the area.

The U.S. Highway 95 northbound ramp to the 215 Beltway eastbound will be shut to traffic from 8:30 p.m. to 5 a.m. from Sunday until Thursday, NDOT announced last week.

The temporary closures are needed for roadway excavation and a future ramp widening as part of the $73 million next phase of the Centennial Bowl interchange.

Over 107,500 vehicles travel the ramps daily, with that number expected to grow, according to Illia.

The project is slated for completion in the spring of 2021.

People are running out of time to air their opinions on Maryland Parkway’s transportation future.

Five public meetings were held last month. Residents have until Thursday to submit their feedback on three proposed options for the 8.7-mile route, which leads to downtown and then to the Medical District.

The three options being considered by the Regional Transportation Commission of Southern Nevada are light rail, with a $750 million projected cost; bus rapid transit, estimated to cost $335 million; and enhancement of route 109 at a cost of $29 million.

Interested parties can submit feedback to the RTC via email at onboardsnv@rtcsnv.com, by fax at 702-676-1589 or by mail to ATTN: Maryland Parkway transportation project, RTC of Southern Nevada, 600 S. Grand Central Pkwy., Suite 350, Las Vegas, NV 89106.