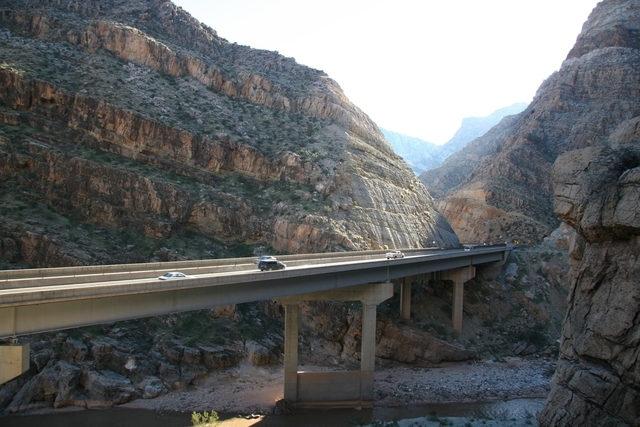 Virgin River Bridge No. 6 will be rehabilitated in a two-year, $27 million project. (Courtesy of Arizona Department of Transportation)

At one time or another, most motorists have faced this dilemma: When can we make our right turn when pedestrians are present in a crosswalk?

With the alarming increase in the number of vehicle-pedestrian accidents in Southern Nevada over the past two years, it’s important for motorists to know the rules of the road when people in cars meet people on foot. State law enforcement agencies said 227 pedestrians lost their lives and 881 were severely injured on Nevada roadways between 2007 and 2011. But here’s the alarming part: The death toll has been rising steadily, with 36 pedestrian deaths in 2009, 40 in 2010, 43 in 2011 and 58 in 2012.

“I am at an intersection with traffic lights, and I am in the right-turn lane. My light turns green for me to proceed. There is a pedestrian crossing the street as well and has the “walk” signal, so of course I yield to the pedestrian and wait for him to cross the street before I turn.

Am I supposed to wait until the pedestrian is completely out of the crosswalk before I can turn (i.e. completely crossed the street and on the sidewalk)? Or may I proceed as soon as the pedestrian has safely cleared my path?”

Nevada Highway Patrol trooper Loy Hixon has some great rule-of-thumb tips on how to handle this gray area.

How a motorist addresses the situation depends a lot on the characteristics of the intersection, Hixon said. The general rule of thumb is if there’s a median or some form of physical separation on the street, a motorist should wait until the pedestrian reaches that point before turning.

In other words, if the motorist is making a right turn and pedestrians are crossing in the motorist’s path, wait until they have reached the median before proceeding.

If pedestrians are crossing from the opposite side of the street, it’s all right to proceed as long as they haven’t reached the median. But once they get there, yield the right of way to those on foot.

Hixon said the same rules apply for crosswalks on streets on which motorists must stop. There are a couple of these on Maryland Parkway at the University of Nevada, Las Vegas, and it’s always a good idea to come to a complete stop before proceeding, especially since there could be pedestrians crossing from either side of the street.

If there’s no median or dividing line on the street, it’s a new ballgame.

Hixon said motorists should be more vigilant in making the correct decision of whether to wait or proceed. A good rule of thumb in that case: Make sure the pedestrian has reached the sidewalk before proceeding.

One more thing from the motorist’s perspective, pedestrians. You’re not a fashion model on “Project Runway.” A crosswalk is no place to saunter. Give those behind the wheel a break and put some hustle in your step because we’re the ones who are getting car horns from behind from motorists who can’t see you in the intersection.

Warrior Reader Jerry asks: “Some time back, the Road Warrior wrote about a Regional Transportation Commission transient terminal at 6675 Gilespie St. The column said there was free parking and that Route 109 North goes to the airport 24 hours a day and takes less than 10 minutes.

“On the RTC website, I could find no such route. Was the route discontinued or am I doing something wrong?”

Well, Jerry, it sounds like maybe you, in fact, did something wrong.

From the RTC: “Transit Route 109 still operates daily with service to the South Strip Transit Terminal and McCarran International Airport. Information on the route can be found by visiting the RTC’s website at www.rtcsnv.com, selecting the ‘Transit’ icon and then choosing ‘Maps, schedules and detours.’ From there the reader will find information on all of the RTC routes, including the 109 Maryland Parkway. Passengers heading to McCarran can park their vehicle for free at the South Strip Transit Terminal Park and Ride, at 6675 S. Gilespie St. Passengers then can hop on Route 109 North, which operates 24 hours a day, for the quick 10-minute ride to McCarran. The $2 fare can be paid on the bus with exact change.”

The Arizona Department of Transportation announced that the next phase of construction in its overhaul of Interstate 15 through the Virgin River Gorge begins this week with the replacement of Virgin River Bridge No. 6 at milepost 16, 20 miles south of St. George.

Traffic will be reduced to one lane in each direction beginning Tuesday for the $27 million project.

Road crews already are working on Bridges 2, 3 and 7 and ultimately, eight bridges in seven locations will have lane reductions.

Earlier in the month, I-15 was shut down for half a day after an accident in one of the construction zones.

Arizona transportation officials suggest slowing down and allowing extra time for trips through the gorge.

If you have a question, tip or tirade, send an email to roadwarrior@reviewjournal.com. Follow the Road Warrior on Twitter @RJroadwarrior.