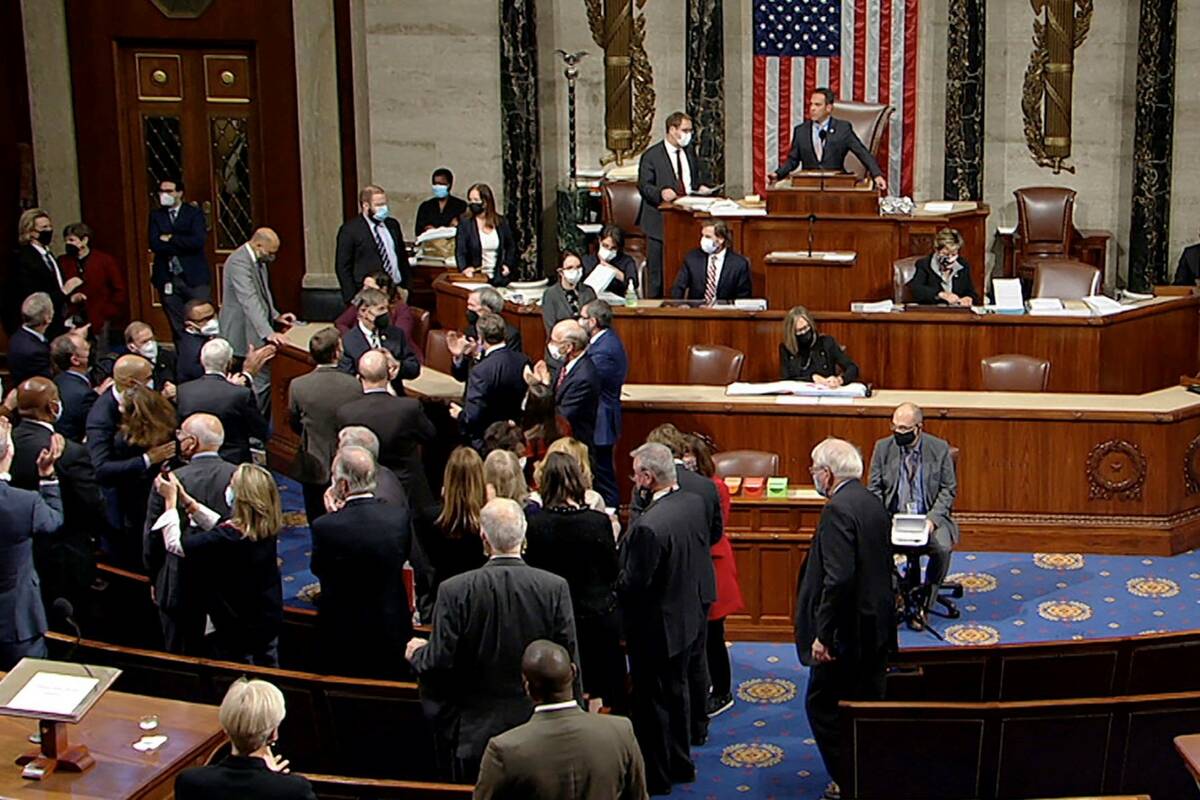 Democrats celebrate on the House floor late Friday, Nov. 5, 2021, in Washington, after the House approved a $1 trillion package of road and other infrastructure projects after Democrats resolved a months-long standoff between progressives and moderates, notching a victory that President Joe Biden and his party had become increasingly anxious to claim. (House Television via AP)

The victory was sealed after liberals and conservative Democrats reached a late-night agreement to support the two bills after weeks of wrangling over the cost and scope of social programs.

House Speaker Nancy Pelosi, D-Calif., after meeting with lawmakers, brokered the deal that allowed passage of the $1.2 trillion infrastructure bill and an agreement to begin debate on a companion $1.85 trillion social spending package. A vote on that bill is expected in two weeks.

Pelosi called the action a “path forward for the American people.”

They threatened to withhold their approval of the smaller road bill with project funding for every state, including $4 billion for Nevada.

“If our six colleagues still want to wait for a CBO score, we would agree to give them that time — after which point we can vote on both bills together,” said Rep. Pramila Jayapal, D-Wash., chair of the Congressional Progressive Caucus.

Pelosi helped patch up differences during the day and acknowledged the difficulty in a letter to colleagues.

“The agenda that we are advancing is transformative and historic, hence challenging,” Pelosi told colleagues in a letter.

Biden canceled a weekend trip to Delaware, stayed at the White House and made a conference call to a progressive caucus meeting at the House Longworth Office Building.

Still, the social spending package faces hurdles in the 50-50 Senate, where Democrats can’t afford a defection among their ranks because of united opposition by Republicans, who call the legislation a handout to special-interest groups and Democratic donors.

House Minority Leader Kevin McCarthy, R-Calif., accused Democrats of holding “rushed and irresponsible” actions. He disputed Democratic claims that the cost of the social spending package would be offset by tax revenue.

He said that budget tactics and lifting the cap for the state and local tax deduction, which Republicans say benefits high earners in mostly East and West coast states, would raise the cost of the bill to $4 trillion. McCarthy cited analysis by the Wharton School at the University of Pennsylvania.

Nevada is one of the 10 states that receive the least benefit from the current cap. Lifting it would amount to a tax break for millionaires and billionaires, mainly in high-tax states, critics say.

But the victory on the $1.2 trillion bipartisan infrastructure bill will bring roughly $4 billion in spending to Nevada for highways, bridges, airports, water projects, wildfire detection and expanded access to internet broadband.

The bill cleared the Senate on a bipartisan vote this year and was endorsed by trade unions, chambers of commerce and local leaders in every state expected to receive a portion of funding.

The bill would provide Nevada $2.5 billion for highway projects, including improvements and construction on Interstates 15 and 11. Specific project funding would be determined by the Nevada Department of Transportation, a spokesman said.

The state would see $225 million for bridge repairs and $459 million for public transportation projects, according to the White House.

About $100 million would be made available to Nevada to expand broadband internet access, according to Sen. Jacky Rosen, D-Nev., who helped write that part of the legislation.

Water systems that include a recycling plant would see $400 million in federal money. That project was slipped into the bill by Sen. Catherine Cortez Masto, D-Nev., and Lee, who sought the funds in the House.

The state would see roughly $293 million to improve airports, according to the White House, and $38 million for electrical vehicle charging systems.

Amodei favored many of the projects in the $1.2 trillion infrastructure bill but opposed Democrats coupling the legislation with the social spending package.

Titus argued before the Rules Committee on various projects in the bill, including a paid leave provision. She also helped shepherd the transportation bill through the House.

Lee and Horsford, meanwhile, joined other front-line Democrats in seeking prescription drug relief in the bill, and both championed extended child tax credits aimed at working families still struggling from the economic shock of the coronavirus pandemic.

The social spending bill would provide prekindergarten for an additional 65,895 children in the state and expand Medicare coverage for 71,000 Silver State residents, according to the White House.

The bill also would reduce prescription drug prices through Medicare and cap out-of-pocket costs for medicines for seniors, benefits that would be paid for with an increase on wealthy taxpayers, a 15 percent corporate minimum tax and increased enforcement of tax laws.

Also in the social spending bill, known as the Build Back Better Act, is a raise in the state and local tax deduction from $10,000 to $72,000 sought by lawmakers in high-tax states.

The $10,000 cap was imposed by the GOP tax cut bill in 2017 and limited the deduction on federal income tax forms for local and state property and income taxes. It is set to expire in 2025.

Even with the cap, the deduction benefits higher earners, and particularly those in high-tax states, according to the Tax Foundation, a right-of-center think tank in Washington.

Seven states, California, New York, Texas, New Jersey, Maryland, Illinois and Florida, claimed more than half of the deductions nationwide in 2018, according to the Tax Foundation.

California alone claimed 19.8 percent of state and local tax deductions, nationwide, while Nevada was one of the lowest states, claiming only 0.59 percent of deductions, with high-income filers in the state receiving a disproportionate amount of the benefit, according to Tax Foundation analysis based on Internal Revenue Service figures.