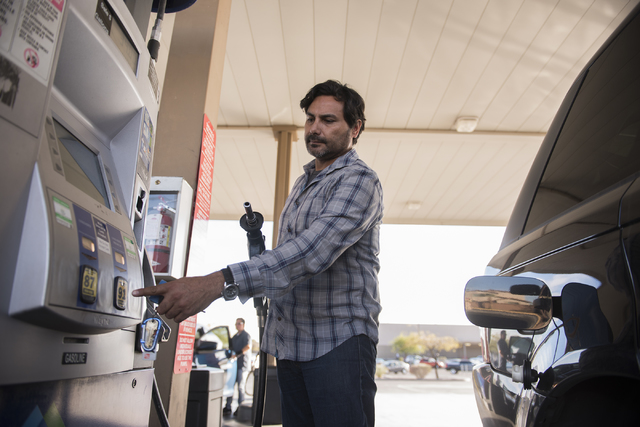 By a double-digit margin, Clark County voters were poised to approve a decade-long incremental county fuel tax hike that will see them paying more at the pump to fund nearly 200 roadway projects.

With 100 percent of precincts reporting early Wednesday, 56.28 percent of the votes counted favored Question 5 while nearly 43.72 percent had been cast against the measure.

The county fuel tax increase would be phased in over 10 years to raise roughly $3 billion for local road construction, maintenance and repair projects.

The measure would increase gasoline taxes by about 3.6 cents per gallon annually, which amounts to roughly 36.32 cents more per gallon by 2026, according to projections from the Regional Transportation Commission of Southern Nevada.

Those figures are based on a 4.54 percent annual inflation rate connected to the producer price index.

The ballot question asked voters for a 10-year extension of the fuel revenue index tax that took effect in 2013.

RTC receives $58 million annually from state and federal sources, in addition to the fuel tax approved in 2013. Before that, drivers in southern Nevada paid a 52-cent tax on every gallon of gasoline purchased. With the fuel revenue index tax, drivers now pay a 62-cent tax per gallon. With the measure approved, drivers could be paying 98.32 cents tax per gallon by 2026.

There was no formal opposition to Question 5 leading up to Election Day, but Nevada drivers pay the 10th-highest gasoline tax in the country, according to a study released in September by the Guinn Center, a nonprofit, bipartisan research group.

The study contended that one of the arguments against the tax is it takes a larger percentage of income from low-income consumers and it would disproportionately affect older, less fuel-efficient vehicles.

The 10-year extension would funnel roughly $300 million per year toward the almost 200 infrastructure projects.

The fuel tax would stop rising after Dec. 31, 2026, but the increases would stay in effect for another two decades to pay for the county bonds that will initially pay for the projects.

Had Question 5 failed, that funding probably would have stayed flat, likely leaving several projects delayed or not completed as planned, including a new interchange for the Centennial Bowl at U.S. Highway 95 and the 215 Beltway.

There was some debate this year among Clark County Commission members about the question’s wording on Tuesday’s ballot. The wording voters saw asked “Shall Clark County continue indexing fuel taxes to the rate of inflation, through Dec. 31, 2026, the proceeds of which will be used solely for the purpose of improving public safety for roadway users and reducing traffic congestion, by constructing and maintaining streets and highways in Clark County?”