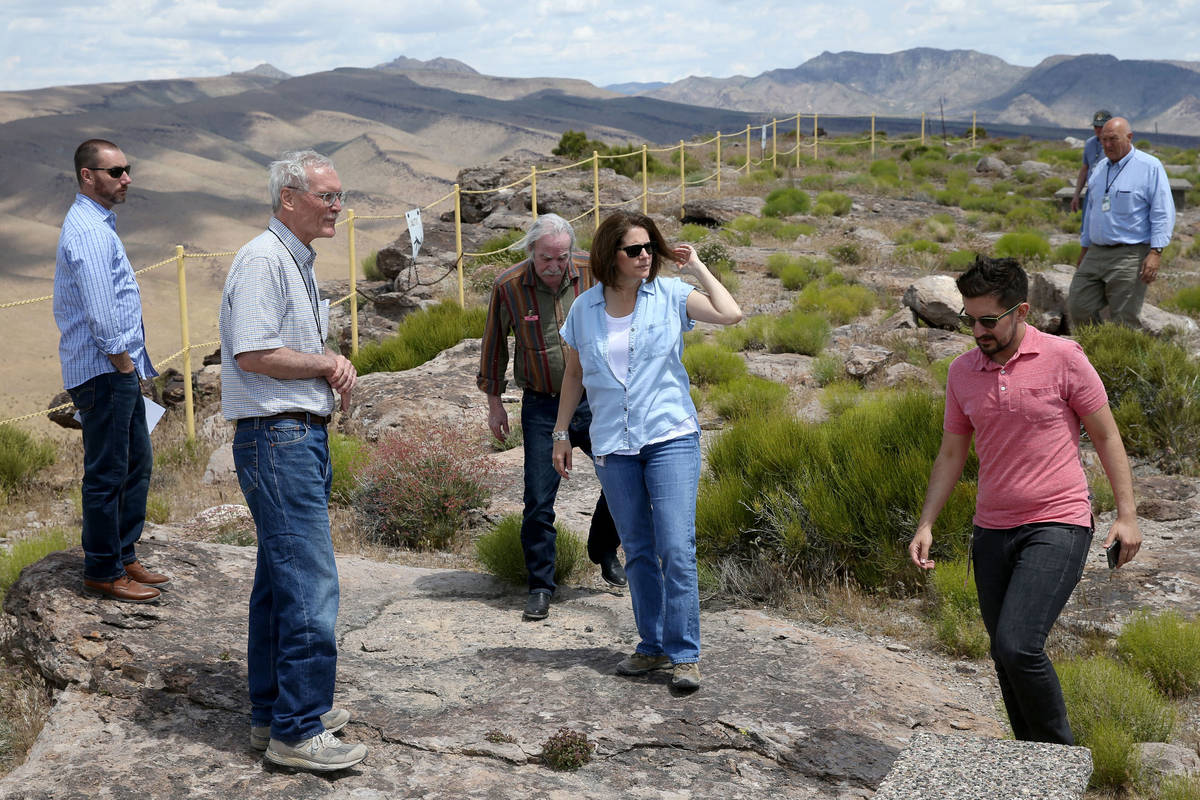 U.S. Sen. Catherine Cortez Masto, D-Nev., gets a tour on a high ridge line on Yucca Mountain 90 miles northwest of Las Vegas from William Boyle, director of Office of Spent Fuel & Waste Science and Technology at the U.S. Department of Energy, second from left, Friday, May 31, 2019. At right is her Communications Director Ryan King. Behind Cortez Masto is Steve Frishman, a technical consultant to the state of Nevada. (K.M. Cannon/Las Vegas Review-Journal) @KMCannonPhoto

WASHINGTON — Energy secretary nominee Jennifer Granholm assured Sen. Catherine Cortez Masto on Wednesday that the Biden administration has no plans to restart the licensing process to build a nuclear waste repository at Yucca Mountain in Nevada.

“The administration opposes the use of Yucca Mountain to store nuclear waste,” Granholm told the Senate Energy and Natural Resources Committee during a hearing on her nomination.

Under questioning by Cortez Masto, Granholm, a former Michigan governor, gave the Nevada senators assurances on the removal of weapons grade plutonium stored in the state, as well as Yucca Mountain and the three-decade stalemate over efforts to store nuclear waste from power plants and Navy vessels.

“This administration is committed like Nevada to move forward on finding a solution that does not include Yucca Mountain,” Cortez Masto, D-Nev., told the Review-Journal following the hearing.

Cortez Masto said she was pleased with Granholm’s assurances, and her pledge to find a location where states, local governments and tribal leaders agree to accept a nuclear waste repository. With some exceptions, most Nevada officials are opposed to storing waste at Yucca Mountain.

During the 2020 campaign, Biden said he was opposed to the use of Yucca Mountain, as did former President Donald Trump, whose administration failed for three consecutive years to restart the application process to authorized the repository 65 miles northwest of Las Vegas.

The Yucca Mountain nuclear storage program was halted under the Obama administration, when Biden served as vice president.

During questioning, Granholm also assured Cortez Masto that she would abide by a negotiated agreement to begin removing weapons grade plutonium stored in Nevada.

The shipment prompted a two-year legal fight between the state of Nevada and the Energy Department.

Cortez Masto negotiated an agreement with then-Secretary Rick Perry to begin removing the plutonium from Nevada beginning in 2021. The plutonium is expected to be removed completely by 2026. Granholm said she would abide by that negotiated agreement.