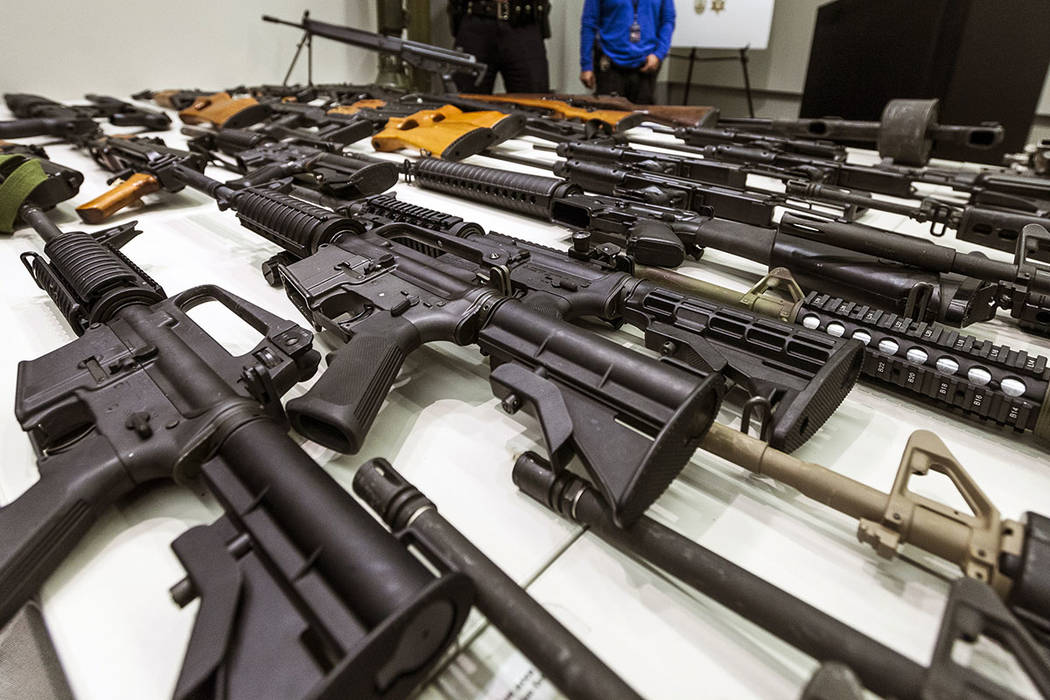 In this Dec. 27, 2012, file photo, a variety of military-style semi-automatic rifles obtained during a buy back program are displayed at Los Angeles police headquarters. (AP Photo/Damian Dovarganes, File)

WASHINGTON — As public pressure builds on Congress and the White House to act, House Democrats plan to take up legislation to ban high-capacity ammunition magazines that have been used in recent mass shootings after lawmakers return from August recess.

House Judiciary Committee Chairman Jerry Nadler, D-N.Y., said his panel would hold a hearing on the legislation on Sept. 4 to address gun violence in the wake of deadly attacks and three mass shootings in the past four weeks.

Rep. Dina Titus, D-Nev., is one of three House members who filed the Keep Americans Safe Act, which would ban high-capacity ammunition magazines that have been used in mass shootings, including the Oct. 1, 2017, tragedy in Las Vegas that left 58 dead and hundreds wounded.

Despite the recent spate of shootings and pressure from the public on lawmakers and elected officials to take action, the likelihood of a ban on magazines or semi-automatic rifles appears remote.

President Donald Trump said immediately after the most recent shootings that he could support “meaningful” background check legislation and bills that would allow authorities to take weapons away from those people deemed a high-risk to attempt an attack.

But Trump appeared to soften his support Sunday. “We already have a lot of background checks, OK?”

House Speaker Nancy Pelosi, D-Calif., said Monday that she hoped the president would “listen to the 90 percent of the American people who support universal background checks.”

Strengthened background checks and a ban on high-capacity magazines are opposed by the gun lobby, which contributes to the campaigns of lawmakers from both parties, but overwhelmingly to Republicans who support the positions of gun rights groups like the National Rifle Association.

Christine Mortensen, an NRA spokeswoman, did not immediately respond to a request for comment from the Review-Journal. But she told the Washington Post that “there’s not a shred of evidence that high-capacity magazine bans work.”

Recent studies show that mass shooting attacks where high-capacity magazines are used with semi-automatic weapons result in a larger number of casualties.

Since 1980, there have been at least 74 mass shootings (with three or more fatalities) where the shooter used high-capacity magazines, according to the Violence Policy Center, a national educational organization that works to reduce gun deaths.

The Las Vegas shooter, Stephen Paddock, 64, equipped 13 semi-automatic assault rifles with “bump stock” accessories that accelerate the rate of fire to that of nearly an automatic weapon.

The Nevada mass shooting is currently listed as the worst in U.S. history by the Justice Department because of the number of fatalities, 58 people, plus the shooter.

Although Congress failed to act on bills to ban bump stocks, several states have passed laws making possession and sales of the devices illegal and Trump ordered the Bureau of Alcohol, Tobacco and Firearms to regulate bump stocks like machine guns.

This month, the assailant in the mass shooting in Dayton, Ohio, used a drum magazine that holds 100 rounds, legally purchased in Texas, to attack a downtown nightspot. He was gunned down by police, but not until after he got off 40 rounds into crowds.

“There is only one purpose for a high-capacity magazine,” said Rep. Ted Deutch, D-Fla., “to maximize human casualties and allow gunmen to fire more rounds of ammunition at a time without reloading.”

Deutch, a co-author of the Keep Americans Safe Act, said the bill would restrict magazines to 10 rounds of ammunition. Typical magazines hold 30 rounds.

Similar legislation has been filed in the Senate by Sen. Bob Menendez, D-N.J. It is co-sponsored by more than a dozen senators, all Democrats, including Catherine Cortez Masto and Jacky Rosen of Nevada.

Menendez said it’s time for McConnell and Republicans to work with Democrats to advance the high-capacity magazine legislation in the Senate.

McConnell has asked Republican committee chairmen in the Senate to look at bipartisan ways to address the mass shootings.

“New laws from Washington D.C. alone won’t stop this violence,” Alexander said. “It will take a change in behavior.” 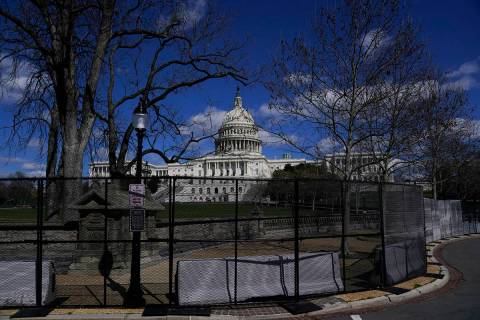