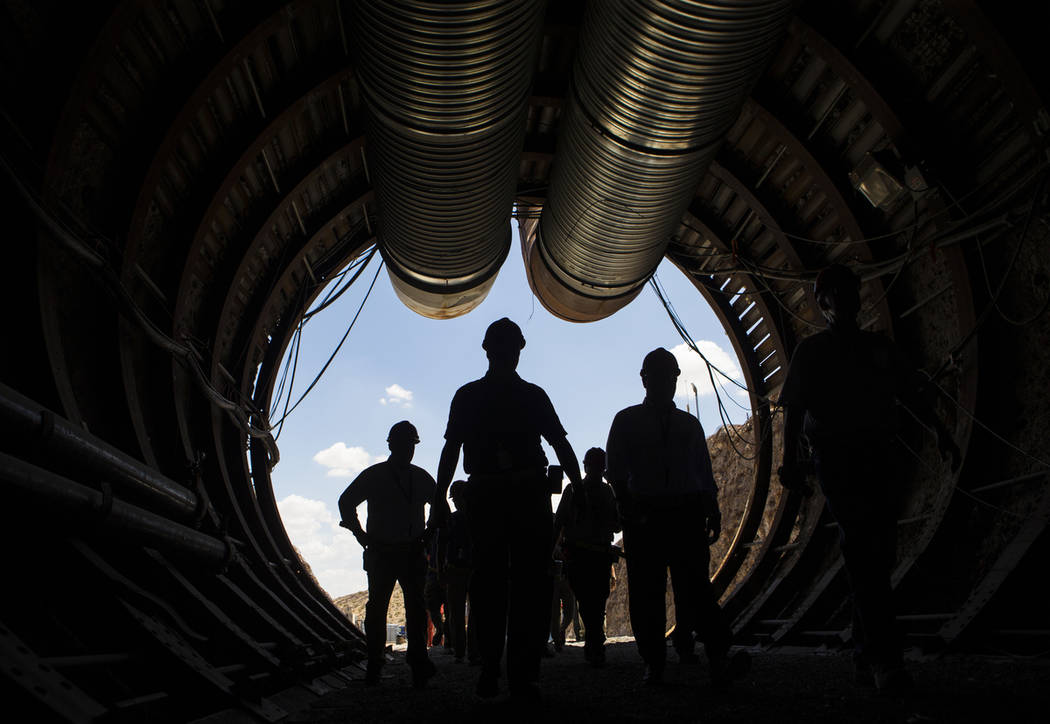 Members of a congressional tour make their way through the south portal of Yucca Mountain near Mercury on Saturday, July 14, 2018. (Chase Stevens Las Vegas / Review-Journal) @csstevensphoto

Trump administration secretaries fanned out across Capitol Hill to defend a proposed spending blueprint with cuts to social and domestic programs, and policy reversals like the president’s position on Yucca Mountain due to political concerns in Nevada.

The reversal was applauded by Nevada, and some Republicans who seek to end a three-decade stalemate on disposing waste stored at 121 sites in 39 states.

But Republicans who favor opening Yucca Mountain, as well as Democrats like Rep. Jerry McNerney of California, a House Energy and Commerce subcommittee chairman, took the administration to task.

The Undersecretary of Energy, Mark Meneze, told McNerney during a subcommittee hearing that Trump was frustrated that “we have not been able to get the resources of authorization that we need to license Yucca.”

Instead, he has requested $27.5 million for “exploring innovative approaches for storing long-term waste.”

McNerney asked Meneze to describe those “innovative” approaches, and when he failed to directly answer, the congressman exclaimed, “I haven’t heard anything about that yet!”

Duncan, a subcommittee member, jumped in: “It’s time to get Yucca Mountain back on track.”

South Carolina has 4,500 tons of spent nuclear fuel and waste being stockpiled at facilities in that state, according to Duncan, who has noted that while Yucca Mountain is a sensitive political issue in Nevada, the proposed site in the state is located on federal property.

In a statement, Duncan said he understood the political sensitivities of Yucca Mountain in Nevada, but said the state cannot have veto power over current federal law.

Meneze told the subcommittee that the president was hopeful that an interagency process working with states “to find a way forward on this” would eventually include Yucca Mountain, which is designated by law as the site for permanent storage of nuclear waste.

The undersecretary also told Congress that the federal government was bound by law to develop Yucca Mountain, and that lawmakers would have to change law to allow temporary storage at other sites, particularly those run by private companies.

Nevada officials are wary of the president’s election-year conversion on Yucca Mountain, considered a swing state in the upcoming 2020 presidential election.

McNerney has companion legislation with Sen. John Barrasso, R-Wyo., that would allow temporary storage of nuclear waste as long as licensing and development of Yucca Mountain as a permanent repository is continued.

The Barrasso bill is competing with another bill filed by Sen. Lisa Murkowski, R-Alaska, and Sen. Lamar Alexander, R-Tenn., which enjoys bipartisan support, that would streamline approval of temporary or interim storage to immediately remove nuclear waste stockpiled at power plants across the country until the issue of Yucca Mountain is resolved.

Nevada Gov. Steve Sisolak, a Democrat, hand-delivered a letter to Trump at the White House this week urging the president to veto the Barrasso and McNerney bills should they make it to his desk for signature.

The bill filed by Alexander and Murkowski, with changes sought for local approval on siting, is preferred by Nevada officials.

The state’s delegation slammed budget proposals that they said would be harmful to Nevada.

Mnuchin argued that the budget reductions were not cuts but a decrease in rates of increased expenditures.

Russell Vought, director of Office of Management and Budget, argued in the House Ways and Means Committee that the reductions were also a decrease in projected spending.

Rep. Steven Horsford, D-Nev., a member of the committee, accused the Trump administration of using the social program cuts to offset $1.9 trillion added to the nation’s deficit by the Republican tax cuts passed by the last Congress.

“Sweeping money from the children of Nevada to balance your budget on the backs of working Americans after giving a tax cut to the very wealthy and big corporations is not going to happen,” Horsford said.

Sen. Jacky Rosen and Reps. Dina Titus and Susie Lee, all Democrats, quickly pointed out that cuts in the budget would impact Nevada, with a loss of funding for education and environmental programs.

The president’s attempts to take funds from the lands management fund have not been approved by Congress in the past three years.