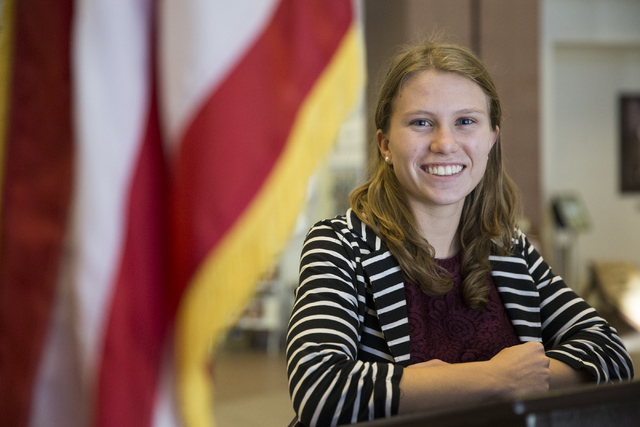 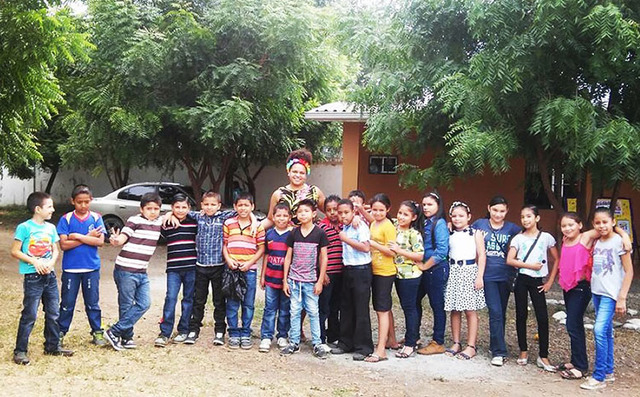 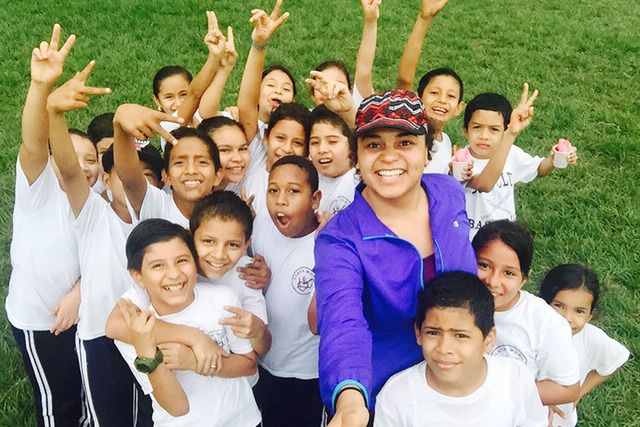 Haley Johnson takes a selfie Jan. 29, 2016, with students celebrating an annual field day at Santa Monica Bilingual School in Vida Nueva Cortes, Honduras, where she was a teacher. (Haley Johnson) 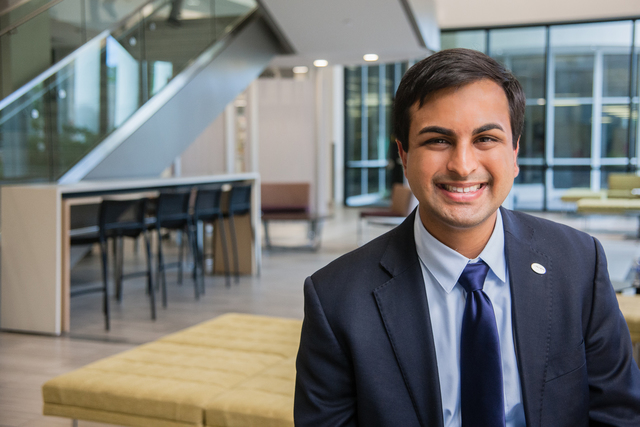 ​Daniel Waqar, a UNLV graduate, recalls the fight over a proposed constitutional amendment to authorize a state lottery. "“I didn’t think it would be entirely ominous, or the forces that be were entirely stacked against me,” he says. (Katy Griffin/UNLV University Communications​) 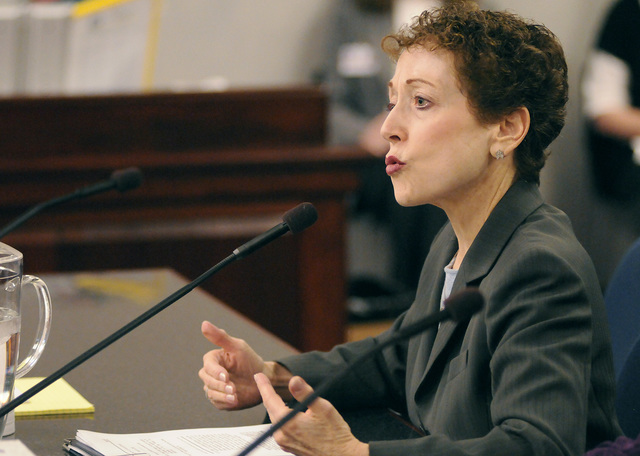 CARSON CITY — Former state Sen. Valerie Wiener was aghast when she read a 2003 report that painted a bleak picture of young people and their basic understanding of government.

“We learned that more than 80 percent of 15- to 25-year-olds could identify the most recent ‘American Idol’ (winner), while fewer than half knew the party of their state’s governor,” Wiener, D-Las Vegas, told an Assembly committee in 2007.

Wiener was testifying on Senate Bill 247, a measure that created what is now the Nevada Youth Legislature, an award-winning program that not only educates Nevada high school students about civics but gives them an active role in setting policy and passing laws pertinent to their generation.

Ten years later, dozens of former and current participants credit the program with sparking their interest in public service. Present and past youth legislators will meet on Saturday for a reunion of sorts, with one event scheduled in Las Vegas and the other in Carson City.

Rose Asaf, of Las Vegas, recalls being a “lost” teen in high school before she was accepted into the program.

“I didn’t always take school and academics seriously,” she said. “It served as a North Star for me.”

Now 19 and a sophomore at New York University, Asaf is pursuing a double major in American studies and politics with a minor in public policy, a career path she likely never would have before considered before.

The Youth Legislature is a statewide political body for high school students — many of them not old enough to legally vote — designed to let them experience what it’s like to consider and vote on legislation. The unicameral body, meaning it has one chamber rather than two, has 21 members, one from each of the state’s Senate districts.

During each regular session of the Nevada Legislature in odd-numbered years, the Youth Legislature is empowered to sponsor one bill for consideration by the state’s actual lawmakers. Youth legislators propose ideas, do research and hold hearings before voting on what they will pursue in the session.

Since its inception, the Nevada Youth Legislature has introduced five bills, three of which became law.

“The two that didn’t were constitutional amendments,” said Wiener, who serves as chairwoman of the foundation that oversees the young legislators and is the heart and soul of the program. She added, “I don’t tell them how difficult those are.”

Last session, Asaf’s bill was chosen by the group, was overwhelmingly approved by the Legislature and was signed into law by Gov. Brian Sandoval. It provides amnesty from criminal charges to underage drinkers faced with emergency medical situations if they call for help for themselves or others in need.

In 2011, another Youth Legislature-sponsored measure was passed into law requiring the state Board of Education to develop a model curriculum for English and math. Haley Johnson, now 24, said she drew on her high school experience in proposing the bill.

“For me, education was such a huge part of my future,” recalled Johnson, who said she was a top student in high school but “only average” when it came to national-level achievement exams.

“That’s not to say the education was bad,” she added, “but that it could be improved.”

Johnson graduated in 2014 from the University of Nevada, Reno with degrees in political science and international relations. She taught at a bilingual school in Honduras and will be working at the front desk of the Nevada Senate when the Legislature convenes on Feb. 6.

A third piece of legislation developed through the Youth Legislature was passed in 2009 authorizing school districts to establish teen mentoring programs.

Other measures have taken another path.

A Youth Legislature measure encouraging high school internship programs was not chosen as the priority bill in 2013. But the proponent, Grant Gabriel, reached out to state Sen. James Settelmeyer, R-Minden, who introduced it. It, too, became law.

Another runner-up proposal in 2015 sought to require schools to teach financial literacy. State Sen. Joyce Woodhouse, D-Henderson, embraced the measure and it garnered bipartisan support. Though it didn’t get through the legislative process, it is expected to be reconsidered in 2017.

Savanna Strott, a current youth legislator from Clark County’s Senate District 2, hopes a lawmaker will carry her bill in the upcoming session. Strott’s proposal would require schools to provide information to high school students on college financial aid and other services available to those who lack legal status.

“It’s very scary when you’re uncertain of your place in the country,” said Strott, a senior at Desert Pines High School.

She wasn’t surprised her proposal wasn’t picked by the Youth Legislature to present in the 2017 session.

“I didn’t expect mine to be chosen,” she said. “But I was a lot more disappointed than I thought. It really hurts when you’re so passionate about something.”

But the disappointment fueled her determination.

In 2011, the Youth Legislature sponsored a proposed constitutional amendment to allow a state lottery to help fund education. Lotteries are banned by the Nevada Constitution, and efforts to change that inevitably run up against the powerful casino industry.

The resolution failed to get out of committee.

“At 16 years old, you’re a little bit fearless,” Waqar said by phone from Washington, D.C., where he works for Millennium Challenge Corp., an independent U.S. foreign aid agency committed to fighting global poverty, while contemplating which graduate school to attend.

“I didn’t think it would be entirely ominous or the forces that be were entirely stacked against me,” the 2016 UNLV graduate and Truman Scholar recalled.

Despite the setback, he considered it an “intellectual experience” on how to get more money for education. “It may not have passed, but it was a great opportunity for me to see this process in action, how we can do better next time,” he said.

A Muslim whose parents came to the United States from Pakistan, Waqar said the Youth Legislature experience got him interested in public service.

“Something like this would never exist in Pakistan,” he said.

The Youth Legislature in 2013 proposed protecting Millennium Scholarship funds from being diverted to other uses by enshrining it in the Nevada Constitution.

Alex Bybee, a former chair of the Youth Legislature, a previous UNR student leader and now a director at the Public Education Foundation in Las Vegas, and Gabriel, also a former chair who is now a senior at Yale University, were key witnesses who testified on that proposal during a joint meeting of the Senate Finance and Assembly Ways and Means committees.

“Oh, my gosh. I can almost, talking to you now, feel the butterflies in my stomach,” Bybee said recently. “I remember loosening my tie and pouring water.”

“They took the gloves off; no punches were pulled,” Gabriel agreed. “It got a good thrashing. They really examined it and vetted it.

“It (attested) to how seriously the Legislature took the Youth Legislature,” he said.

Though the proposed amendment did not succeed, late state Sen. Debbie Smith, who was chairwoman of the Senate Finance Committee, applauded the young advocates for their “ability to think on their feet when posed with very tough questions.”

The current class of youth legislators isn’t backing away from controversial topics. In November, the group voted to sponsor a bill dealing with consensual sex.

As initially proposed, the idea was to include teaching of the topic in health classes as part of sex education. But some students raised concerns that not all students take health classes and therefore wouldn’t be exposed to the material.

Just mentioning “sex ed” ignites passionate debate, the young lawmakers were cautioned by mentors and lobbyists, who suggested another route to accomplish their goal.

“The point is that you will get opposition,” A.J. Delap, a Las Vegas Metro police lobbyist, told the group. He added, “Be creative in how you package this and I think you will have a better chance at success.”

After discussion, the youth legislators opted to craft their proposal so that the material would be taught in government class, from the perspective of legal consequences, though schools could include it in the health curriculum as well.

The precise language is being drafted by the Legislative Counsel Bureau. Youth legislators will meet Thursday to review the language. They will present their bill to committees in April when lawmakers recognize Nevada Youth Legislature Day.