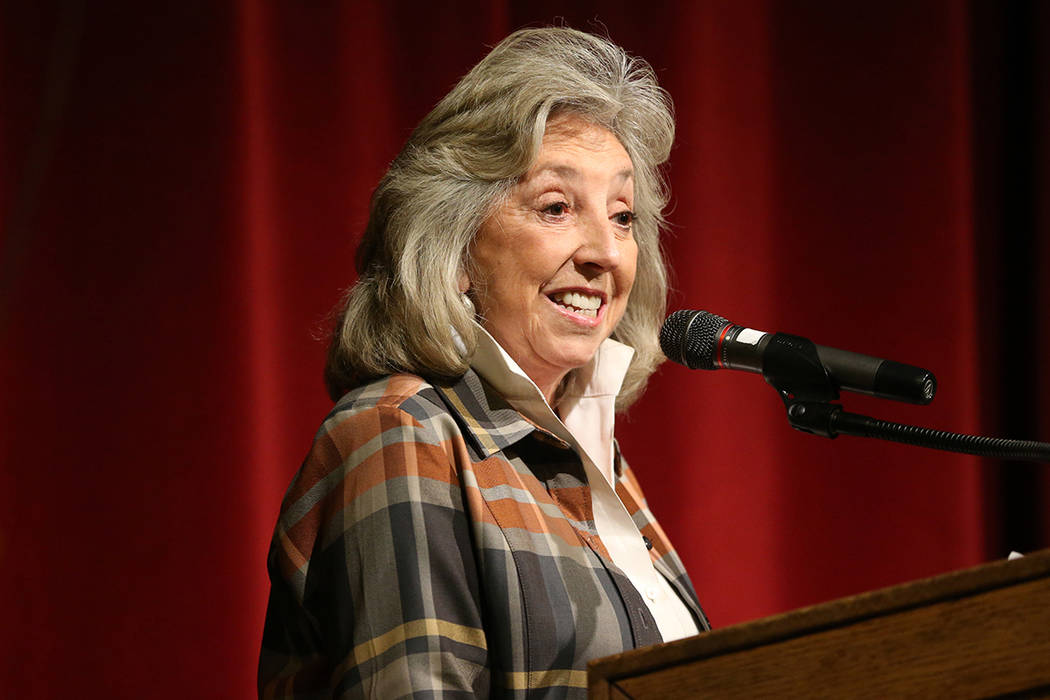 WASHINGTON — The historic significance of impeachment isn’t lost on Rep. Dina Titus, the only Nevada lawmaker on the panel hearing closed-door testimony about President Donald Trump and a controversial telephone call with the president of Ukraine.

Congress has voted only twice in U.S. history to impeach a president — Andrew Johnson in 1868 and Bill Clinton in 1998. Richard Nixon resigned after a House panel passed articles of impeachment for the full chamber to consider in 1974. Johnson and Clinton were both impeached by the House and acquitted by the Senate.

It’s against that historic backdrop that Titus, who once taught American government as a UNLV professor, takes note of the nature of the testimony and depositions she hears behind closed doors, and which could lead to the impeachment of President Donald Trump.

“You really feel it when you walk in the room,” Titus said during an interview in her Capitol Hill office. “The sense of responsibility, the level of the testimony, just the gravity of the situation.”

“It’s a historic moment,” she said.

For the most part, Titus said the closed-door sessions have kept the hearings “from turning into a circus.”

But that changed last week when the fast-paced process exploded into partisan rancor and GOP lawmakers pushed past Capitol Police and entered the secured room, disrupting testimony and the impeachment inquiry.

Outside in the hallway others yelled: “Let us in! Let us in!”

Republicans pushed back on the process as evidence mounted against the president and largely confirmed a whistleblower’s complaint that Trump tried to coerce the Ukrainian president to dig up dirt on political rival Joe Biden while withholding $400 million in military aid that had been approved by Congress.

Titus said the group barged into the secured room with cellphones, prohibited because of the nature of evidence, documents and witnesses. It delayed the procedure for hours.

“They wouldn’t leave,” Titus said. “And they ordered in pizza just to stop the process.”

Titus, who has served a decade in Congress, called the actions “childish.”

Jordan, the ranking Republican on the Oversight Committee who has sat through testimony in the secured room, defended the theatrics, saying the “people want to know what’s going on in the basement of that room.”

Republicans were rewarded with praise by Trump, whose frustration with the investigation has led to daily Twitter rants and tirades.

Despite GOP complaints that the proceedings are being held in secret, Republican members of the three House committees conducting the investigation, Intelligence, Foreign Affairs and Oversight, have been in the room with GOP staff and lawyers.

Titus is one of 63 Democrats and 48 Republicans who have been weighing evidence since the inquiry was announced by Speaker Nancy Pelosi, D-Calif., on Sept. 21.

Testimony gathered in the closed door hearing also is expected to be made public, Intelligence Chairman Adam Schiff, D-Calif., said.

The Republican outburst came one day after the top U.S. diplomat to Ukraine, William Taylor, undercut the president’s version of events and described a quid pro quo, with Trump seeking a political investigation into Biden and his son, Hunter, in exchange for the military aid.

Taylor’s testimony was seen as a forceful blow to Trump, Titus said.

“That testimony, I think, was damning,” Titus said. “It clearly established that there was a quid pro quo.”

The congresswoman commented on the Taylor testimony after it was made public. She would not speak directly about other depositions, however. She said most witnesses have been willing to comply, regardless of the White House order not to cooperate with the committee.

Democrats, including Titus, say most of the testimony of others corroborates the whistleblower account of the telephone call between Trump and Ukrainian President Volodymyr Zelenskiy.

Many Republicans dismiss the testimony as hearsay.

In addition to the impeachment hearing, other investigations into the president are ongoing in the House.

House Transportation and Infrastructure Chairman Peter DeFazio, D-Ore., and Titus, chairwoman of the subcommittee on public buildings, are investigating Trump’s lease of a portion of the Old Post Office building from the federal government where the Trump International Hotel is located.

DeFazio and Titus are investigating whether the arrangement is in violation of the emoluments clause of the Constitution that prohibits a president from accepting gifts or profits to shield the president from corrupting foreign influences.

DeFazio issued subpoenas for those documents last week, and the Trump Organization announced it was exploring a sale of the hotel.

That investigation is separate from the impeachment inquiry, which began in September and is on a fast track to be completed by the holidays.

Meanwhile, inside and outside the nation’s capital, the impeachment inquiry has been met with partisan reaction that mirrors the sharp division of the country that culminated with the 2016 presidential election.

“President Trump has done nothing wrong — this is a coordinated smear campaign from far-left lawmakers and radical unelected bureaucrats waging war on the Constitution,” said White House spokeswoman Stephanie Grisham.

Democrats charge that the president has abused the power of his office by trying to coerce a foreign government to interfere with the 2020 election and using military aid as leverage.

In Nevada, the congressional delegation is divided along party lines, with the lone Republican, Rep. Mark Amodei, opposing Pelosi’s call for an impeachment hearing, while supporting House oversight of the executive branch.

Sen. Catherine Cortez Masto, D-Nev., told the Review-Journal that when she was back in the state, “many people, rightfully so, are concerned that we have a president of the United States who reached out to a foreign ally to investigate Joe Biden.”

“I think people understand that. And I think they get that and are rightfully concerned and that there should be some sort of investigation of what’s going on there,” she said.

Titus and Democratic leaders say they have the votes in the House now to impeach Trump.

But without the votes in the Senate, impeachment could backfire on Democrats.

National opinion polls show voters are most worried about the rising cost of health care, the economy and other pocketbook issues.

“I think you see from the polling that more people are starting to realize this is very serious when you threaten national security,” Titus said, adding that non-partisan voters are moving there, too.

Titus said a House failure to address alleged attempts by the president to break the law and invite foreign governments to interfere in U.S. elections would be a dereliction of duty.

“Most of my constituents say ‘get on with it. This guy’s got to go,’” Titus said.