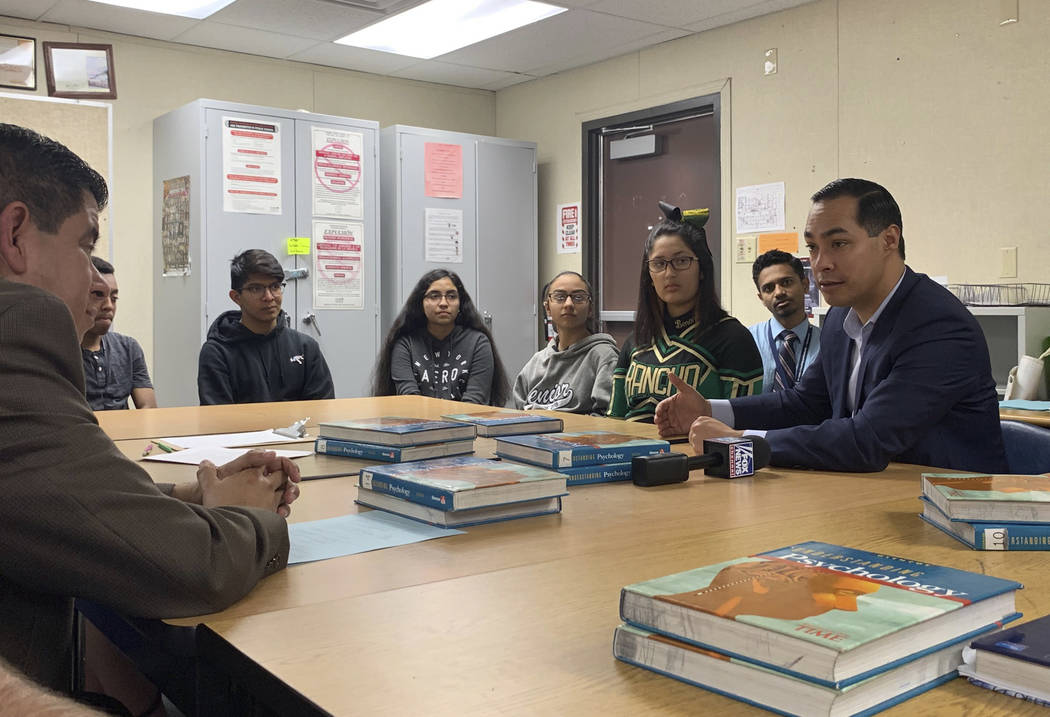 Former Obama housing chief Julian Castro, right, meets with students at Rancho High School in Las Vegas, Tuesday, Jan. 8, 2019. Castro has met with Nevada Democrats and leaders of the Latino community in Las Vegas days ahead of his planned announcement of a 2020 run for the presidency. (AP Photo/Michelle L. Price) 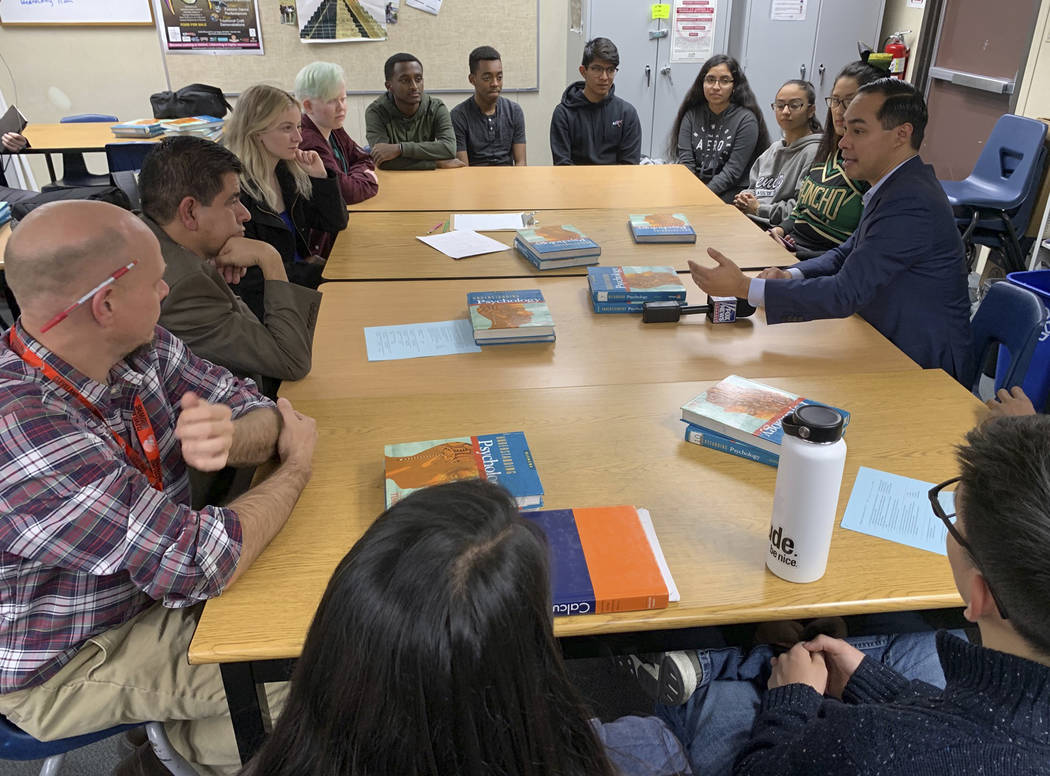 Former Obama housing chief Julian Castro meets with students at Rancho High School in Las Vegas on Tuesday, Jan. 8, 2019. Castro has met with Nevada Democrats and leaders of the Latino community in Las Vegas days ahead of his planned announcement of a 2020 run for the presidency. Castro, the Democratic former mayor of San Antonio who served in President Barack Obama's second term, met Tuesday with the Latino Chamber of Commerce president and an active Hispanic student union in north Las Vegas, where he spoke about universal health care, affordable housing and climate change. (AP Photo/Michelle L. Price)

Former Obama administration housing chief Julian Castro met with Nevada Democrats and leaders of the Latino community in Las Vegas on Tuesday, days ahead of his planned announcement of a 2020 run for the presidency.

Castro, the Democratic former mayor of San Antonio who served in President Barack Obama’s second term, said that as a presidential candidate, he’s going to be talking about improving public education, equal treatment under the criminal justice system and addressing what he called the existential threat of climate change.

Castro, who plans to announce his campaign in San Antonio on Saturday, told a group of Las Vegas high school students that two things at the top of his agenda if elected are to recommit the United States to the Paris climate accord and work to pass universal health care legislation.

The next president will also have to rebuild alliances with foreign countries that President Donald Trump has weakened, Castro said, and “spend at least the first two years of their administration trying to clean up the mess of an administration that has been quite corrupt and is just doing a terrible job of managing these federal agencies.”

Republican National Committee spokeswoman Renae Eze, in a prepared statement, called Castro’s visit “nothing more than a mandatory campaign rendezvous for an ego-driven politician that only cares about advancing his career, not Nevadans.” She said Castro would “deliver empty promises.”

Castro, fighting off a head cold Tuesday afternoon, helped re-arrange tables and chairs to set up his roundtable chat with about a dozen students and teachers in a portable classroom at Rancho High School.

The north Las Vegas school is known for political alumni, including U.S. Rep. Ruben Kihuen, and its active Hispanic student union, whose leaders met with Castro.

“I remember that when I was in high school, I kind of had mixed feelings about politics because in some ways I felt like I didn’t see what difference it made,” Castro said. “I didn’t see that the people in office were doing much to help the people I was growing up with.”

Castro is expected to be among the youngest candidates in the field and the most prominent Latino.

On Tuesday night, minutes after Trump wrapped up a prime-time address to the nation about his U.S.-Mexico border wall, Castro told Clark County Democrats that the president “delivered his usual lies about immigration.”

“The president has been on a three-year mission to scare the American people on the issue of immigration,” Castro said. He added that America needs to secure its border with personnel and technology and needs to “harness the potential of immigrants in the country, starting with our Dreamers.” The term relates to the never-passed DREAM Act that would have provided protections for young immigrants who were illegally brought to the United States as children.

Castro’s visit was the first public one to Nevada by a potential 2020 candidate this year, though he and other potential 2020 contenders made appearances during last year’s campaign season.

In August, Castro visited a Nevada Democratic Party office on the heavily Latino east side of Las Vegas and stumped for Democratic candidates north in Reno, the state’s second-most populous area outside of Clark County.

Earlier in the day, Castro met with Peter Guzman, the president of the Latin Chamber of Commerce, which has backed candidates of both parties in past elections.

Guzman, a Republican, said he and Castro spoke about how education and health care are areas where entrepreneurs and business-friendly Democrats can find common ground.

Guzman said he told Castro that he’d be a top contender for vice president if he doesn’t become the Democratic presidential nominee in 2020. “If was Joe Biden, I would already be having meetings with him,” Guzman said.