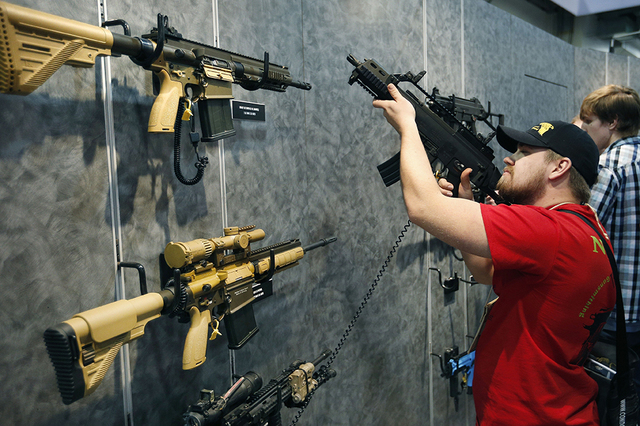 In this Jan. 19, 2016 file photo, Nolan Hammer looks at a gun at the Heckler & Koch booth at the Shooting, Hunting and Outdoor Trade Show in Las Vegas. (AP Photo/John Locher, File) 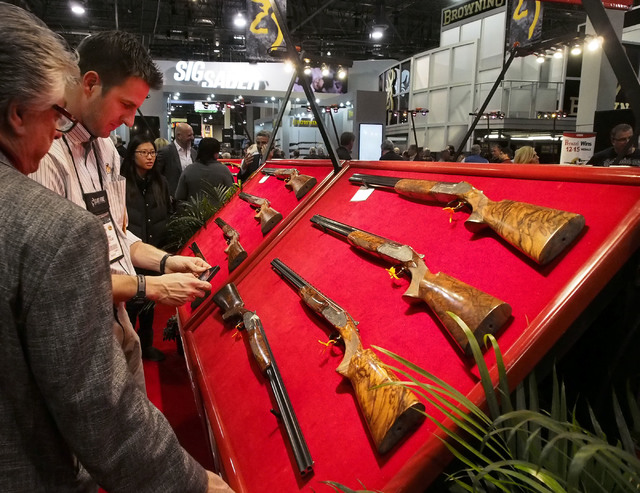 Brian Kock, of Cleveland, Ohio, second from left, takes a photo of a matched set of over/under shotguns at the Perazzi booth at the 2014 Show Show at the Sands Expo in Las Vegas, Tuesday, Jan. 14, 2014. The four-gun set is valued at $352,300. (Jerry Henkel/Las Vegas Review-Journal)

Nevadans voted in favor of expanded background checks for private gun sales by the thinnest of margins Tuesday.

The “Yes” vote on Question 1, which would require in-person background checks for all guns sold among friends, online and at gun shows, was approved by a 50.45 percent to 49.55 percent margin, which amounted to less than 10,000 votes statewide.

Starting Jan. 1, Nevadans looking to conduct a private sale or transfer of a gun will have to go to a federally licensed firearm dealer for a federal background check.

Supporters of the measure expressed their elation at its passing Wednesday morning once the vote was final.

“Voters have made clear that they support common sense gun safety laws like background checks,” Yes on 1 campaign manager Joe Duffy said. “And now we celebrate the hard work and dedication of all of our supporters over the past year who have made this win possible.”

“This fight was in honor of all those killed by senseless gun violence and today we are one step closer to making Nevada a safer place for all of us. That’s something we should all be proud of,” said Elaine Wynn, a member of the campaign’s advisory board.

Robert Uithoven, state director the bill’s opposition, NRA Nevadans for Freedom, said it was a hard fought race given the gap in campaign spending, where the opposition was outspent by the Yes on 1 group by nearly $10 million. The Yes on 1 campaign was heavily funded by New York billionaire Michael Bloomberg’s national gun control group Everytown for Gun Safety.

“Given how much we were outspent by Bloomberg, I think we ran a very good campaign,” Uithoven said.

Uithoven noted that the margin proved much closer than any poll indicated, including a Review-Journal poll at the end of October that showed the “yes” vote leading by double-digits. He said the campaign felt like momentum was on their side as the Election Day drew near.