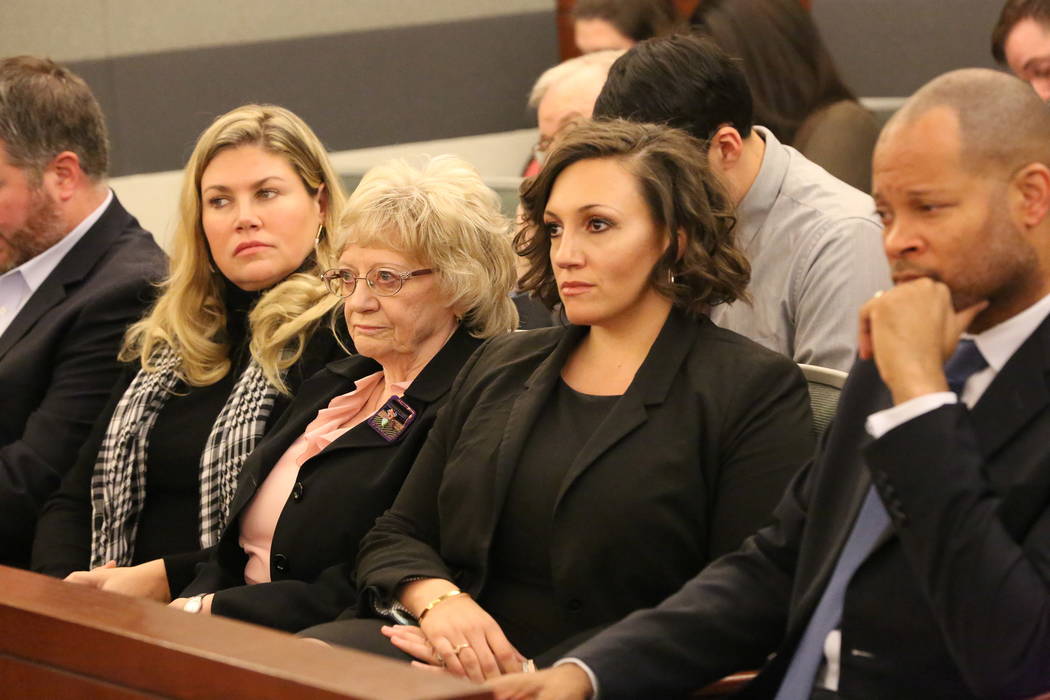 Recall opponents Joyce Woodhouse, center, and Nicole Cannizzaro, right, listen as attorney Marc Elias argues whether it is constitutional to allow people to have their names removed from a recall petition on Wednesday, February 7, 2018. (Michael Quine/Las Vegas Review-Journal) @Vegas88s

Two state Senate recall efforts that could swing control of the Legislature’s upper chamber were dealt a significant blow Thursday that could spell their end.

District Judge Jerry Wiese ruled Wednesday that forms submitted by people asking for their signatures to be removed from the recall petitions targeting Democratic state Sens. Joyce Woodhouse (District 5) and Nicole Cannizzaro (District 6) must be counted — a move that puts the recalls at risk.

Both the Woodhouse and Cannizzaro recalls were deemed by the Nevada secretary of state’s office to have enough signatures to force special elections. But Democrats sued, arguing that more than 2,000 people had signed forms asking to be removed from the petitions. If those forms are verified, that could drop the recalls below the threshold required to hold a special election.

The Republican-backed recall groups plan to appeal the decision to the Nevada Supreme Court. “Everyone involved, including our clients,” knew it would end up in the state’s high court eventually, said Daniel Stewart, an attorney for the law firm representing the groups.

“For the first time in the Nevada’s history, petitions to recall two state legislators were verified, qualified, and filed pursuant to Nevada law. Absent court intervention, historic special recall elections would have already occurred,” he said Thursday. “The Nevada Supreme Court must now have an opportunity to weigh in. We remain confident in our legal arguments and position before Nevada’s highest court.”

Democrats called the recalls “nothing more than an attempt by Nevada Republicans to reverse the results of the 2016 election.

“Thousands of voters across Senate Districts 5 and 6 requested to have their names removed from the recall petitions because they were misled and misinformed by Republican recall proponents,” state Senate Majority Leader Aaron Ford said in a joint statement with the Nevada Senate Democratic Caucus. “This ruling makes it clear the Republicans did not collect enough signatures on either recall petition to call for special elections in District 5 or District 6. Once the full review has been conducted, we have great confidence that these recalls will fail.”

Headed by Nevada Lt. Gov. Mark Hutchison, the attorneys for the Republican groups pushing the recalls argued that any signature withdrawal forms submitted after the petition was sent to election officials should not be counted, saying that accepting such forms was unconstitutional.

Weise’s ruling, however, upheld the constitutionality of Nevada’s law and ordered the election officials in Clark County and the Nevada secretary of state’s office to verify every signature on both recalls as well as all pre- and post-submission withdrawal forms.

Both recalls barely cleared the required signature threshold to push the recalls to a special election, with the Woodhouse petition exceeding it by 243 signatures and the Cannizzaro petition by just 43.

Wiese wrote that he understands the “logistical difficulties” that his order brings, and asked for the validation, verification and reconciliation of the signatures to be completed within 10 business days.

Wiese called for a hearing to be held on April 4 to discuss the outcomes of the signature verifications and determine whether the recalls can move forward.

For Republicans, the recalls are their best shot at retaking control of the Legislature’s upper chamber this year because the Democrat-held seats up for re-election are unlikely to flip.

Democrats have an 11-9 advantage in the state Senate. Independent Sen. Patricia Farley, who was the subject of a related failed recall effort, caucused with Democrats in 2017. Farley said before the attempt to oust her that she will not run for re-election.