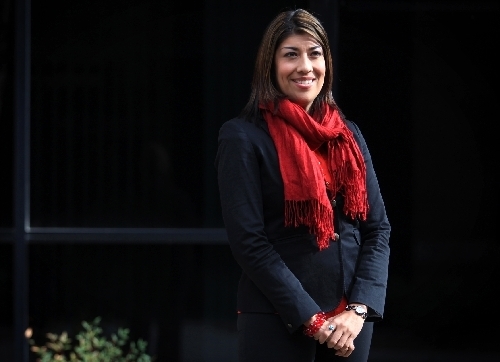 Editor’s note: With more new legislators than ever before, Nevada will have some of its freshest political faces coping with the state’s greatest problems. In an occasional series, the Review-Journal introduces newly elected lawmakers about to take office in Carson City.

After stealing a car and leading a police chase on the streets of North Las Vegas in 1993, it looked like prison was the only state institution for which Lucy Flores was destined.

Seventeen years later, however, she is a newly elected member of the Nevada Assembly.

Flores was 14 years old and involved with a street gang when she stole the car for a beer run. It was just her latest stunt in an escalating series of crimes.

At the time, she was already on probation for shoplifting and burglary. Car theft earned her nearly 10 months in a juvenile prison in Caliente and roughly another year on parole.

It was less than 20 years ago, but to Flores it seems like another lifetime.

"Every year it is harder and harder for me to identify with the person I was," said Flores, 31. "It is a very odd feeling. I feel like I can’t even relate to myself."

She credits the turnaround to advice she got from adults who took an interest in helping her after she dropped out of Rancho High School.

One of the adults was a parole officer who passed up a chance to bust Flores for a violation, choosing instead to advise her to use her brain to broaden her horizons beyond the limited world she grew up in.

"I obviously will never forget this," Flores said. "She knew I wasn’t a bad person. She knew I could do better."

Flores traced her troubled life to a lack of adult supervision.

She is one of 13 children born to her parents. Her mother left when she was 9. Her father was a gardener by day and played Ranchero music at night to earn money.

"He went out every single day and came home with anything he could get," she said.

In the meantime, gang members stepped in as role models, while adults at school didn’t seem to notice.

Flores went from gifted and talented programs in elementary school to truancy and purposefully tanking exams in junior high.

With no intervention, the bad behavior escalated.

"If the student isn’t getting it (guidance) at home, they need to be getting it from someone, or they are going to get it from some dysfunctional place," she said.

Now that Flores has turned her life in a positive direction, she wants to use her role representing District 28, an area that includes her old neighborhood, to help kids avoid the destructive choices she once made.

To that end, Flores says she will fight to ensure schools have the resources to intervene in children’s lives when parents can’t, and work to focus the juvenile justice system on rehabilitation in addition to punishment.

"I was released into the exact same environment I came from. What changed? Absolutely nothing," Flores said of her experience in the system.

"A lot of people don’t realize we have this education to prison pipeline going on."