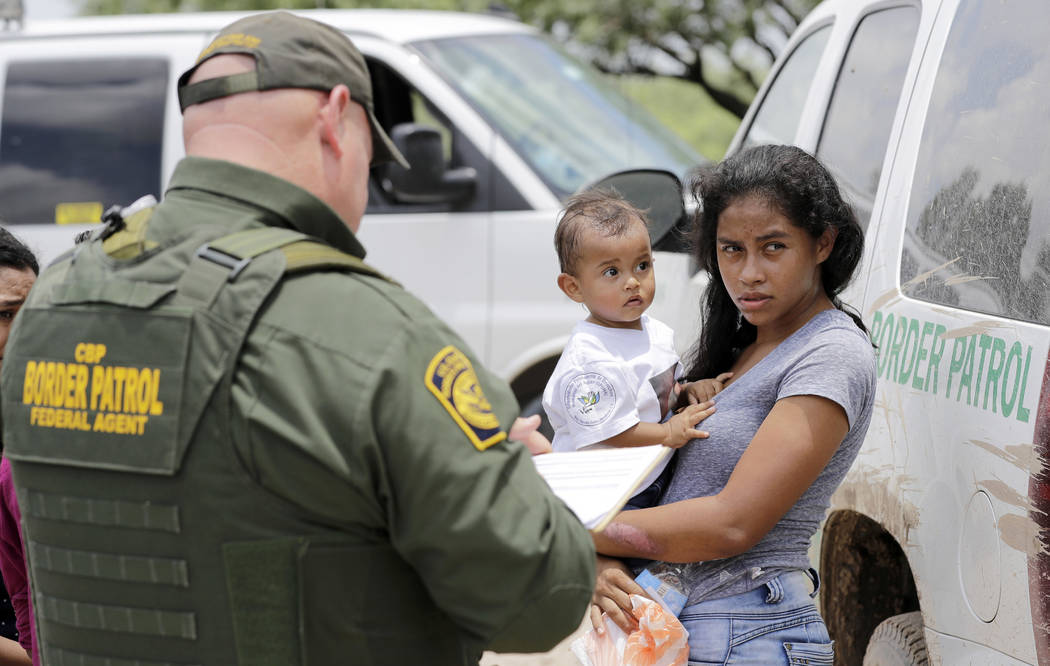 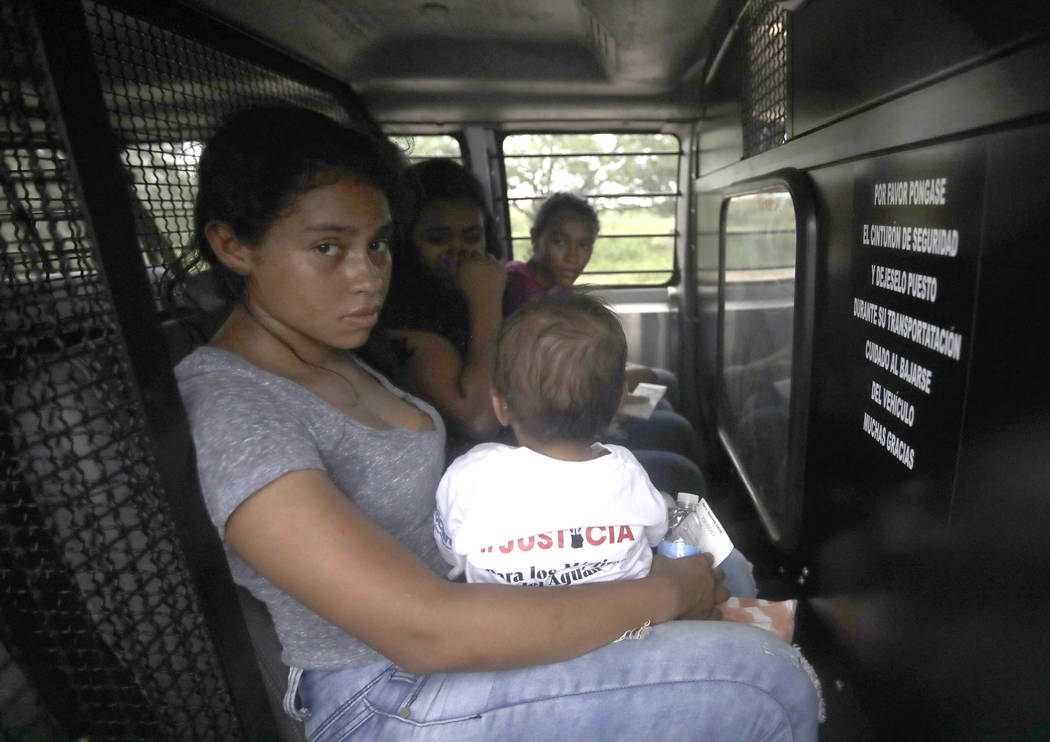 A mother migrating from Honduras holds her one-year-old child in the back of a transport van after surrendering to U.S. Border Patrol agents Monday, June 25, 2018, near McAllen, Texas. They are part of a group that paid a smuggler to illegally get them across the Rio Grande River from Mexico to the United States. (AP Photo/David J. Phillip)

WASHINGTON — Two Nevada lawmakers toured detention facilities in Texas on Monday as President Donald Trump doubled down on his immigration policies and said undocumented immigrants should be immediately deported without judicial review.

A humanitarian crisis at the border as federal agencies carried out Trump’s “zero-tolerance” enforcement led to the separation of more than 2,300 children from their parents, who were detained for entering the country without documents.

Sen. Catherine Cortez Masto, D-Nev., met Monday with Central American parents who have been separated from their children and detained at an Immigration and Customs Enforcement detention center in Los Fresnos, Texas.

“It looks like our prisons in Nevada,” Cortez Masto said by telephone. “They are here because they came with their children.”

Sen. Cortez Masto describes life in a Texas migrant shelter and says detainees told her that they were prevented from watching news of family separations:

"If there is any type of news about the families and the children and being detained, they'll change the channel on them." pic.twitter.com/Gd6D0lx0Ma

Cortez Masto said the fight now is to “reunify these kids with their parents and stop the separations.”

Nearly 1,000 miles away, near El Paso, Rep. Jacky Rosen, D-Nev., toured a temporary tent city outside the Tornillo border crossing where immigrant children are housed. The facility is run by the Department of Health and Human Services.

“Removing protections for migrant children is not the answer to our broken immigration system,” Rosen said later. “We need to address this humanitarian crisis.”

The lawmakers made their pilgrimages to spotlight the Trump administration’s immigration policies on the Southwest border.

Immigration is dominating debate in Washington for a third week as a dazzling series of events continues to unfold around the president’s policy, which has been met with an international outcry.

Although Trump appeared to walk that policy back last week with an executive order that stopped the separations, federal agencies have divulged few details about how they will proceed and how they will reunite children who have been separated.

The president added more confusion to the debate Monday when he proposed deporting undocumented immigrants without due process or a judicial hearing for an asylum claim.

“People must simply be stopped at the Border and told they cannot come into the U.S. illegally,” Trump said on Twitter.

He tweeted that hiring more judges, and putting immigrants through a long judicial process, would make the current system more dysfunctional.

Hiring manythousands of judges, and going through a long and complicated legal process, is not the way to go – will always be disfunctional. People must simply be stopped at the Border and told they cannot come into the U.S. illegally. Children brought back to their country……

“We must continue to BUILD THE WALL!” Trump tweeted.

The president’s proposal to immediately deport those seeking asylum drew a quick response.

….If this is done, illegal immigration will be stopped in it’s tracks – and at very little, by comparison, cost. This is the only real answer – and we must continue to BUILD THE WALL!

Cortez Masto, a former Nevada attorney general, said: “We do not deny due process in this country.”

“This administration is wrong again,” Cortez Masto said. She claimed the president is attacking immigrants for political gain. “It has to stop.”

The escalating political debate over Trump’s immigration policies comes as the House and Senate seek to craft a legislative remedy to stop family separations and address legal restrictions on detaining children.

Lawmakers were pressed to act after the separation of families on the border drew worldwide condemnation. Republican leaders in Congress vowed to address the separations while backing the president’s enforcement to curb illegal immigration.

Sens. John Cornyn and Ted Cruz, both Texas Republicans, are working on legislation to stop the separations of families and streamline the adjudication process by hiring more judges. Cornyn and Cruz also toured detention facilities in the Rio Grande Valley over the weekend.

But Trump has dismissed the hiring of more immigration judges as an unworkable idea.

In the House, a conservative immigration bill that addressed the separations and offered temporary protection from deportation for immigrants eligible for the Deferred Action for Childhood Arrivals program failed last week.

House GOP leaders are separately looking at a narrow bill to address family separations and child detentions. Lawmakers were working on that legislation Monday.

“Congress needs to do what they were elected to do,” White House spokeswoman Sarah Sanders said.

Sanders blamed Democrats in the Senate for blocking legislation, even though the House bill that failed last week saw 41 GOP lawmakers abandon the bill.

“We’re asking Congress to do their part in the process,” Sanders said.

Cortez Masto said her priority is to make sure the administration provides the funding and personnel to make reunification of children and parents take place immediately.

She went to the border to see firsthand the facilities used and how children were being treated.

The senator said she was turned away at the privately run Casa Presidente in Brownsville on Monday.

She then spoke with migrant parents at the ICE facility in Los Fresnos. She said she heard heartbreaking stories from parents worried about the whereabouts of their children.

Cortez Masto said she spoke with Anna, from Honduras, who was separated from her 5-year-old son and has been detained for 13 days. She said she and her husband left Honduras after her husband was threatened by a gang.

The senator said she spoke to another woman who has been separated from her deaf son, age 10. She is desperate to know how he is being cared for.

Cortez Masto described the situation on the border with Central American immigrants as “horrific.”