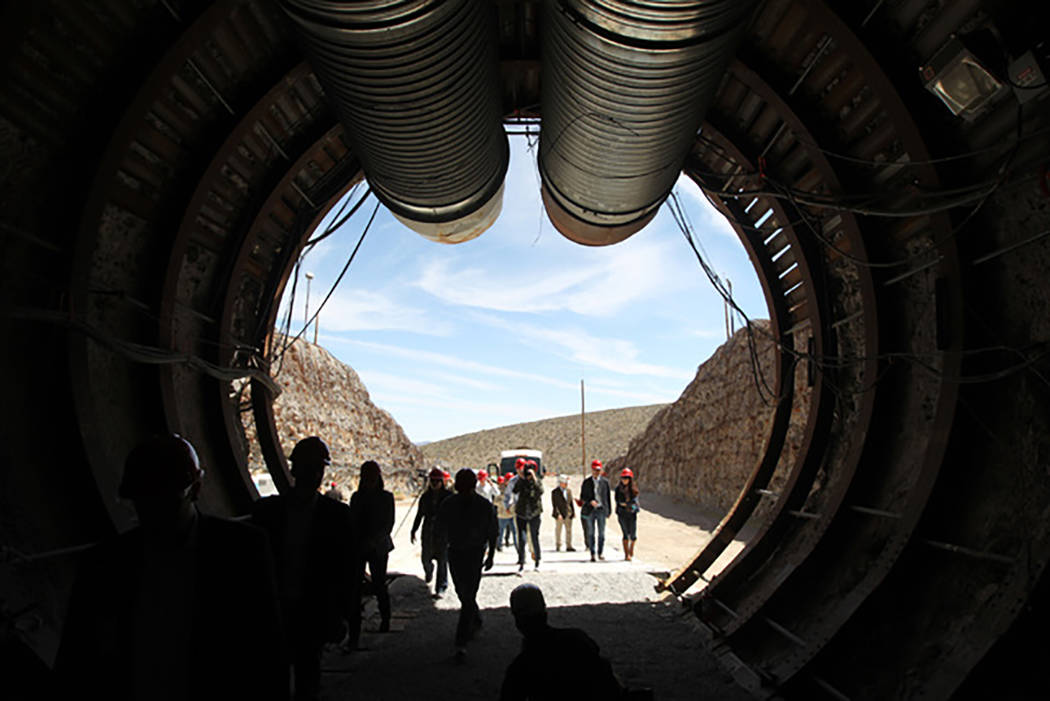 But the state has political cards to play despite the loss of Sen. Harry Reid, D-Nev., whose political clout is credited with stopping the site from opening until his departure from the Senate last year.

Reid, as Senate majority leader, was instrumental in swaying the Obama administration decision to defund the Yucca Mountain project in 2012, despite more than $15 billion that had been spent to develop the Nye County site as the nation’s only permanent repository for nuclear waste.

President Donald Trump has aggressively moved to roll back Obama-era actions, including the halting of the licensing application for Yucca Mountain.

Trump has included $120 million in his fiscal budget blueprint for 2018, which begins Oct. 1., to continue the license application process for Yucca Mountain with the Nuclear Regulatory Commission and find interim solutions to store 79,000 tons of waste produced by plants in 39 other states.

Energy Secretary Rick Perry, a former Texas governor, examined the Nevada site last month. He wrote to the chairman of the House Energy and Commerce Committee about the need for a long-term solution to the nation’s growing inventory of spent nuclear fuel and high-level radioactive waste.

“The importance of resuming the licensing process became even more clearer during my recent tour of the Yucca Mountain site,” Perry said in a letter to Rep. Greg Walden, R-Ore., chairman of the House Energy and Commerce Committee.

A House Energy subcommittee on the environment held a hearing this week on draft legislation to begin the process of reviving Yucca Mountain after nearly six years of inactivity at the site.

In a statement, Sandoval said “the secretary and I do not agree on Yucca Mountain,” but he welcomed continued dialogue with the Energy Department.

Members of the Nevada congressional delegation were emotional in their opposition when they appeared before the subcommittee this week.

Heller, the state’s senior senator, is up for re-election in 2018, and is targeted by the Democratic Senatorial Campaign Committee. Heller is considered vulnerable in a state that voted for Hillary Clinton in 2016.

“It’s going to be a struggle to stave off a Yucca restart,” said Larry Sabato, the director of the Center for Politics at the University of Virginia.

“There is no substitute for heavy seniority, which Harry Reid had and no current member of Congress from Nevada has,” Sabato said.

Still, the state has some political cards to play, Sabato said.

Republicans have a slim 52-48 majority in the Senate, eight votes short of the 60 needed to overcome parliamentary moves to vote on legislation.

While the House appears to be moving quickly to consider legislation to jumpstart Yucca Mountain, no similar legislation is moving in the Senate.

Senate Majority Leader Mitch McConnell, R-Ky., has pressed his GOP caucus on Cabinet confirmation and other votes in the first days of the Trump administration.

That slim majority could help Nevada with Yucca Mountain, Sabato said, noting that Heller could seek McConnell’s help because the issue could be important to his re-election.

“Heller is critical since the Senate is in GOP hands,” Sabato said. “And currently, he’s the only endangered Republican incumbent.”

And while Cortez Masto is a freshman, Sabato said there are 48 members in her caucus, which includes Democrats and two independents.

“If she can keep her caucus together on Yucca, then only a few Republicans, recruited by Heller, would be enough to deep-six this,” Sabato said.

Political pressure is mounting on Nevada officeholders, who oppose locating a nuclear repository near one of the nation’s premiere tourist destinations that draws 43 million people annually and generates $59 billion in revenue, according to the Las Vegas Convention and Visitors Authority.

Heller wrote a terse letter to Perry on Thursday expressing his disappointment with the secretary’s support of resumed licensing of Yucca Mountain “despite previously assuring me that you would look at all viable options.”

The senator urged Perry to join him in seeking an alternative for long-term storage of nuclear waste.

“I owe Nevadans the assurance that the Silver State will not serve as our nation’s nuclear waste dump,” Heller wrote. “I strongly urge you to reconsider your position on this issue.”