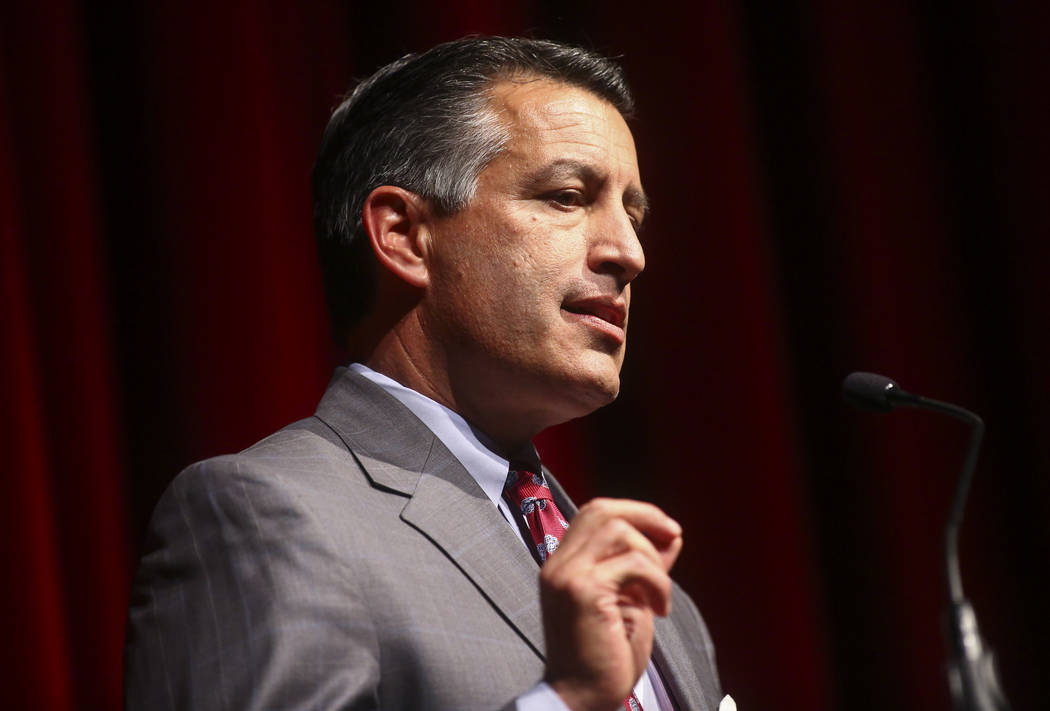 The governor again registered his opposition to the project and appealed to congressional leaders that Nevada should be viewed by the federal government as a “valued partner” in decisions about nuclear storage, “an ideal that often is not realized.”

Sandoval is the latest Nevada official to sound the alarm on 11th-hour efforts to secure some funding for the Yucca Mountain project after money was stripped out of an appropriations bill passed earlier this year for energy programs and projects.

A final spending bill has become a vehicle for various pieces of legislation that lawmakers and President Donald Trump want to use to fund projects and priorities before a new Congress is sworn-in next year.

Trump is expected to meet with Senate Democratic Leader Charles Schumer of New York and House Speaker-designate Nancy Pelosi, D-Calif., at the White House on Tuesday to discuss legislative issues.

The president has threatened a partial government shutdown could occur if lawmakers do not include his $5 billion request to begin building a wall along the Mexico border.

Schumer said the spending bill includes $1.6 billion for the Department of Homeland Security to secure the border, an amount that was negotiated by a bipartisan group of lawmakers. He said Democrats would not renegotiate, saying any responsibility for a government shutdown would be “on the president’s back.”

Sen. Catherine Cortez Masto, D-Nev., said there is bipartisan support in the Senate to get a final spending bill before next week’s deadline and to avert a shutdown.

“The only one who is going to hold this up at all is the president,” Cortez Masto said.

She said a shutdown, even a partial closure, is unlikely to occur because lawmakers on both sides of the political aisle see it as harmful.

“The only person talking about it is the president,” Cortez Masto said.

Meanwhile, Pelosi and a bipartisan group of lawmakers have urged that language be included in the final spending bill to protect the special counsel investigation into Russian meddling in the 2016 presidential campaign and ties to the Trump campaign.

Lawmakers who support reviving the licensing procedure for the Department of Energy’s application to develop Yucca Mountain are asking for funds and language to be tucked into the final spending bill.

That has drawn the ire of Cortez Masto and Sen.-elect Jacky Rosen, D-Nev., as well as Democratic Rep. Dina Titus of Las Vegas who first sounded the alarm last month that a move was afoot to include money in the bill despite a rejection of funding by the Senate earlier this year.

Sandoval weighed in Friday, with a letter dated Dec. 7 to McConnell, Schumer, Ryan and Pelosi urging that no funds be included in a final spending bill.

In his letter, Sandoval also urged lawmakers not to include language pertaining to licensing or permitting at the Yucca Mountain site.

The House voted overwhelmingly this year on legislation that would streamline the application process for Yucca Mountain and increase the capacity for nuclear waste at the location, which was designated by Congress in 1987 as the site for permanent storage.

Hearings on the license application by the DOE stopped after the Obama administration cut funding for the process.

The Trump administration has sought to revive the licensing process, even though Trump said during a campaign event this year that he agrees with Nevada’s opposition to the project.

Only the state’s rural counties, including Nye where Yucca Mountain is located, support continued licensing hearings on the application.

Supporters of opening the Yucca Mountain site are trying to get funding in the bill to restart the licensing process after eight years.

As the Dec. 21 deadline to pass the spending bill nears, some Republicans are eyeing the legislation as the last option to pass legislation before the Democrats take control of the House.

But even GOP leaders, like McConnell, are trying to beat back last-minute add-ons to the bill, such as a bipartisan criminal justice bill that has opposition in the Senate.

Republican senators also see the bill as an avenue to pass legislation to crack down on the Saudi government with sanctions for its involvement in the murder of a journalist.

The Trump administration has balked at punishing the Saudis despite reports from U.S. intelligence that the government under the crown prince was directly involved in the journalist’s death.