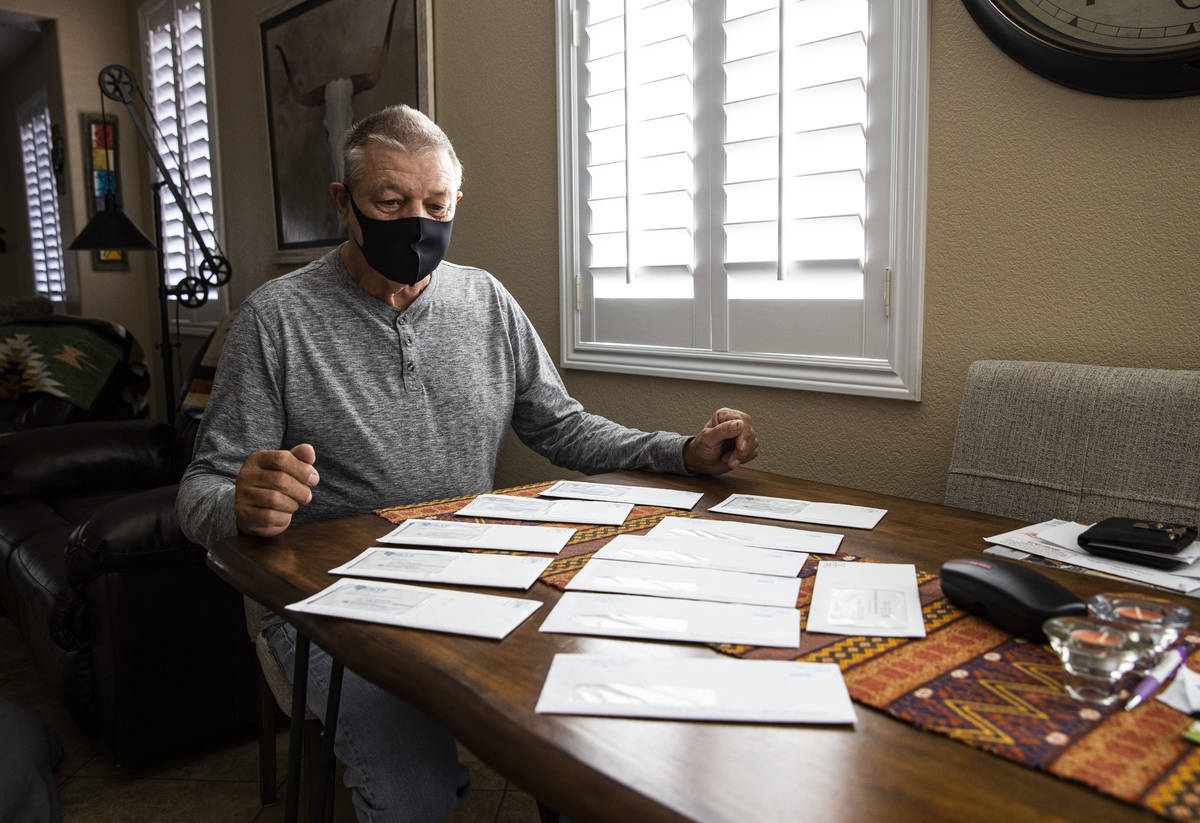 Graeme Lovatt shows some of the many letters from the Nevada Department of Employment, Training and Rehabilitation, that have been addressed to different people using his home address in Las Vegas on Tuesday, Oct. 13, 2020. (Chase Stevens/Las Vegas Review-Journal) @csstevensphoto 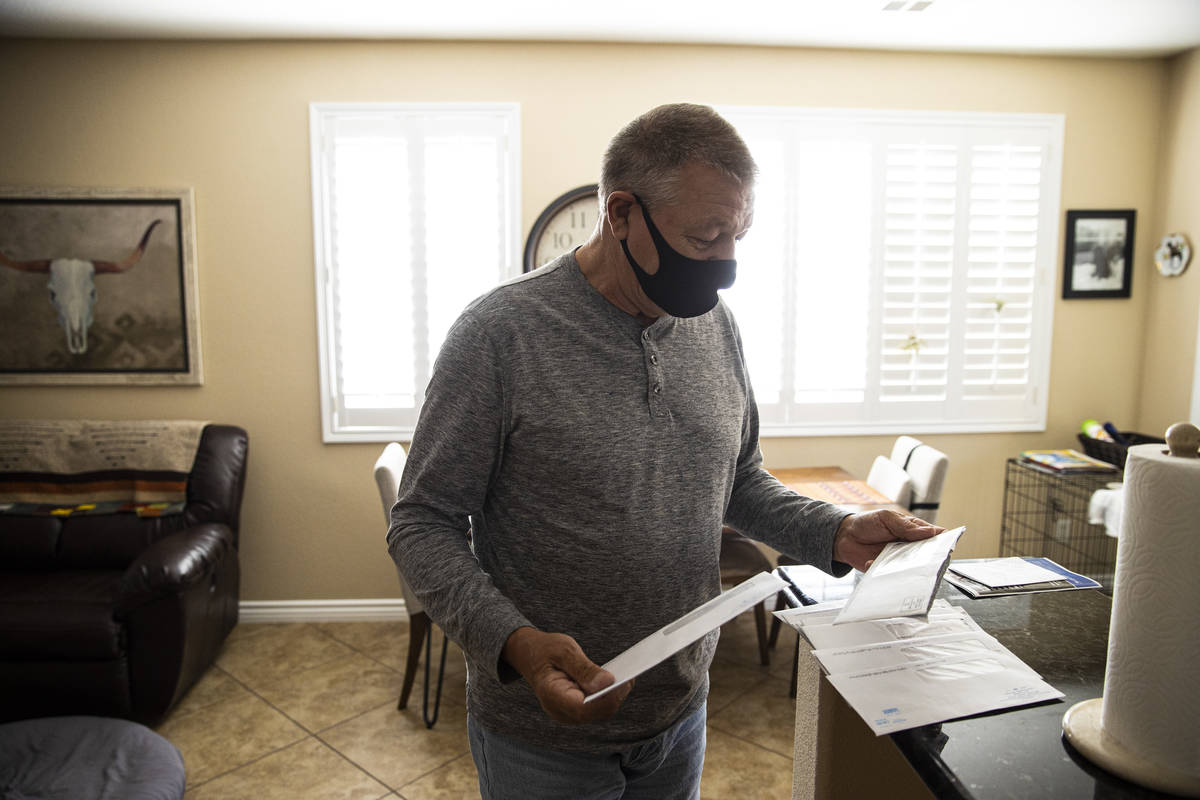 Graeme Lovatt shows some of the many letters from the Nevada Department of Employment, Training and Rehabilitation, that have been addressed to different people using his home address in Las Vegas on Tuesday, Oct. 13, 2020. (Chase Stevens/Las Vegas Review-Journal) @csstevensphoto

Tens of thousands of Nevadans are still waiting to be approved for jobless benefits, but Graeme Lovatt wasn’t happy when he received approval letters with debit cards from the state Department of Employment, Training and Rehabilitation.

Lovatt, who has worked in concrete construction for 40 years, has a job and didn’t apply for financial assistance from DETR. Over the course of several weeks, he received 16 envelopes from the agency, all bearing different names. Many included DETR-issued debit cards. Someone even tried getting his mail diverted to another Las Vegas address.

“The first week, I got three in the mail,” Lovatt said, “but then when the others started coming every day the following week, I knew that something’s wrong.”

State unemployment systems throughout the country, including in Nevada, have been targeted by criminal organizations and individuals who use stolen identities to exploit the stimulus benefits offered because of the COVID-19 pandemic.

The agency has received more than 704,000 initial claims for unemployment insurance through the week ending Oct. 3, nearly 97 percent of which have been filed since mid-March. DETR estimates that hundreds of thousands of applications have been filed fraudulently.

DETR said it is “actively working with law enforcement entities and the Department of Labor to detect, prevent and address unemployment fraud.” Nevada employers and individuals who believe they have been a victim of unemployment fraud are asked to file a report with a form on DETR’s website.

”While we understand the interest regarding potentially fraudulent claims, we cannot comment or provide any details about claims being investigated for potential fraud or on specific measures and processes used in unemployment insurance,” Rosa Mendez, a spokeswoman for DETR, said in a statement to the Review-Journal.

Criminals are estimated to have pocketed an estimated $26 billion meant for jobless Americans as part of the federal coronavirus relief package, according to an August report by the U.S. Department of Labor inspector general.

“I couldn’t get anywhere or get an answer, or speak to anyone,” he said. “I’m basically just sitting on these envelopes right now with no idea where to go.”

Elisa Cafferata, the acting director at DETR, told the Review-Journal in September that there are an estimated 100,000 to 200,000 unemployment applications filed with the agency flagged as fraudulent.

Lovatt said he received a change-of-address mail from the U.S. Postal Service that someone requested mail be directed to a new address.

“That really put up a red flag for me,” Lovatt said. “We’ve been going to the mailbox every single day now just in case. It seems to me like somebody is going to start breaking into my mailbox looking for these envelopes. It’s really worrisome.”

Lovatt said he doesn’t think it’s a computer bug issue at DETR that is diverting mail to his address.

“If this is a computer glitch that just picked up dozens of names and inadvertently sent it to my address,” he said. “The thing is, why would DETR even have my address? I’ve never applied for unemployment. If someone puts it once by mistake, you could understand, but eight or ten different envelopes? No that’s just not right.”

Cynthia Krause, the office manager at Luxury Homes of Las Vegas, has spent dozens of hours to resolve DETR’s mistake in sending unemployment benefits to fraudsters in New York and New Jersey since March.

Krause said fraudsters applying for unemployment listed Luxury Homes of Las Vegas as closed and out of business, according to the letters from DETR her office gets.

“We didn’t get notified until August, four or five months after they had already started sending out the cards …” she said. “No one ever checked with our office: ‘If you guys are closed and gone under, how are you paying employment taxes and salaries to your employees?’ Common sense is common sense.”

Krause and her team spent hours trying to correct DETR’s misinformation. They even used a binder to store all the letters from the state agency. Krause has changed the passwords on DETR’s website on several occasions.

“We changed passwords, we changed the information, and the following week, it was changed back,” she said.

Cafferata told the Review-Journal in September that internal fraud cases hadn’t come across her desk, though “there may be one or two things that are working through the process.” Mendez declined to provide an update Wednesday.

Fraudsters got the names of the owner of the company, the receptionists, and real estate agents.

“They were sending out unemployment money under the pretense they were making $60,000 every other week,” she said.

In one letter, it shows that DETR paid out $10,296. Krause said the New York and New Jersey addresses are both senior living communities.

“I started researching this, but I’m busy. I manage this office and I’m trying to help them. But then I realize they don’t want our help and don’t really care whether or not we stop this,” she said.