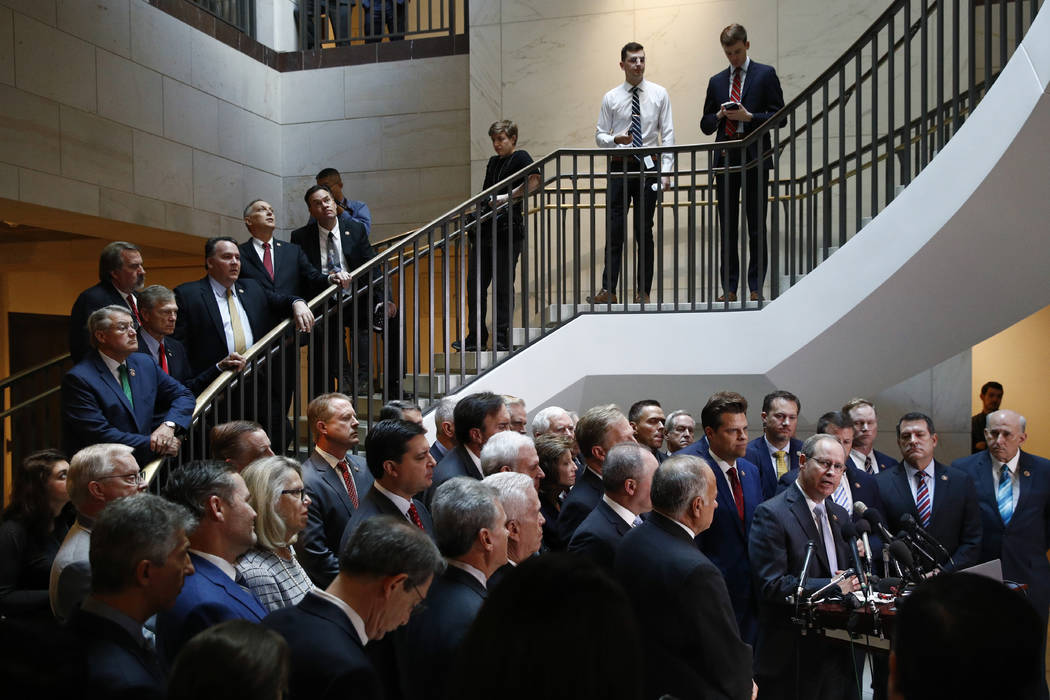 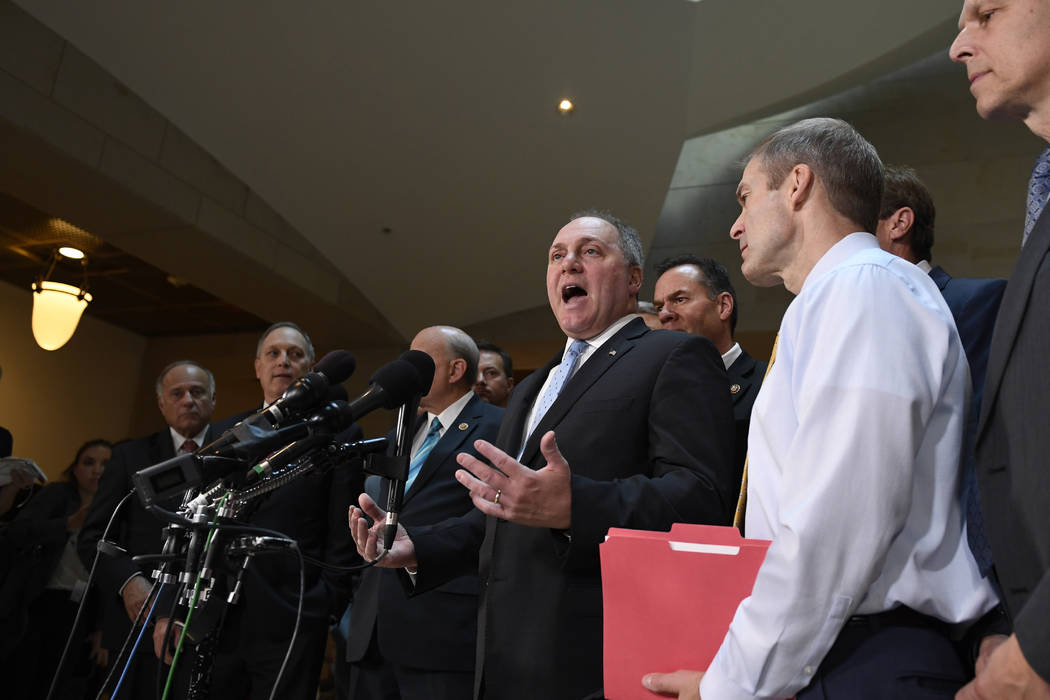 House Minority Whip Steve Scalise, R-La., center, standing with other House Republicans, talks to reporters on Capitol Hill in Washington, Wednesday, Oct. 23, 2019, outside the area where witnesses are interview in the impeachment inquiry. (AP Photo/Susan Walsh) 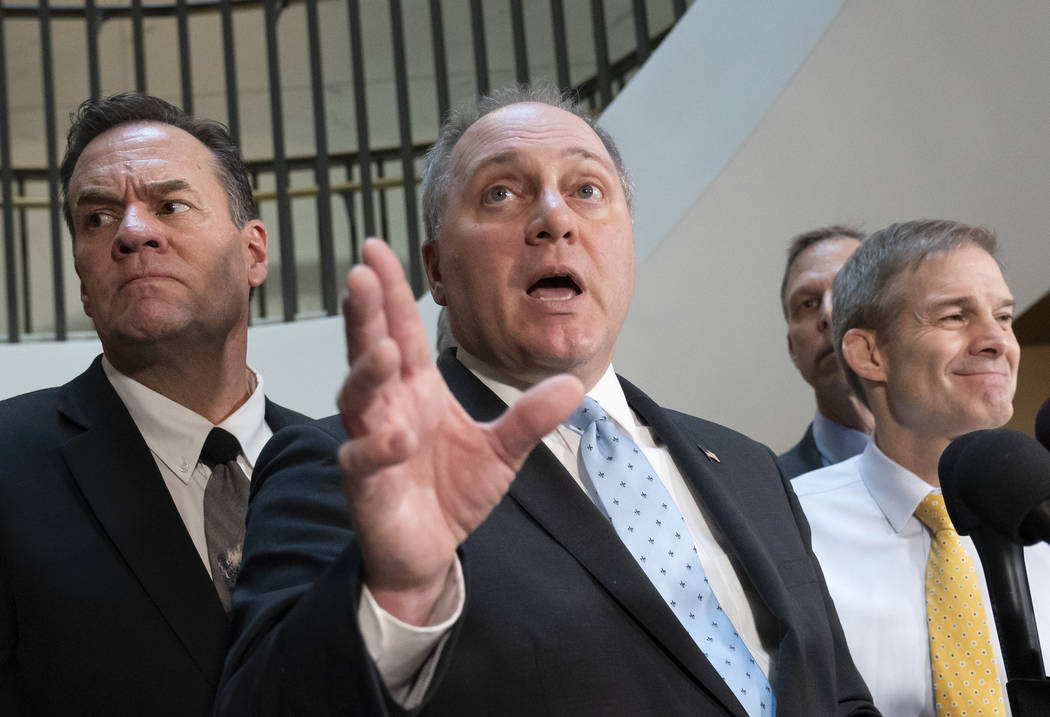 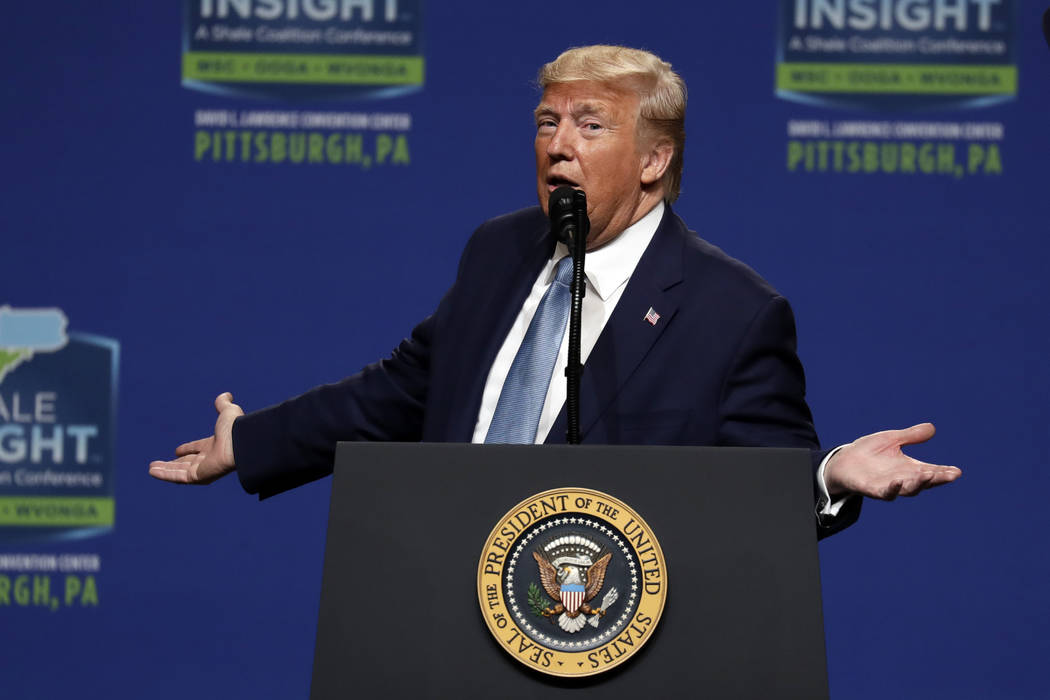 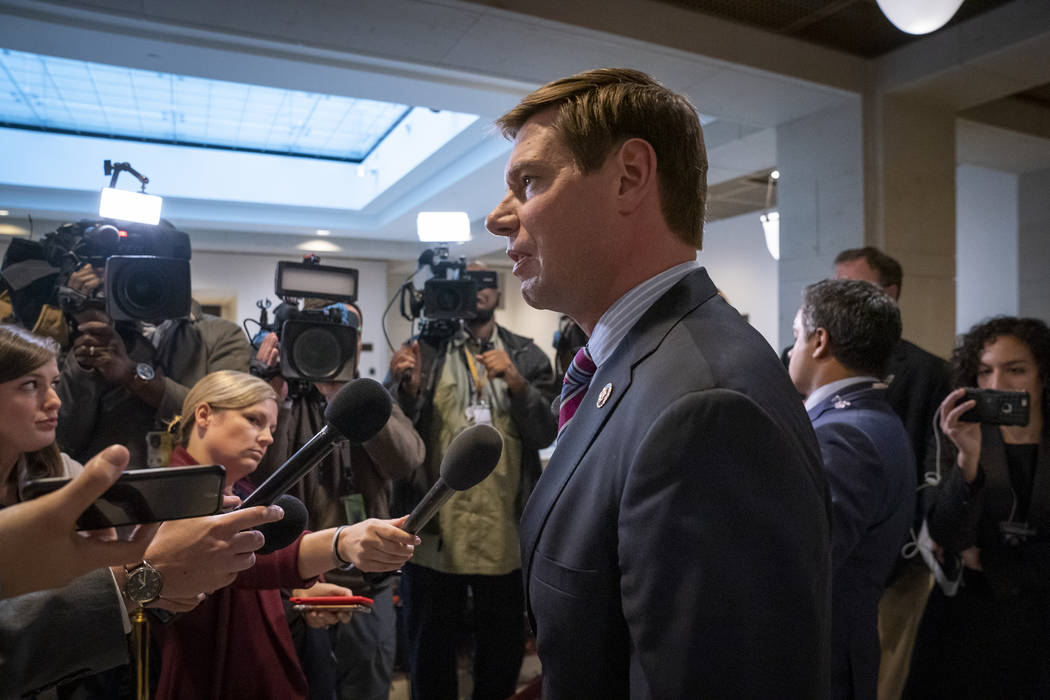 WASHINGTON — They pleaded ignorance, saying they’d not read the diplomat’s damning statement. They condemned the Democrats’ tactics as unfair. They complained that the allegations against President Donald Trump rested on second- or third-hand evidence.

The Never Trumper Republicans, though on respirators with not many left, are in certain ways worse and more dangerous for our Country than the Do Nothing Democrats. Watch out for them, they are human scum!

Wednesday was a day of careful counterargument by congressional Republicans, the day after America’s top envoy in Ukraine gave House impeachment investigators an explosive, detailed roadmap of Trump’s drive to squeeze that country’s leaders for damaging information about his Democratic political rivals.

Most Republicans were still standing by Trump but in delicately calibrated ways after Tuesday’s closed-door testimony by acting ambassador William Taylor. And as lawmakers struggled to balance support for Trump with uncertainty over what might still emerge, some were willing to acknowledge the strains they were facing.

Asked if Taylor’s testimony was a rough day for the White House and Republicans, No. 2 Senate GOP leader John Thune of South Dakota said, “Probably one of many.”

“Obviously, we have a lot of incoming right now,” Thune said. “That’s the nature of the beast.”

White House officials, who have been treating unified Republican support for Trump as a given, have grown increasingly fearful of defections in a potential impeachment vote by the Democratic House and even in an eventual trial in the Republican Senate.

While officials don’t believe there will be enough votes to remove the Republican president, as Democrats hope, the West Wing believes more must be done to shore up party support to avoid embarrassment and genuine political peril.

Some Trump allies also believe the White House must directly address the increasingly troubling revelations. They note that as more Trump appointees offer disparaging information to Congress, he will have increasing difficulty arguing simply that he is the target of a new “witch hunt.”

Several of these concerned supporters spoke on the condition of anonymity to discuss the growing private worries.

White House officials said they have added a regular call with select GOP lawmakers to discuss impeachment strategy, plus more meetings with Republicans at the White House and Camp David. They said communications teams from the White House and Congress coordinate three times a week with phone calls.

But there still are complaints from Capitol Hill about a lack of a sophisticated messaging strategy.

Two GOP aides, speaking on the condition of anonymity to discuss internal tactics, said White House coordination has been insufficient. They cited a lack of daily emails or White House briefings of reporters from which lawmakers could take a daily messaging cue.

Via tweet, Trump has asserted that witnesses haven’t said the Ukrainians were aware that military aid was being withheld, thus clearing him of accusations that he was insisting on a trade-off for political dirt.

“You can’t have a quid pro quo with no quo,” he quoted Rep. John Ratcliffe, R-Texas, as telling Fox News.

However, The Associated Press and others have reported that Ukrainian leaders were indeed aware of the threat of losing aid that Ukraine needed to counter Russian military efforts. Closed-door testimony has shown that new Ukrainian President Volodymyr Zelenskiy was worried that a White House meeting he desired with Trump was in jeopardy.

Trump lashed out Wednesday at critical members of his own party, tweeting, “Never Trumper Republicans” are “in certain ways worse and more dangerous for our Country than the Do Nothing Democrats.”

“They are human scum!” he fumed.

Reports of Taylor’s testimony led most newscasts, websites and newspapers late Tuesday and Wednesday. But underscoring the desire of Republicans to avoid focusing on the allegations about Trump’s actions, many asserted ignorance of what Taylor had said.

“I didn’t see it, I didn’t hear it and I’m not going to take a third-party description of it,” said Sen. Jim Risch of Idaho.

Taylor detailed conversations in which he said administration officials told him Trump was conditioning Ukrainian military aid and an Oval Office visit coveted by Zelenskiy on Ukraine probing Democrat Joe Biden and his son and allegations of interference in the 2016 election.

Taylor is a career diplomat who has served overseas for presidents of both major political parties. Under Trump, he was appointed to take charge of the U.S. Embassy in Kyiv earlier this year after Trump had the ambassador removed.

Kasich, also a nine-term congressman, said he has noticed “a couple cracks” in the Republican wall that’s stood up for Trump and against impeachment.

“There’s no surprise in the fact, in an era of tribalism, that there is sort of a solid wall, (a wall) that appears to be getting weaker, in a way,” he said. “This is serious stuff.”

The GOP drew more attention to the secrecy on Wednesday when around two dozen House Republicans not directly involved in the investigation barged into a deposition of a Defense Department official. The move delayed the day’s interview by five hours and drew a slap from Republican Sen. Lindsey Graham of South Carolina, who called the tactic “nuts.”

Much of the House inquiry has unfolded behind the closed doors of secure offices in the Capitol Visitors Center. Alongside the Democrats, GOP members of the three House committees heading the investigation have been in the room as diplomats and other officials have testified. Democrats have said they expect to hold public hearings later in the process.

One administration official said Trump was aware of and encouraged the House effort to object to the secrecy of the impeachment proceedings Wednesday. That official was not authorized to discuss the issue by name and commented only on condition of anonymity.

In Taylor’s 15-page opening statement obtained by the AP and other news organizations, the diplomat named administration officials who he said told him Trump had demanded of the Ukrainians an investigation of Burisma, a Ukrainian gas company that once employed the son of former Vice President Biden. The elder Biden is running for the 2020 Democratic presidential nomination.

Trump also wanted Ukraine to probe a conspiracy theory about a Democratic computer server that was hacked during the 2016 presidential election.

Trump has also complained repeatedly about the House process. He has used that argument to justify his order for administration officials not to comply with requests for documents and interviews.

Some continue to show up — under House subpoena. Yet Trump’s officials, sticking to their guns, are counting on his complaints to resonate with voters next year.