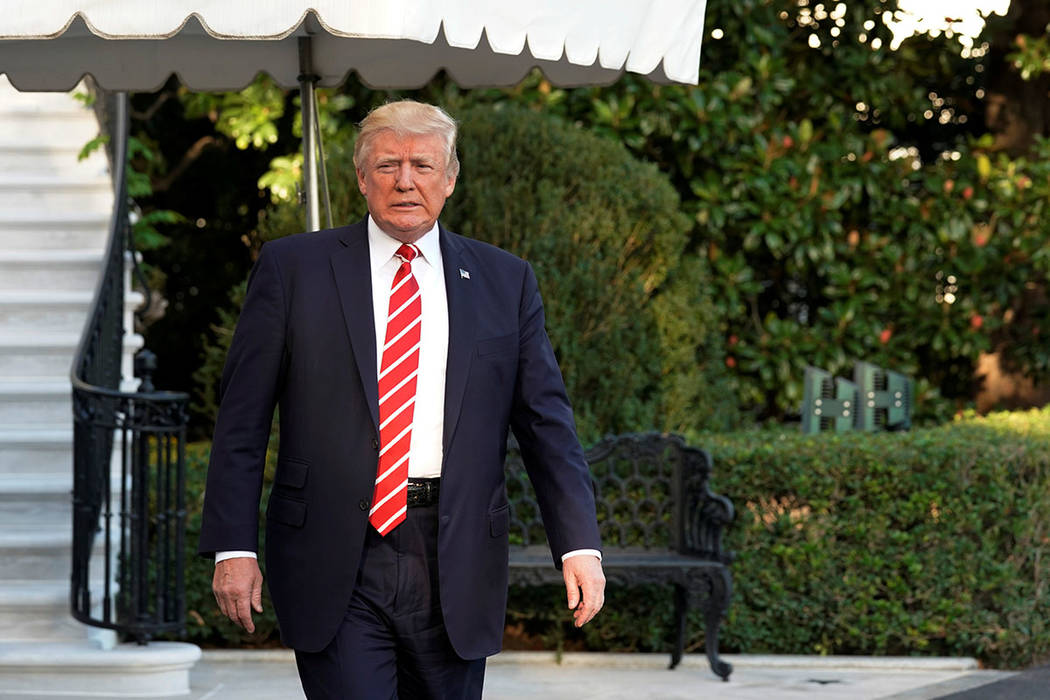 President Donald Trump walks out from the White House in Washington before his departure to Greensboro, North Carolina, on October 7, 2017. (REUTERS/Yuri Gripas)

WASHINGTON — Republican U.S. Senator Bob Corker warned on Sunday that President Donald Trump risks setting the nation “on the path to World War Three” in an interview with The New York Times, the latest in a series public barbs traded over the day.

Trump had blamed his former political ally for the Iran nuclear deal in a series of derisive Twitter posts that drew a sharp riposte from Corker, who chairs the important Senate Foreign Relations Committee.

In a sweeping, 25-minute interview, Corker told the newspaper he was alarmed about a president who acts “like he’s doing ‘The Apprentice’ or something” — in a reference to the reality television show that Trump had once hosted.

“He concerns me. He would have to concern anyone who cares about our nation,” the senator, who announced his retirement last month, said.

Corker dismissed the idea that Trump may be using provocative comments about North Korea to advance U.S. negotiations being conducted by Secretary of State Rex Tillerson by playing “bad cop” to the top diplomat’s “good cop” effort to broker a deal with Pyongyang.

“I know he has hurt, in several instances. He’s hurt us as it relates to negotiations that were underway by tweeting things out,” Corker told the paper, which added that Corker did not provide details about negotiations. “A lot of people think that there is some kind of ‘good cop, bad cop’ act underway, but that’s just not true.”

Corker had been a national security adviser to Trump during the 2016 presidential campaign and on Trump’s short-list last year for both vice president and secretary of state.

But the relationship between the two men has greatly deteriorated.

Senator Bob Corker "begged" me to endorse him for re-election in Tennessee. I said "NO" and he dropped out (said he could not win without…

..my endorsement). He also wanted to be Secretary of State, I said "NO THANKS." He is also largely responsible for the horrendous Iran Deal!

…Hence, I would fully expect Corker to be a negative voice and stand in the way of our great agenda. Didn't have the guts to run!

More recently, Corker has criticized Trump, taking issue with the president’s response to a white supremacist demonstration in Charlottesville, Virginia, in August. Critics assailed Trump for saying rival protesters were also to blame for violence.

“Senator Bob Corker “begged” me to endorse him for re-election in Tennessee. I said “NO” and he dropped out (said he could not win without my endorsement),” Trump wrote. “He also wanted to be Secretary of State, I said “NO THANKS.” He is also largely responsible for the horrendous Iran Deal!

“Hence, I would fully expect Corker to be a negative voice and stand in the way of our great agenda. Didn’t have the guts to run!”

An hour later Corker tweeted back: “It’s a shame the White House has become an adult day care center. Someone obviously missed their shift this morning.”

Corker’s chief of staff, Todd Womack, said Trump called the senator last Monday, asked him to reconsider his decision not to seek re-election in 2018, “and reaffirmed that he would have endorsed him, as he has said many times.”

Trump’s dispute with Corker could also have implications for the president’s policy goals of repealing Obamacare and passing tax reform. Republicans control both houses of the U.S. Congress but hold only a narrow majority, 52-48, in the Senate, which means Trump has only a slim margin for potential defections from within his own party on legislation.

Even before Trump’s Twitter attacks on Corker, the senator has said he would have difficulty supporting any tax package that added to the federal deficit, posing a potential hurdle for the president’s tax plan.

“Bob Corker gave us the Iran Deal, & that’s about it,” Trump posted on Twitter later on Sunday. “We need HealthCare, we need Tax Cuts/Reform, we need people that can get the job done!”

On Iran, Trump is expected to disclose within days a plan to decertify the 2015 international nuclear agreement with Tehran, putting the agreement’s future in the hands of Congress, where Corker would play a central role in determining its fate.

Trump has long criticized the pact, a signature foreign policy achievement of Democratic former President Barack Obama in which Iran agreed to reduce its nuclear program in exchange for easing of international sanctions.

During the U.S. political fight over the agreement, which was opposed by every Republican in Congress, Corker co-wrote the law that required congressional approval for the deal and required the president to certify that Iran was complying every 90 days.

Some critics on the far right have blamed Corker for that measure, which they say helped push the pact through Congress.

The two-term senator’s retirement is a blow to a Republican Party struggling to balance divisions between mainstream and more populist wings.

Asked last week about reported tensions between Trump and Tillerson, Corker responded with what was seen as a jab at Trump.

He described Tillerson, Secretary of Defense James Mattis, and White House Chief of Staff John Kelly as “those people that help separate our country from chaos.”

After Charlottesville, Corker said, “The president has not yet been able to demonstrate the stability, nor some of the competence, that he needs to demonstrate in order to be successful.”